A second Melbourne resident in a month has set themselves on fire in protest against Victoria’s insane vaccine mandate which has forced hundreds of thousands of people out of work:

Man sets himself on fire in #Melbourne over #VaccineMandates. pic.twitter.com/kbdbYlqzhQ

A man has deliberately lit himself and his car on fire in front of horrified diners while screaming about Victoria’s Covid-19 vaccine mandates.

The man emerged from a silver hatchback which was engulfed in flames near Church St in Richmond  about 8pm on Saturday.

Police officers and firefighters doused the man with water to extinguish the flames.

Around five witnesses restrained the man before officers pinned him to the ground.

The man was then escorted by officers into an ambulance before he was rushed to hospital with life-threatening injuries.

One witness who helped restrain the man, told The Herald Sun the man’s flesh was burning before the flames were put out with water.

‘His skin was burning. He was on fire,’ she told the news outlet.

‘He was off his face screaming about the mandates.’

Lydia O’Connor was having dinner at a nearby restaurant when she heard the man screaming.

‘He poured gas on himself and on his car. It was on purpose,’ Ms O’Connor said.

Extreme incidents became the norm in 2021 as lockdowns and vaccine mandates sent ordinary people over the edge. In December 2021 a woman in Werribee set herself on fire in protest over vaccine mandates. That incident was mostly ignored by the Lying Press, however this latest self immolation appears to have gained too much attention to be ignored.

Northern Territory Chief Minister Michael Gunner revealed that he and his family had received death threats, and he had to move his family after threats were made online. Western Australian Premier Mark McGowan received death threats, while Victorian Premier Daniel Andrews’ electoral office shut down after receiving a suspicious package. He was also forced to make a hasty exit from a Bendigo university, and a man was arrested on the steps of Victorian Parliament carrying some kind of high powered bow.

Even in 2020, Daniel Andrews was told that 10 percent of all suicides in Victoria are lockdown-related.

It is likely that as long as the vaccine mandate remains in place the level of violence in Victoria will continue to escalate. 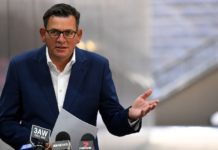