Crowd numbers for the rallies against lockdowns, vaccine mandates and Daniel Andrews’ insane legislation to become Dictator for Life are growing, and it is terrifying members of Antifa front group CARF.

The general grievances of Victorians are coalescing into a strong movement to oust Daniel Andrews from power. A fortnight ago, several thousand rallied outside state parliament. 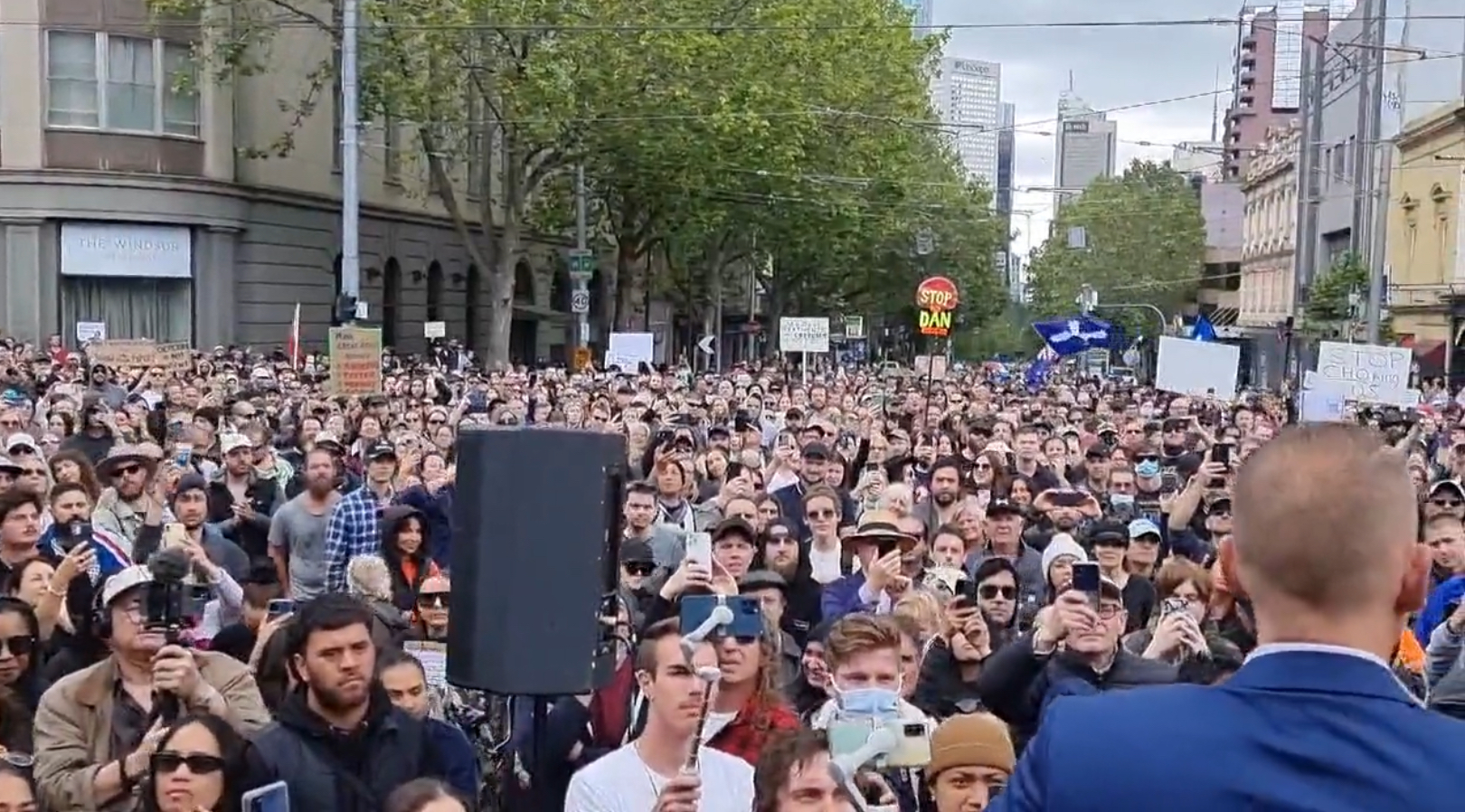 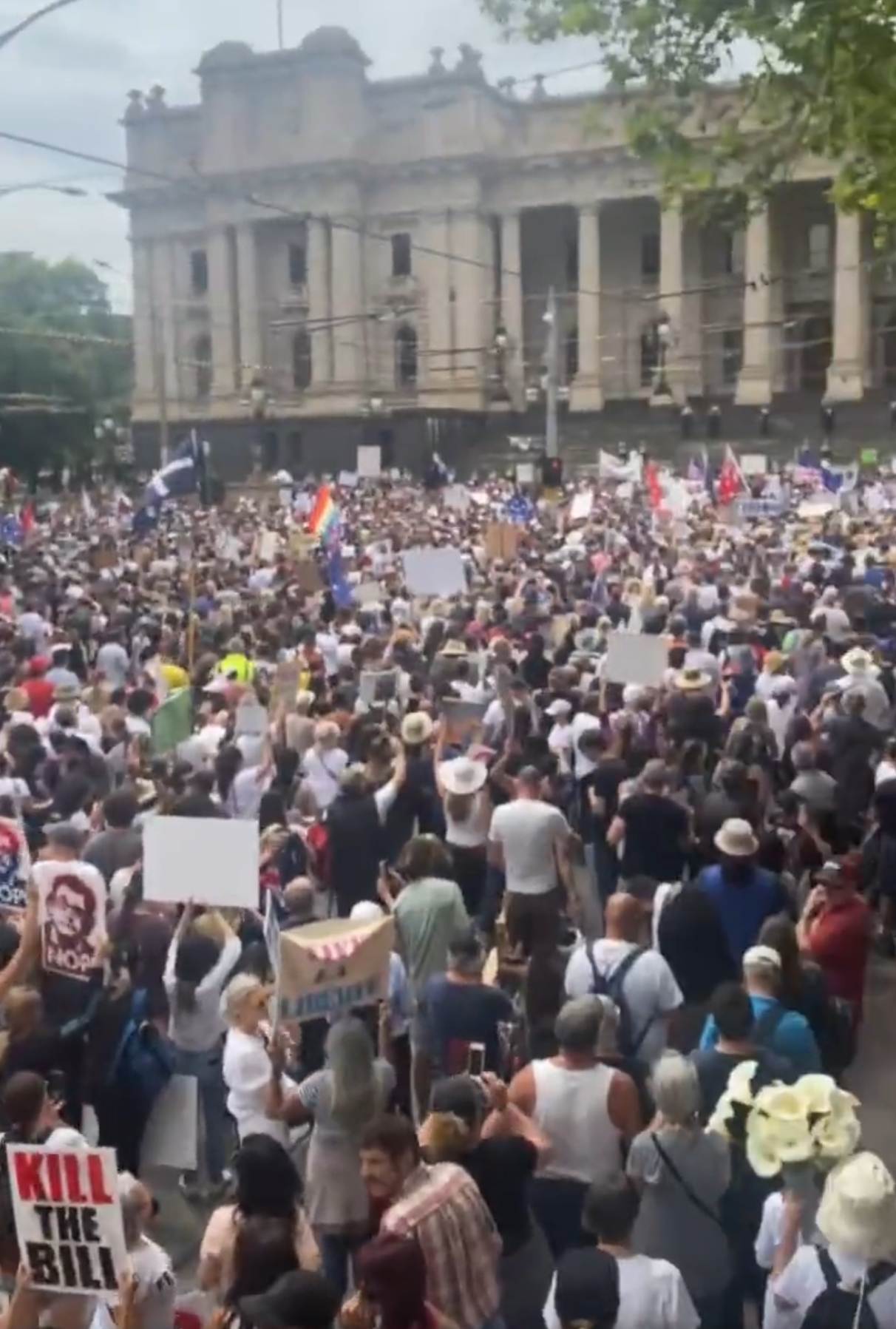 Antifa’s role is to inflict violence on anybody who publicly opposes any aspect of the liberal project to destroy Western Civilisation. They have historically been given free reign to do whatever they want to whomever they want, knowing that the police won’t arrest them, the courts won’t prosecute them and that the Lying Press will take their side.

Antifa are thus the designated instrument of state terror, the tacit enforcement arm of Liberal Tyranny.

Intriguingly, they have been outflanked over the last 18 months. For most of the lockdown period they were content to let Victoria’s militarised police force do the bashing of ordinary people.

But people kept protesting, because the tyranny was just so obvious.

It wasn’t until a crowd of furious tradies temporarily occupied one of their bases of operation, the CFMEU building on Elizabeth Street, that they realised they had to take the anti-lockdown and anti-vaccine mandate movement seriously.

Their response has been some cringe fliers posted around junkie central in Collingwood and a pitifully small counter protest in Brisbane. This over the top bootlicking has completely exposed them as the establishment shills that they are. 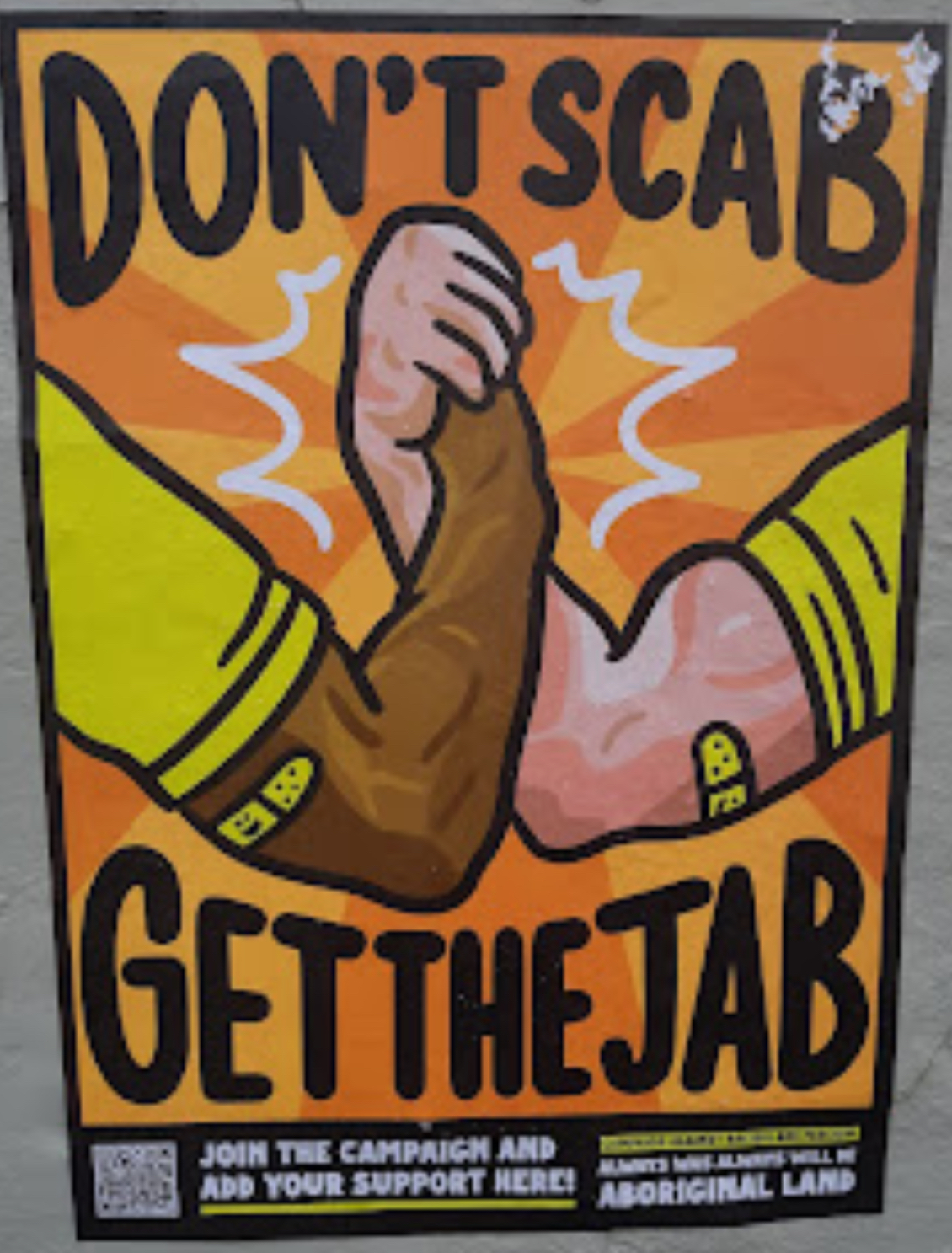 They have also held Zoom meetings to try to build some kind of coalition and brainstorm ideas to counter the Wrath of the Awakened Saxon. 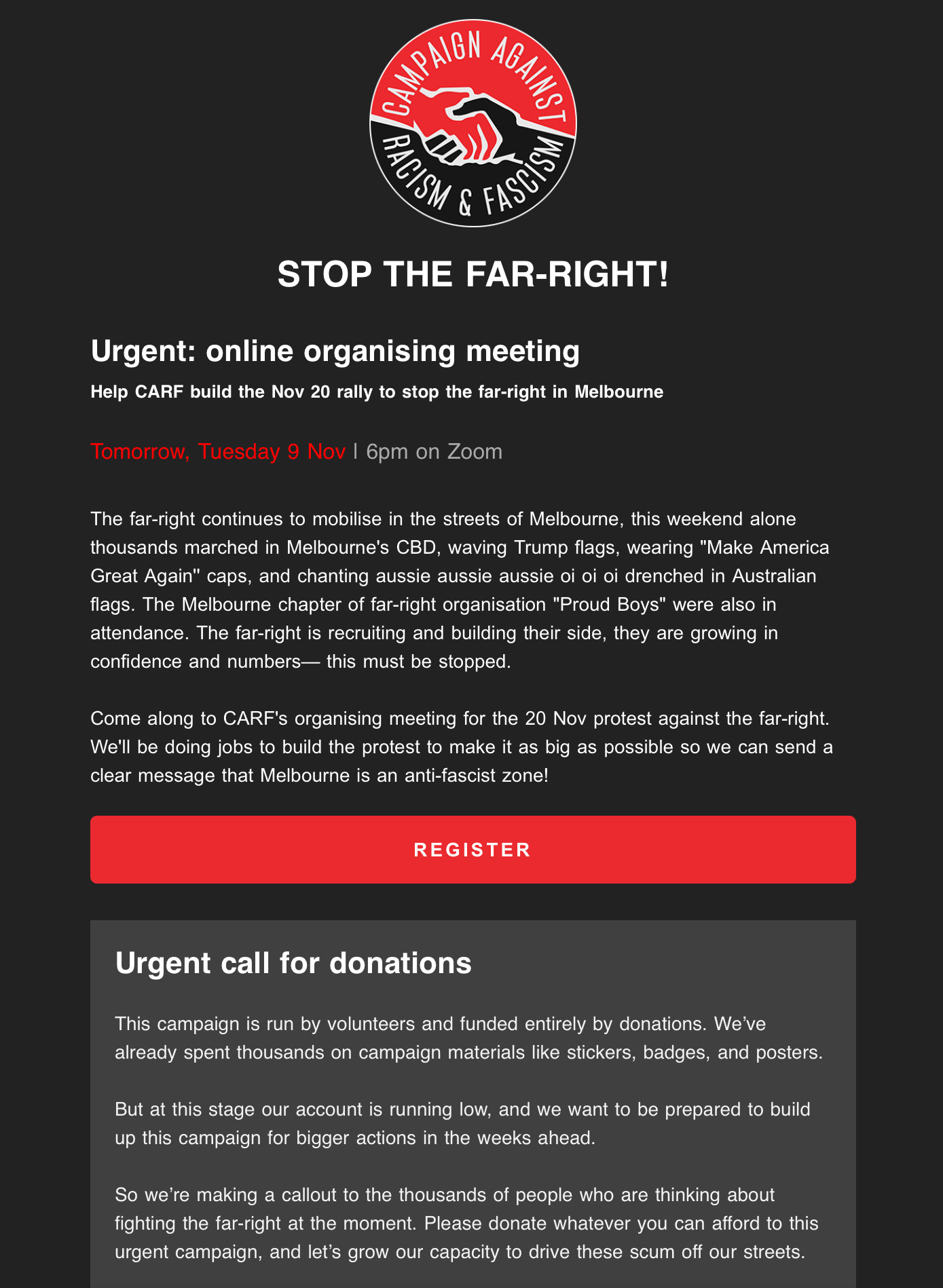 This has merely opened them up to being filmed by infiltrators so we can laugh at how pathetic they are.

The “anti-fascists” at CARF don’t like you having a voice.
They’re planning to cause trouble on Nov. 20th across Australia. pic.twitter.com/1NrQiv8edH

Am I the only one who finds it weird that these leftist organisers always have foreign accents?

Rise Up! Melbourne are organising another rally tomorrow, Saturday November 13 at 12pm at the State Library in Melbourne, with the plan being to march to Parliament House. 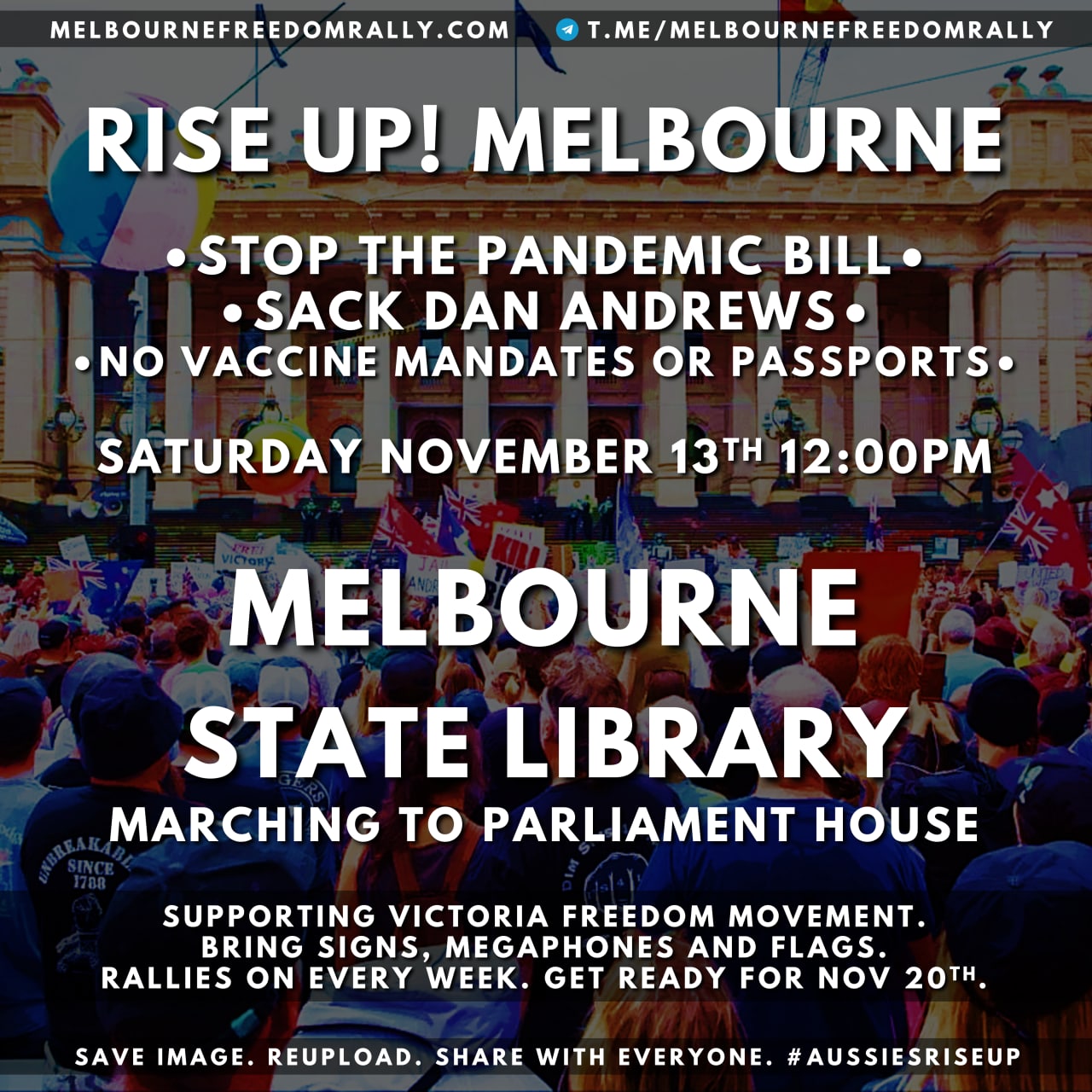 The Worldwide Freedom Rally are organising national protests the following weekend, Saturday November 20 at 12pm. In Melbourne they look likely to just plonk themselves right outside Parliament House and stay there. 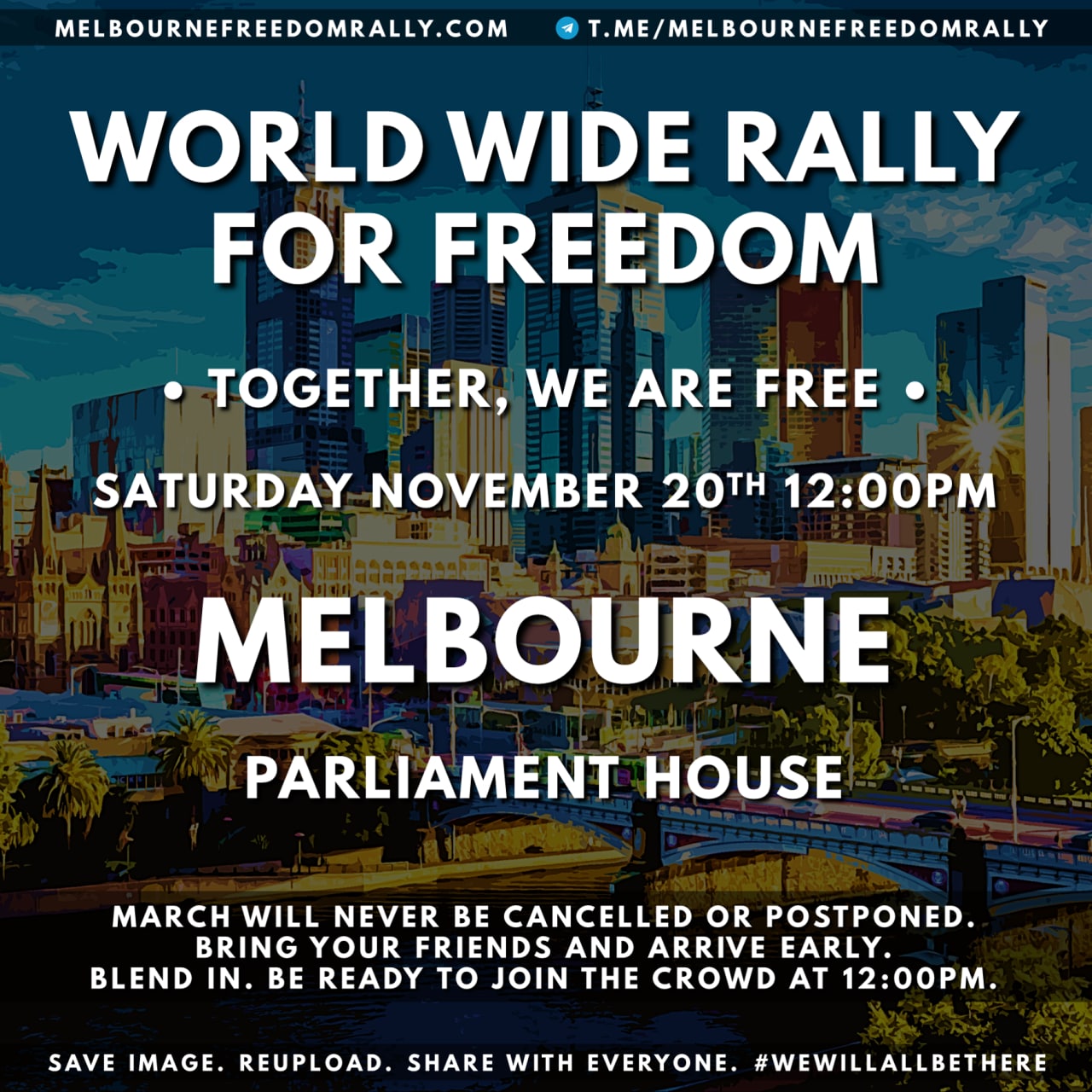 You can find updates on these events courtesy of Melbourne Freedom Rally at Telegram, Twitter and their website.

The crowds are expected to grow, as is the anxiety of Melbourne’s Marxists. Police violence didn’t work. Police infiltration didn’t work. Massive fines and mass arrests didn’t work. Since the end of lockdown, the crowds have only gotten bigger.

The ace in Antifa’s hole, so to speak, is the use of violence themselves. XYZ News has reported that they believe violence is the way to counter the anti-lockdown movement:

“Relentless counter-protests did not defeat Reclaim Australia. Far left terrorist organisations such as Antifa deliberately beat up ordinary people at those protests. You might think this was terrible optics but it was actually brilliant optics. The violence deterred ordinary Mums and Dads from turning up with their kids and grandparents.”

At this point though, what difference would it make? Anti-lockdown activists have already been hardened by 18 months of police brutality. They know that if they act as one they can force entire squads of police cars into a humiliating retreat.

If Antifa/CARF tries to pull violence at rallies in coming weekends, they won’t be up against several thousand mums, dads and grandmas who are worried about the vague encroachment of Islam while ignoring the vast numbers of Chinese who are quietly building their own suburbs all for themselves.

They will be up against tens of thousands of ordinary Aussies who have nothing left to lose.

That will be an entirely different prospect.