Watching from overseas it seemed that nobody was going to step up in Australia. There was no fighting spirit. There was no pushback against the Communist takeover of the country with the excuse of an annual outbreak of the sniffles. What few protests were organised were brutally crushed by police who now look like participants from the Thunderdome, garbed head to toe with outlandish body armor and tactical crowd control weapons. Freely used in the face of seventy year old ladies everywhere.

Melbourne now holds the dubious distinction of being the most locked down city in the world. A condition that rests entirely with its rabid Marxist leader, known locally as Dictator Dan or Chairman Dan. But finally one group has stood up to the takeover. Construction industry workers, colloquially known as tradies in Australia, have today finally shown the backbone that has been missing down under for so long.

At 1159pm this Wednesday evening, all construction workers in Victoria need to be jabbed or they will be banned from traveling for their work. The largest of the construction unions in Victoria is the CFMEU. It is also the most powerful and militant union in the entire country. Today on the streets of Melbourne outside its large office, its members gathered to demand that the union boss, John Setka, stand up to the Victorian government on their behalf.

Where the fuck are your boys (John Setka) we pay your wages!!

That’s Setka standing off to the side in the black CFMEU T-shirt. Make no mistake, he is one of the most well known faces in Victoria. The man with the loudspeaker talks about Communism and how that is what we are fighting in Australia. Notice that no police are to be seen. This crowd is a far different bunch than grandmothers on a Saturday afternoon. This is a fighting crowd. And when they didn’t like what their own union leader had to say, this was their reaction.

That’s how you do it. They completely trashed the proud office of their own union, I repeat, the most powerful union in the entire nation. This would have been simply unthinkable a year ago. It’s going to be the working class man who saves Australia. The same boys who stormed Gallipoli, who were the rats of Tobruk and the Diggers on the Kokoda trail. Hilariously, news reports have described them as being “far-right”. Perhaps they all took a questionnaire.

And if you think that this sort of thing is counterproductive, a few hours after these unbelievable scenes the following press statement was released by the combined construction union body. 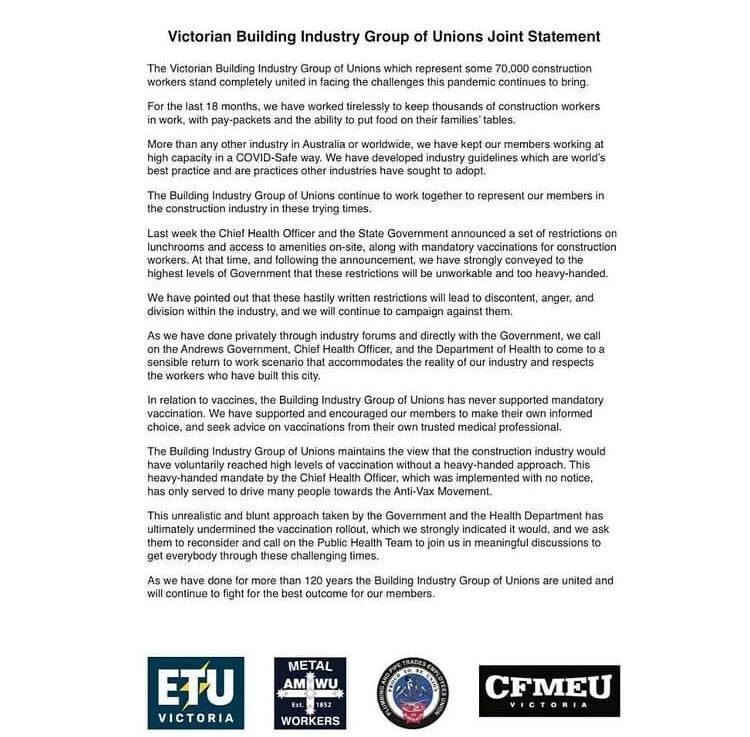 That statement was released for one reason and one reason only – the union leaders are shit scared. The lads protesting at one point chanted, “you work for us!” These unions can only make million dollar donations to the same Labor party that has caused this mess thanks to the dues paid by their members. And what did Dictator Dan of the Victorian Labor Party do in response to this affray?

He shut down the entire industry.

The Andrews government has ordered an immediate shutdown of Victoria’s $22bn construction industry following violent protests in which union members joined forces with anti-vaxxers, smashing the windows of the CFMEU’s headquarters, throwing flares and projectiles, and hurling abuse at union boss John Setka.

The decision came after more than a week of threats from the government to close worksites, after the industry was linked to hundreds of Covid-19 cases and the seeding of the virus into ¬regional local government areas.

Dan Andrews has no other card to play. He acts like a heavy but he is weak as piss. Those men outside their union headquarters are real heavies. This was the scene from the inside of the building as the union leaders attempted to hold their own members at bay.