Let’s start with the highlight. If you watch only one video from this small collection, watch this.

A violinist played a heart-felt version of the Australian national anthem to thousands of people outside state parliament in Melbourne, Victoria yesterday. The crowd became silent out of respect, and also to listen to some beautiful music.

Yesterday’s rally was held to protest against the vaccine mandate being introduced across Victoria and the rest of Australia, and against new laws which are being pushed through parliament which would give Daniel Andrews the power to essentially remain Dictator for Life.

Two stunning aspects about this rally stand out. Firstly, the numbers:

Melbourne This is Epic It’s Rocking like no tomorrow… Long Live Freedom pic.twitter.com/xv9SIhPqe3

Secondly, there was no violence:

Why was there no violence? Simple. Victoria Police stood back and allowed the rally to proceed. Unlike rallies which were held during the lockdown, no rubber bullets were fired. Nobody was slammed face first into the concrete. Nobody had a rifle butt smashed into their spine:

As far as XYZ is aware, nobody got run over by a tank: 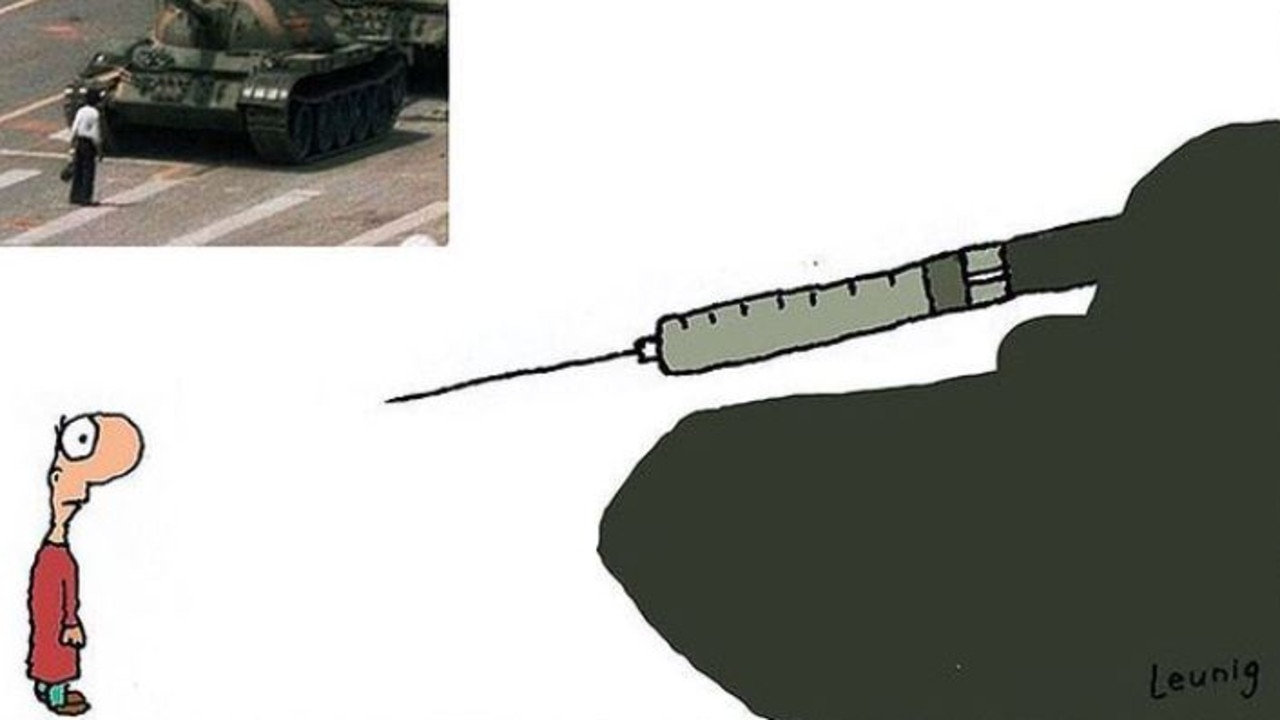 This is important, because ASIO is making the case that so-called “single issue violent extremists” are now a threat to Australia’s national security.

The head of the Australian Security and Intelligence Organisation says it is increasingly concerned about single-issue violent extremism, citing anti-lockdown protests in Melbourne as an example.

ASIO director-general Mike Burgess said many violent extremists were focusing on individual issues rather than broad ideologies such as right-wing extremism or white supremacy, which gave authorities less warning time.

“There has been considerable and understandable attention given to nationalist and racist violent extremism but we’re also seeing a growth in single-issue motivated groups and individuals that have the potential and motivation to embrace violence,” Mr Burgess told a Senate estimates hearing on Monday.

“We saw this, for example, in the recent anti-lockdown protests where some adopted violence as a tactic. ASIO has been concerned about this for some time and it’s one of the key reasons I changed the terminology we used to describe categories of violent extremism.

“The most likely attack in Australia will be that of a lone actor, one who mobilises to violence with little or no warning.”

This is nonsense, it is a waste of Australia’s intelligence assets’ time and resources and ultimately it puts Australia’s national security at risk due to this wild goose chase.

This is demonstrated by the fact that when there was no violence initiated by police, ordinary people were able to march peacefully through Melbourne streets to protest against tyranny.

This has also been repeatedly demonstrated by the peaceful protests throughout Australia in recent months as well as yesterday in other capital cities. Here are a couple of pictures of the massive rally in Perth yesterday: 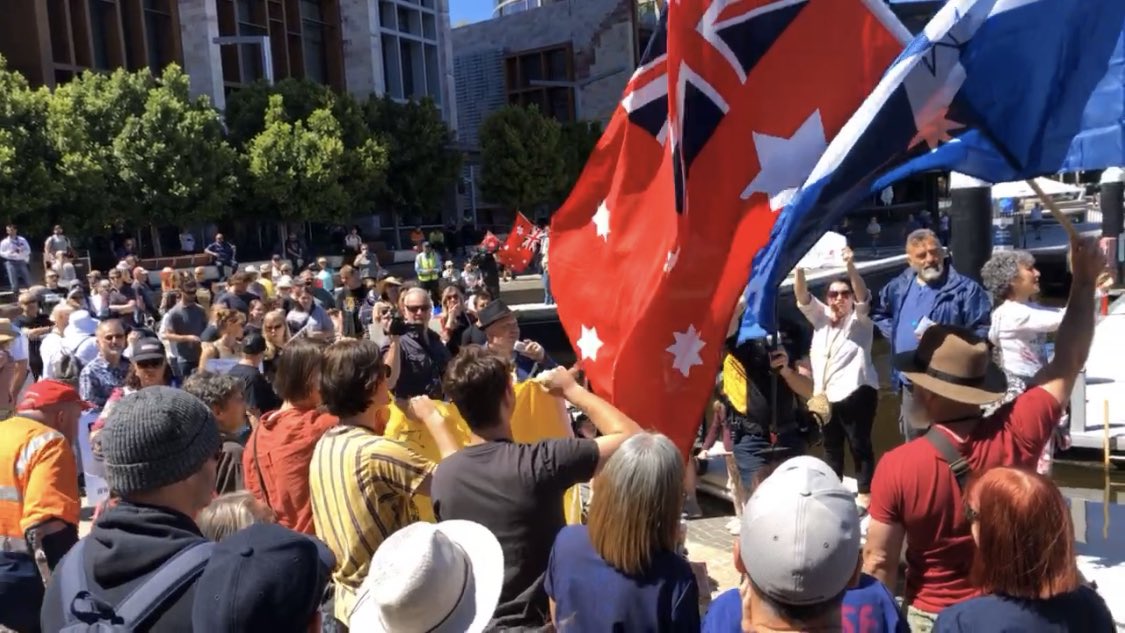 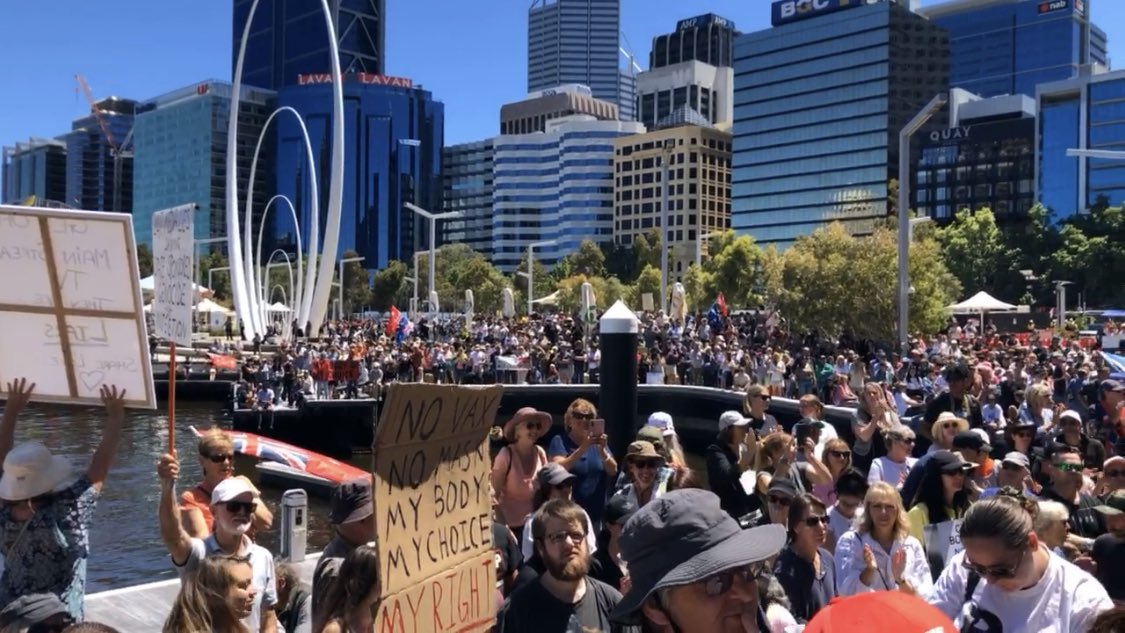 The only “single issue violent extremists” in the country are the puppet politicians forcing extremist Covid laws such as lockdowns, face coverings and mandatory vaccines, and the police enforcing this tyranny.

Hence the importance of that beautiful rendition of Advance Australia Fair. It rightly had a mournful tone to it. It mourned what we have lost, a country which no longer exists. Let’s listen again, while we can.