How long before Scott Morrison conveniently catches Covid and has to self isolate?

He’ll probably end up in a suite next to Justin Trudeau in a Davos Chateau.

The above footage was recorded yesterday outside the National Press Club in Canberra. The hundreds of people who protested there against vaccine mandates are only a fraction of the huge numbers already in Canberra or making their way to the nation’s capital.

So proud of all these people heading to Canberra! ❤️ pic.twitter.com/jbTETJlF7h

A massive protest against vaccine mandates and Covid Tyranny is planned there for this weekend, inspired by events in Ottawa, Canada where Justin Trudeau has been forced to flee for his life.

the revolution will not be televised

I don’t think @JustinTrudeau is quite as popular with free Canadians as he thought. #JustinTrudeau #OttawaConvoy #ConvoyForFreedom2022 pic.twitter.com/Ef9TrUAiGm

Revolution is gripping the West, with relentless, massive protests continuing in every European country which has not frantically lifted Covid restrictions.

France Prime Minister Jean Castex gets Mauled by The People…Soon they won’t be able to walk the streets…Keep it Peaceful but make their lives a living hell… Long Live the People pic.twitter.com/YrrbJFfe30

Farmers have had enough, protesting infront of the mayors office. pic.twitter.com/8hxspMACze

Naturally, globohomo rulers are trying to provoke a war with Russia in a last ditch attempt to distract the peasants. Many are hoping that once Putin liberates the Ukraine from its Colour Revolutionaries he will keep on rolling, just like in 1814.

Back to the “dog”, ScoMo. There are three takeaways from the incident.

Firstly, many of the people in that crowd would have been former Liberal Party voters, ie ordinary Australians. Those Howard Battlers in recent decades switched from Labor to Liberal as the Labor Party abandoned the White working class – who were the whole reason the party was founded in the first place – for a new constituency of imported and brainwashed voters, ie non-white immigrants and the university-educated public sector.

Ordinary Australians are now abandoning the Liberal Party, as it in turn has abandoned them in favour of an international NGO which wants to “transition” the West into a digital prison with no electricity:

Secondly, while they have reported extensively on the irrelevancies which Morrison waffled on about inside the National Press Club, you will not find this footage anywhere on the ABC. The taxpayer funded ABC is completely converged by Marxist groupthink and only ever criticises the Labor Party from the left, yet here it is missing an opportunity to point out that a Liberal Prime Minister has had to flee his own people.

This exposes the fact that the divide between left and right is a fake one. Our rulers pretend that democracy allows the people to elect leaders to represent our interests on our behalf. In reality they are rulers who pander to side issues in public while they walk in lockstep with each other on the policies which matter to them. 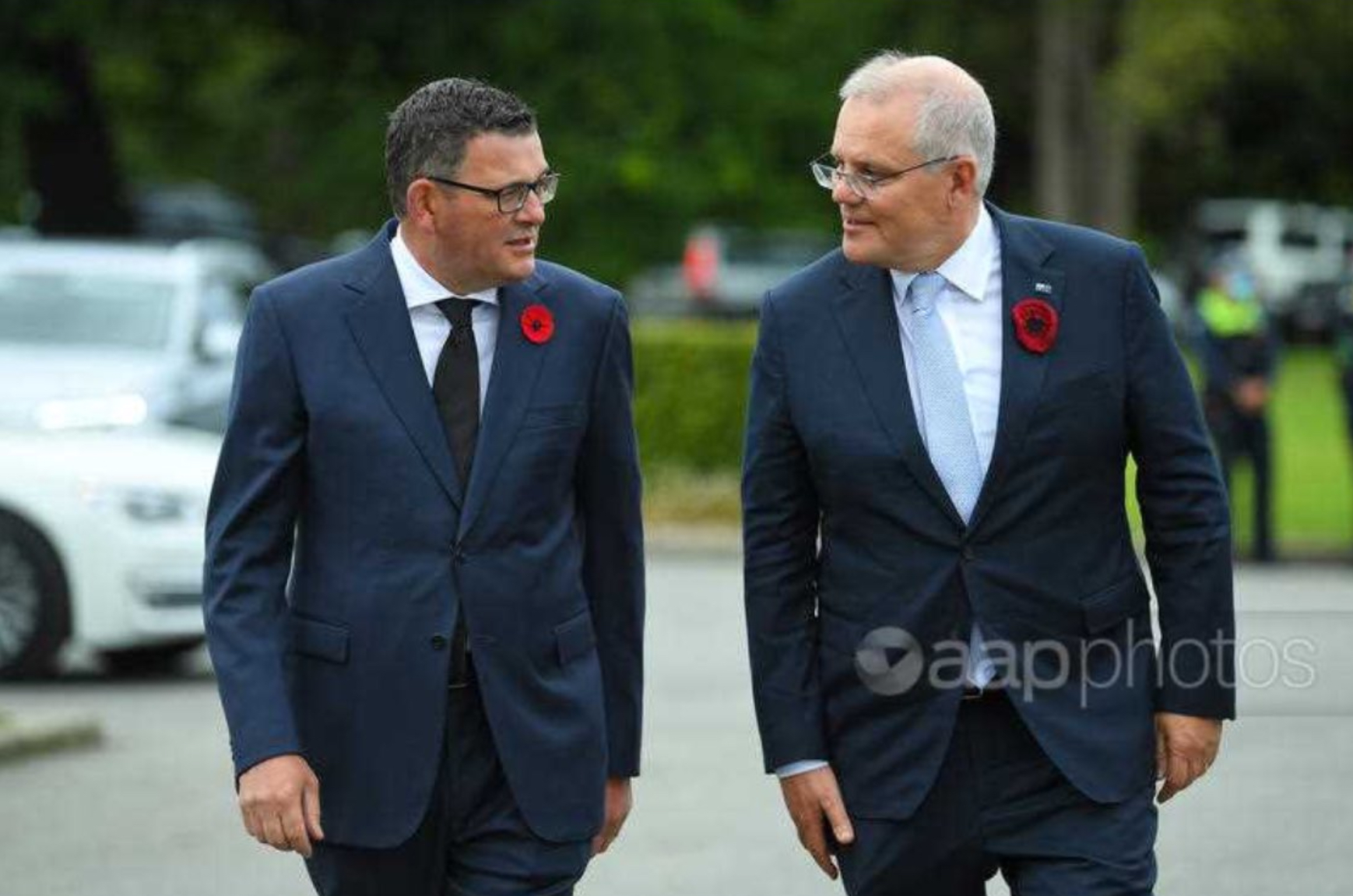 Pre-Covid, the policies which divided the rulers from the ruled were mass immigration and multiculturalism. Despite the fact that huge proportion of Australians objected very strongly to our replacement in our own countries, the rulers and their Lying Press lapdogs pretended that the majority of native White people were a fringe minority. Anybody who attempted to explicitly represent indigenous Anglo Australians was systematically expelled from the public sphere.

The point of mass immigration was to fracture Western nations to the point that when the globalists decided to launch the Covid plandemic and go for the kill, our society would be so divided that a coherent opposition would take several years to coalesce.

This leads into the last point – coalesce it has, and revolution is upon us. Many Australians now understand that there is no political solution. You cannot work in Australia unless you have taken the dangerous Covid vaccines. The elderly have died alone of heartbreak because their families are forbidden from visiting them, but their deaths are then cruelly listed as having resulted from Covid. Parents are being barred from visiting their sick kids in hospital. Children are being pressured into taking the vaccines if they want to go to school, and are encouraged to take the jab behind their parents’ backs.

Our rulers and the Lying Press point to their exaggerated figure of 90% vaccinated as proof that the majority of Australians support the vaccine mandates. However, this belies the fact that most vaccinated people did so to keep their jobs, and many of them fill the ranks of the massive marches against the mandates.

The vaccine mandate is now the number one issue which divides the rulers from the people. As it dawns on Australians that vaccines are forever and there is absolutely no mainstream representation of our views, a lot of people are starting to wonder what is really in them.

And they are headed to Canberra:

They are outside the National Press Club in Canberra and starting to sing to Scomo! pic.twitter.com/A9YFS6posN