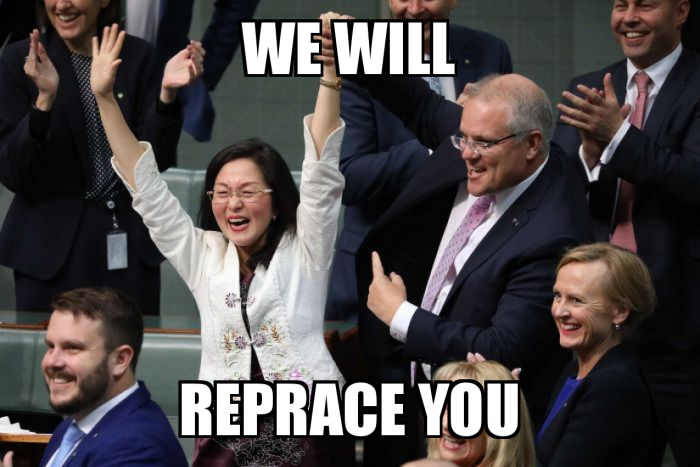 The plebiscite bill was defeated by 54 votes to 2.

The only two senators to support the bill were both independent of the two main political parties. The Liberal government senators, the supposedly conservative senators, all voted against the idea of even thinking of allowing the Australian people, what is left of them anyway, a say in the future of the racial makeup of their own country. So much for a supposedly hot topic at the last Australian election.

The Liberal party senators voted along party lines. In other words, they did what they were told. The assumption might be that the prime minister, the leader of the Liberal Party, made the decision to vote against the bill. But in reality the vast majority of these decisions are made behind the scenes by the Liberal Party president and his four vice presidents. As are the choices of who is pre-selected for plum senate spots on the Liberal Party ticket through the electoral college system.

Jobs for mates, in other words. Mates who will do what they are told. Perhaps even mates who can be forced to do what they are told through blackmail. Is it even remotely possible that an Epstein-style honeypot operation exists in Australia? The collective disbelief across all political positions in regards to the official story regarding Epstein’s death is a healthy development; the plebs aren’t believing the lies anymore. But the fact that whoever killed the man did so in such an open manner means that they were either highly desperate or that they simply do not care what the public thinks because the system is so far gone in their favor.

Likewise, a vote of 54 to 2 is highly indicative of our representatives simply not caring what we think on the subject of immigration. I mean, why not at least offer us the semblance of a say in the matter and then rig it so that we lose anyway? This outward expression of contempt for the rights of Australian citizens to be allowed by their own elected representatives to express their opinions is troubling. It signals that not only have we lost control of our country but our leaders do not care that we know their intentions. They are supremely confident in their arrogance. But then again, it has been over 20 years since they took away our guns.

Worshiping the gods of political correctness, in this case multiculturalism, is not enough of an explanation for their motivations to destroy the social fabric of the country through continued immigration. The economic realities add to the picture, as I have written about previously and there are no doubt many jobs for mates affected by that looming nightmare. The infiltration and subversion of the Australian political class on both sides by the Chinese government is another piece of the puzzle. Treason is a word that has been conveniently lost in the national vernacular now that foreign interference in our country is an openly routine matter.

Ties linking new Federal Liberal MP Gladys Liu to a secretive international influence arm of the Chinese Government have been uncovered by the ABC.

Ms Liu, who made history after becoming the first Chinese-Australian woman to gain a seat in the Lower House, was appointed honorary chairman of a Hong Kong-based organisation that experts say is affiliated with China’s efforts to exert influence on foreign governments and expatriate Chinese.

I wonder how that pre-selection process played out. Liu represents the seat of Chisholm in Victoria, known for its astounding number of indoor badminton courts. However, she only just got over the line, almost losing to the Labor candidate Jennifer Yang.

In 2014 Gladys Liu was made an honorary chairman of UCCAA — the United Chinese Commerce Association of Australia, which is described by its lawyer as a subsidiary of WTUF established in Melbourne by WTUF’s founder Baima Aose.

A spokesman for the WTUF told the ABC that the UCCAA is an “affiliate” of the WTUF’s “global partnership network” and has no legal or economic relationship with the WTUF.

At the same time as Ms Liu, Jennifer Yang was also appointed as an honorary chairman of the UCCAA.

Both women would later be preselected as candidates for Chisholm in the 2019 federal election — Liu for the Liberals, Yang for Labor.

Talk about hedging your bets.

Ms Yang told the ABC she did not recall being formally appointed an honorary chairman of UCCAA.

And now we are officially not allowed a say in our own replacement. Our “representatives” who we have elected speak entirely for other and often outside interests. Watch as more suburbs like Chisholm continue to be entirely lost to outside migrant groups with their own political agendas and loyalties. Australia leads the world in multiculturalism. It is not only a dubious distinction, it is a tragic one. We have imported our replacements and allowed them to govern us. We will not vote our way out of this mess.