On this day, November 11, we commemorate Remembrance Day. It is 103 years since the end of World War 1, a war in which 60,000 Australians died for a country which actually meant something to them.

Australia has long since been given away by our traitor politicians to globalists who consider the people who reside under this “jurisdiction” to be mere cattle. As such, Remembrance Day is simply another opportunity for our politicians to grandstand.

At the Remembrance Day commemorations in Melbourne today, Victorian Premier Daniel Andrews and Australian Prime Minister Scott Morrison were pictured getting on just fine despite months of public wrangling, a fact which did not go unnoticed: 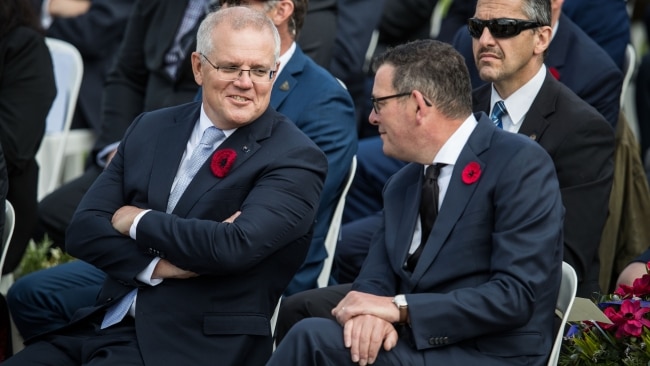 Prime Minister Scott Morrison and Victorian Premier Daniel Andrews have been pictured sitting side-by-side for a Remembrance Day service in Melbourne after months of clashing heads over the coronavirus pandemic.

Mr Morrison is in town as part of a week-long publicity trip ahead of the Federal Election, to be held sometime during the first half of 2022, and attended the ceremony at the Shrine of Remembrance on Thursday alongside Mr Andrews.

The pair, who are from opposing political parties, were snapped shaking hands, walking together and sitting next to each other on plastic chairs to honour the sacrifice of servicemen and women.

“We’ve seen hundreds of thousands of vaccines that should have come (to Victoria) going into Sydney.”

Some are saying that the pair were simply putting on a show of public unity. 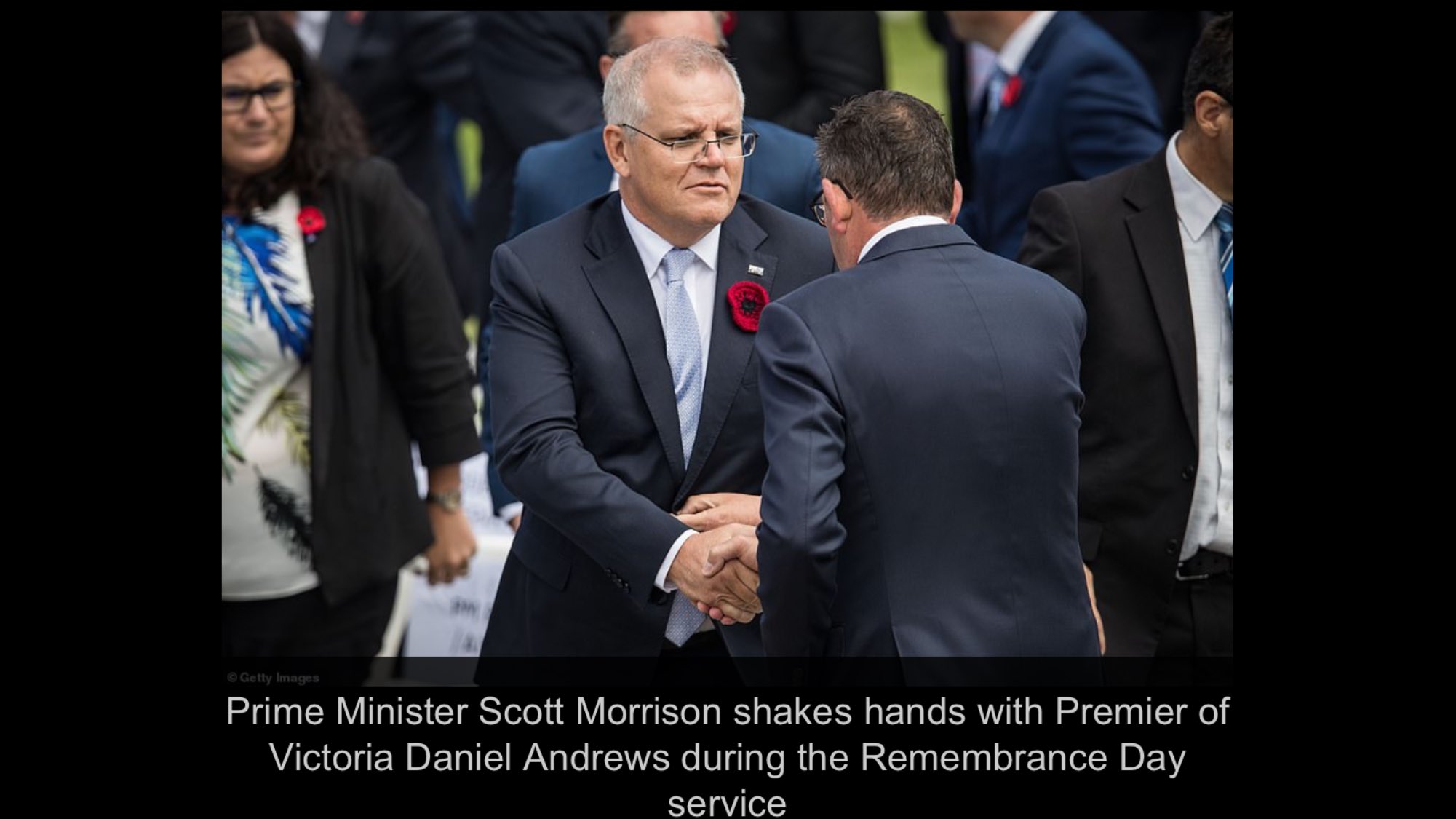 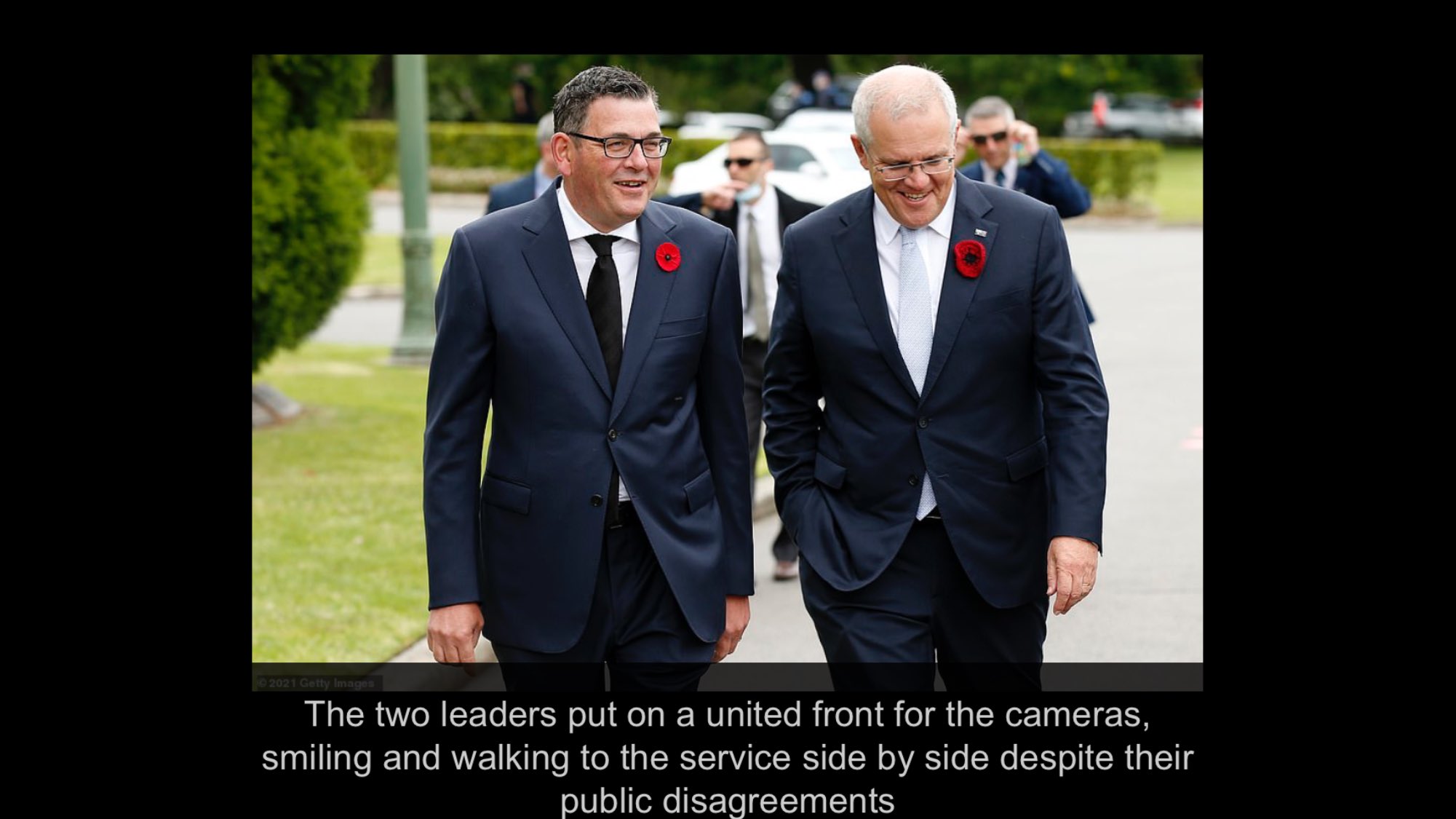 But you can’t fake this level of chumminess. 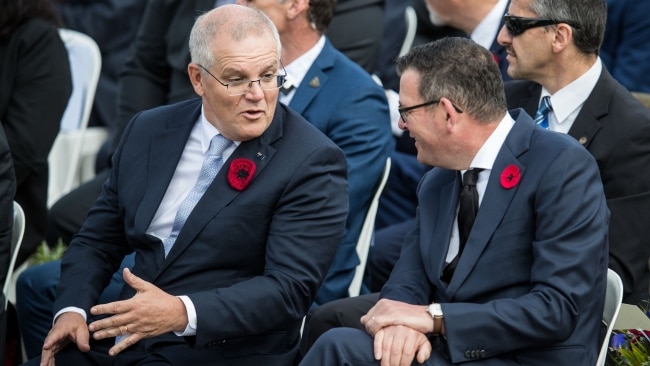 Their public civility with one another isn’t for show. Their public spats are the show. They give the impression of conflict, trifling over supply issues and the length of lockdowns. In reality they are in lockstep on implementing the lockdown and vaccine mandate policies which globalist institutions such aa the UN and the WEF, Big Pharma companies, and ultimately, the Rothschilds and the devil himself, tell them to do.

Scott Morrison signals to conservatives by saying we should not demonise the unvaccinated, and skilfully exploits anti-lockdown sentiment by stating that even though the Liberal Party has completely sold out its voters on “climate change” and stolen the Labor Party’s policy on electric cars, at least they’re not going to force anybody to do anything they don’t want.

Except, he stood by and allowed Daniel Andrews to brutalise Victorians for two years. He is the Prime Minister, yet he did nothing. He was all too happy for Andrews to look like the bad guy who helped him make the dangerous vaccine as mandatory as they could make it.

So I repeat, the friendliness for a day isn’t for show, the bickering is the show. It keeps ordinary Australians at each others’ throats while they get to keep screwing us.