Let’s welcome to the stage a young man by the name of “Will”, whom Daniel Andrews wheeled out for a press conference today to scare Victorians into getting vaccinated:

“I contracted COVID in March of last year, three days after returning home from America.

“I’d been studying at college in Boston. I’ve been battling long COVID ever since.”

He spoke without even a hint of an American accent.

Will was an athletic track star when he caught COVID before vaccines were available. Now, he says the effects long COVID has him struggling to walk around the block. pic.twitter.com/zglgG8uYM5

“The initial illness was incredibly frightening. The feeling of straining against your own body, trying to expand your lungs against this invisible force, struggling to breathe.

“But it was, in medical terms, a “mild” case. I wasn’t hospitalised. I was never in ICU. And I was officially cleared after a couple of weeks.

“And what a lot of people don’t realise is that even a mild case of COVID can turn into long COVID, which can severely impact your life there far longer than you would imagine.

“It can take many forms and, for me, that meant months after my diagnosis I still couldn’t walk around the block without getting lightheaded and needing to lie down, struggling to breathe.

“I was 23 and had just come off the back of four years of division one college athletics, training two times a day, six days a week.

“Now I had such debilitating fatigue that I sometimes couldn’t even get out of bed.

“These days, a relapse can be brought on by something as simple as walking the dog or going for a kick of the footy….

“COVID can still hit you and you don’t have to be on a ventilator to have your life turned upside-down for months, or maybe even years.”

Aside from the fact that he has clearly rehearsed this, down to the inflections in his voice and the hand gestures, his story sounds very similar to something from June 2020:

“It definitely shook me up a bit — it was very surreal,” said Von Miller, the Denver Broncos star linebacker who contracted the virus. “My biggest takeaway from this experience is that no matter how great of shape you are in physically, no matter what your age is, that you’re not immune from things like this.”

Miller, who has had asthma his whole life, said he was left shaken up by shortness of breath and coughing when he tried to sleep. He said he felt himself “fatiguing faster” when he tried working out again in his home gym, but that now he is training “full-on” again.

Experts warn that the virus does not discriminate. That was the lesson Andrew Boselli, an offensive lineman at Florida State, learned as members of his family — including his father, Tony, a former NFL lineman — began showing symptoms in March.

“I knew I was young and healthy,” said Andrew, 22, who returned home in Jacksonville, Florida, after the university closed its doors. “I play Division I football, and I’ve been training my butt off all winter and spring. I thought I had no worries; I wasn’t going to get it.”

Bingo. You got caught copying someone else’s homework, Dan. You changed Andrew to Will, 22 to 23 and football to athletics. It is of course possible that they are describing the same symptoms because long covid is real and it has the same symptoms for different people.

Or they could just be getting sloppy.

This comes just two days after Dan wheeled out an angry nurse to tell us that just before Covid victims are put on life support “they beg for the vaccine”. This story sounded suspiciously like a report from America several months ago. 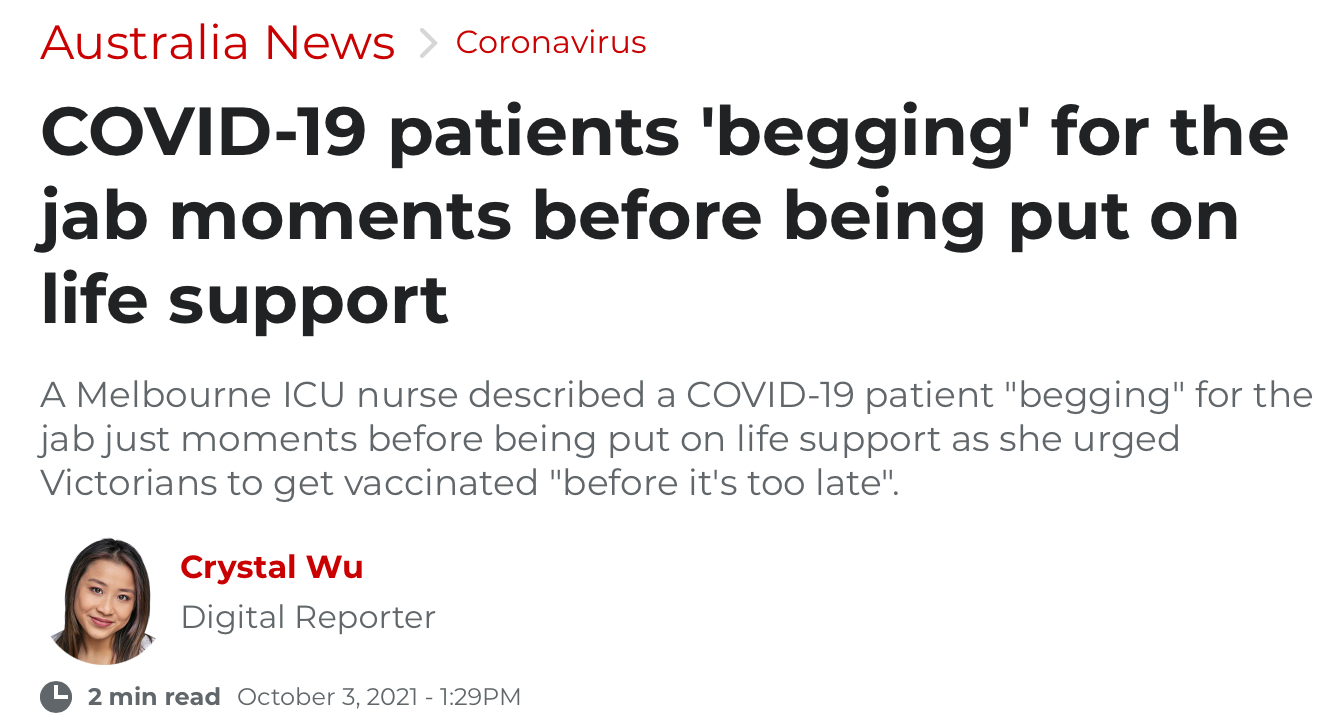 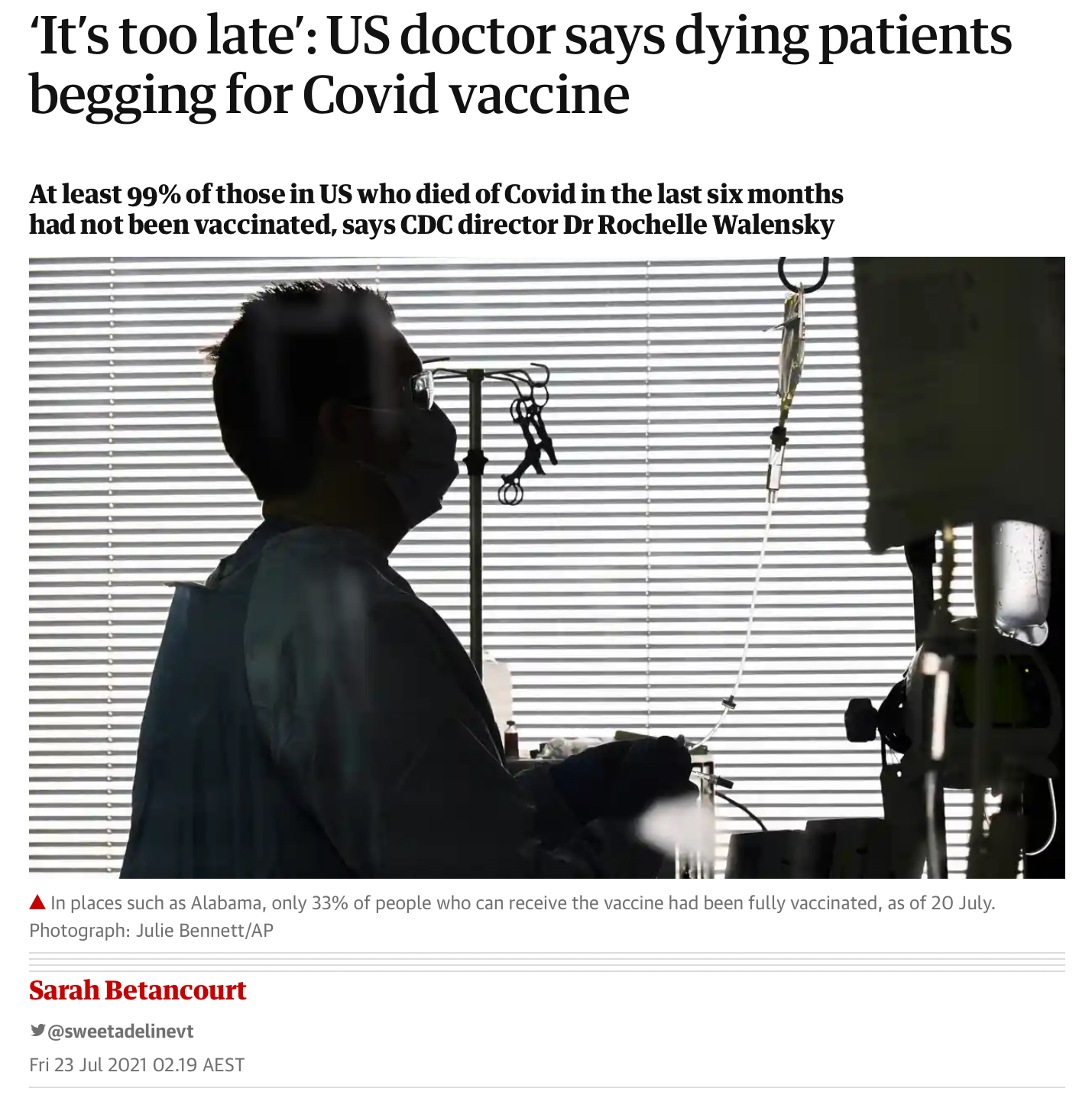 What this genuinely looks like is that the Victorian government is desperate to raise the vaccination rate. It is making the dangerous vaccines mandatory for “authorised workers” from October 15, and Victoria Police are very publicly bashing anyone who speaks out against this in public.

Wheeling out actors to tell scary stories which they cut and pasted from the internet and then altered slightly is a new level of derangement. They know the Lying Press are not going to pull them up on it, but everybody sees through it and they know it.

This leads me to suspect they are playing the old Soviet trick noted by Theodore Dalrymple:

“Political correctness is communist propaganda writ small. In my study of communist societies, I came to the conclusion that the purpose of communist propaganda was not to persuade or convince, not to inform, but to humiliate; and therefore, the less it corresponded to reality the better. When people are forced to remain silent when they are being told the most obvious lies, or even worse when they are forced to repeat the lies themselves, they lose once and for all their sense of probity. To assent to obvious lies is in some small way to become evil oneself. One’s standing to resist anything is thus eroded, and even destroyed. A society of emasculated liars is easy to control. I think if you examine political correctness, it has the same effect and is intended to.”