This video popped up on my feed this morning. It’s a short and punchy discourse by a Zoomer regarding the realities that he sees of his own generation. He is an American and living in Oklahoma. That’s important to note because what I’m seeing in mainland Europe is not mirroring the dysfunctional collapse that is happening in Anglo-Saxon nations. But first, watch the video.

First off is that this is an articulate young man, which juxtaposes with what he is sharing regarding the general apathy and disinterest of his generation with regards to any aspects of their history or culture. Which doesn’t mean that I don’t believe him; I believe every word that he says. This is a report from the front lines and you either believe those reports or you dismiss them, usually because they don’t fit into your own worldview of reality.

I have seen enough not to fall into that trap. If you’re in the house and you tell me that it’s on fire, then it’s on fire. I am pointing this out because I know that many people of different generations will easily dismiss what he has said here. It’s a terrible thing to not be believed when you’re crying out for some help, and this is a cry for help even though he presents it in such a calm and measured manner.

As he says, his generation barely received the ashes and embers of the generation that preceded them. The tearing down didn’t begin with the Zoomers. Rather, it began with the generation who gave birth to the Boomers. When I graduated high school in 1988 we were already in a bad place in a cultural and educational sense. School back then was reduced to rote learning of postmodernist ideas that had no bearing of any reality that I or my peers could understand. Worse than that was the complete disinterest of our teachers as regards to the well being of their students.

But on reflection, I will take apathetic disinterest over active propagandizing of leftist tropes any day. To be able to sit through twelve years of schooling of such brainwashing and perpetrated by the most horrendous SJWs that one could imagine, while at the same time having to defer to these evil creatures as people of authority in your own young life, and still come out at the end of that with an intact frontal cortex is an act of sheer survival of the fittest. If you’ve managed to throw off that sort of indoctrination then you sure as hell won’t succumb to clumsy and overwrought government attempts to stick a needle in your arm.

But how many of his generation are like him? Not many, I would wager. However, his is a message of hope as he concludes his short narrative with advice for the men and women of his own generation. And his advice is spot on. There is not much that I could add to it, and I don’t want to anyway as it is best to get out of their way and let them get on with resurrecting their communities from the ashes.

It is thus fitting that he endorses the traditional movement and a belief in God. He carefully asks Zoomers not to blame anyone, but I think that this is a false hope. Blame is coming, and it is coming in great quantities from those who will survive. It is right to forgive, but it is also right to ensure that such a calamity does not happen again. 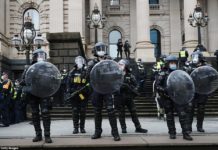