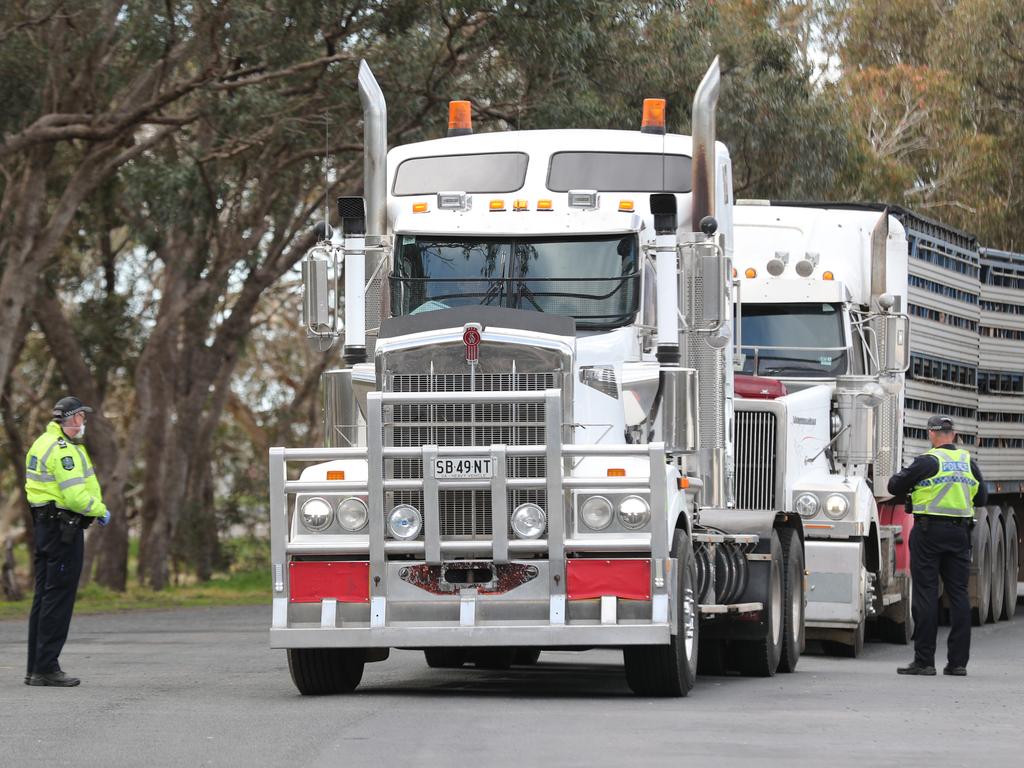 In a victory for people power, the South Australian government has backflipped on its mandate that interstate truck drivers must have had at least one Covid vaccine shot before entering the state.

Authorities have scrapped a plan to force truckies from high risk Covid areas to have at least one vaccine shot before entering South Australia.

The regulation, which was set to come into force on September 24, was designed to limit the spread of Covid-19 from truck drivers entering the state from Victoria, NSW or the ACT.

The trucking industry had raised serious concerns about the new rule, arguing it would lead to freight delays and labour shortages. Police last night issued an update to Covid regulations, stating truckies would not be required to have at least one jab to enter SA.

It comes as truckies have been stuck in large queues at the border, or sent back to Victoria after being caught out under a separate direction to have a Covid test within the previous 72 hours, if arriving from high-risk areas. Speaking before the backflip, Wendy Fennell, who runs forestry and logistics business Fennell Forestry, said the new requirements would lead to difficulties getting produce in and out of South Australia.

The Lying Press appears to have changed its tune from a few days ago, when it tried to frame the truckie strike around merely “working conditions” and “casualisation of the workforce”:

Why are they are on strike?

The drivers are members of the Transport Workers’ Union (TWU) and they are negotiating over their new enterprise bargaining agreement, which determines pay and conditions.

Toll is offering a 2 per cent pay rise for the next two years and a $1,000 sign-on bonus after the workers agreed to forgo a pay rise last year because of the coronavirus pandemic.

But the TWU, which is negotiating on behalf of the workers, is calling for a 3 per cent pay rise and job security.

Negotiations broke down because Toll wants to cut overtime for permanent staff and use short-term contractors and workers from labour hire firms on lower wages.

As The XYZ pointed out, the source of the “working conditions” dispute was the insane Covid restrictions and mandatory vaccination for crossing the Queensland border. It remains to be seen if the Queensland government will back down the way that the South Australian government has. It is also still unclear whether the promised truckie blockades across the country are happening or even happened.

What we can be sure of is that the threat of big blockades on August 31, the brief blockade on the Queensland border on August 30, the huge number of people who protested outside their local councils on August 31 and the stated aim of doing so in support of striking truckies, has resulted a tangible victory for the Australian people.

The South Australian government has backed down on mandating the jab for interstate truckies because truckies threatened to strike and people got out in the street to protest. This tells us that governments are wary of growing public anger and will back down if threatened with serious economic and political consequences.

Yesterday’s protests have taken a serious toll on people. There were mass arrests, mass fines, and completely unnecessary police brutality against people who were simply standing still in silence.

However, the lesson from this backdown from the SA government is that people power works. If people are prepared to endure a greater toll, freedom is attainable.