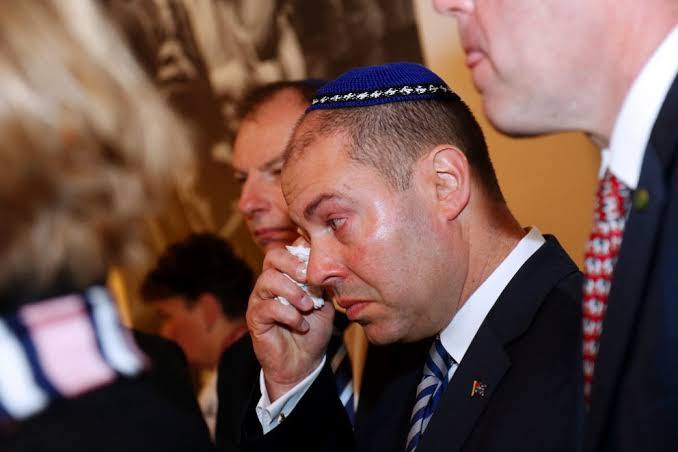 But that’s not why Australia became more racist. A lot of fuss is being made today about how he and other Diversity Liberals were ousted by the well-funded Teal “Independents”. However, this is far from the most significant shift in Australian politics signalled by yesterday’s result.

Yesterday evening, a group of nationalists openly defied the ban on the ancient symbol of the Aryan race, in front of the building in which Australia’s first parliament enacted the White Australia Policy. Doing so on Election Day highlighted the scam that is democracy and the betrayal of Australians by the political class. 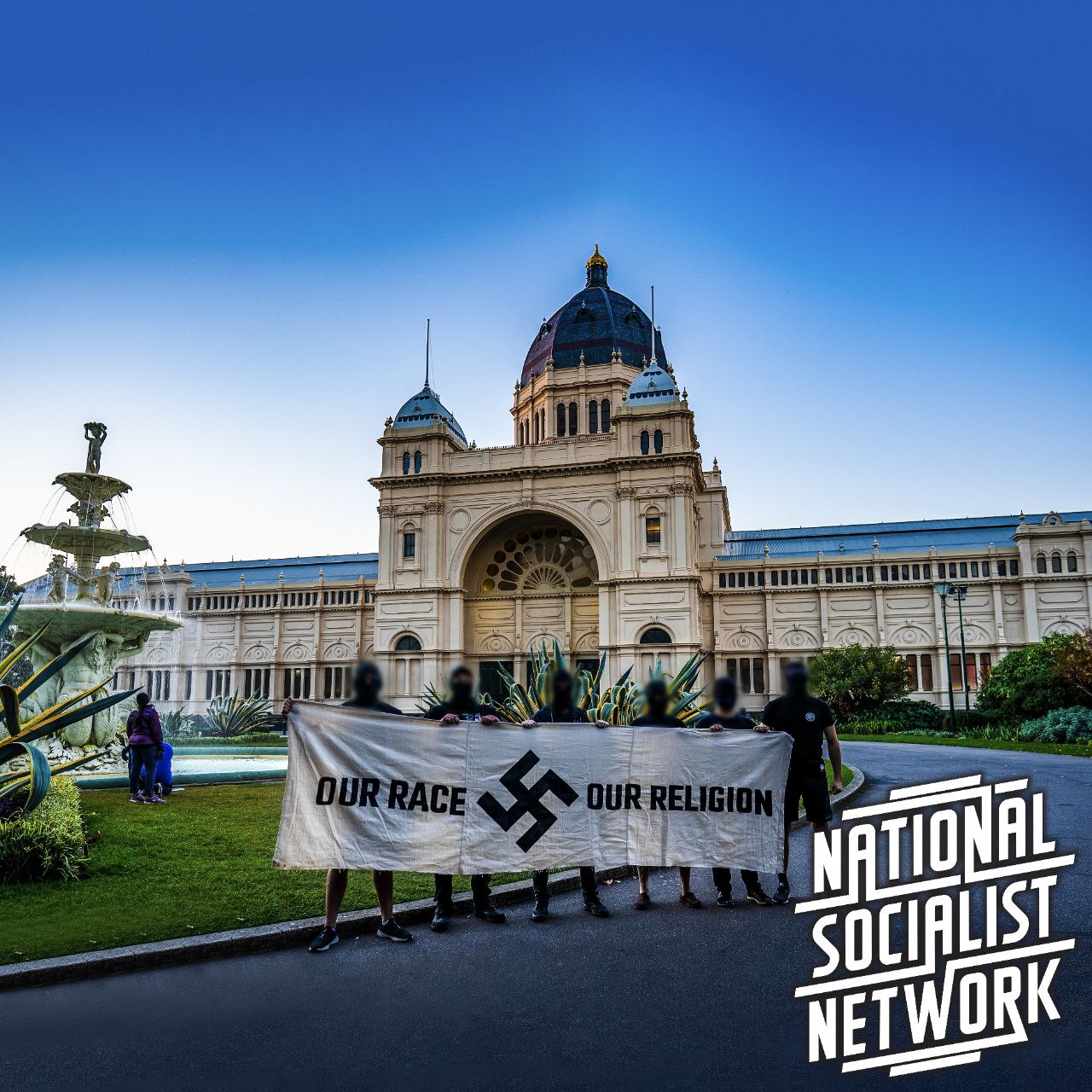 But that’s not why Australia became more racist. That’s not even slightly racist. What made Australia more racist were the results in the seats of Folwer and Chisholm.

First to Fowler. The most rabidly antiwhite politician in the country, Kristina Keneally, has been utterly trounced in what should have been a safe Labor seat, in an election which saw a huge swing to Labor. The reason she lost has triggered schadenfreude all across the country:

The issue of well-known white candidates being preselected over non-white locals became a running theme of the election campaign, threatening to spark a backlash against Labor in Sydney seats seen as crucial to its path to victory.

Keneally, a former NSW premier, faced an energetic contest from Fairfield deputy mayor Dai Le. The former Liberal state candidate capitalised on frustration at Keneally relocating to the area from the northern beaches, including among the electorate’s sizable Vietnamese-Australian community.

Labor suffered a thumping 18 per cent swing against it in Fowler, with Keneally trailing Le 46-54 on a two-party preferred basis…

Dai Le, who arrived in Australia as a refugee from Vietnam, said locals in Fowler felt “insulted” and taken for granted by Labor.

The outrageously antiwhite KKK was defeated by an explicitly antiwhite campaign against her. Her vanquisher won because she appealed directly to her fellow Vietnamese to vote against the White woman.

Take note that demographic change in Western countries is followed swiftly by demands by said foreign invaders for political power. This was the point of the BBC’s political hit-job.

Thus Kristina Keneally was defeated by her own antiwhite identity politics. This is the woman who has chaired the so-called “Inquiry into Extremist Movements and Radicalism in Australia” and who literally wants to ban “shitposting”.

A favourite toy of jewish power in Australia who travelled eagerly to Israel on the Rambam Program (yes, that’s actually what it’s called), she will discover very quickly that they can discard you just as quickly as they put you on a pedestal once they no longer have any use for you.

The nature of the result in Chisholm may appear at first to be a direct counterpoint to that of Fowler – victory to a White Labor candidate over a Chinese candidate in a majority “diverse” electorate – but the implications are remarkably similar:

Labor’s Carina Garland has convincingly won the ultra-marginal seat of Chisholm, which had been held by the Liberal Party’s Gladys Liu since 2019 on a razor-thin margin.

With two-thirds of the vote in the seat counted by 11pm on Saturday, Garland was in an unassailable position, with a swing towards Labor of more than 7 per cent….

Also out and about was a Kim Jong-Un impersonator, linked to Drew Pavlou, an anti-Chinese Communist Party Senate candidate for Queensland who has hounded Liu at several key moments in the final days of the campaign, including attempting to crash a media conference she did with Prime Minister Scott Morrison.

There are 109,000 eligible voters in the seat and an additional 19,000 adults living in the electorate who are ineligible to vote.

Around one in five voters in Chisholm have Chinese heritage.

That “one in five” stat is deceptive. ABS data demonstrates that the majority of people in Chisholm are foreigners: 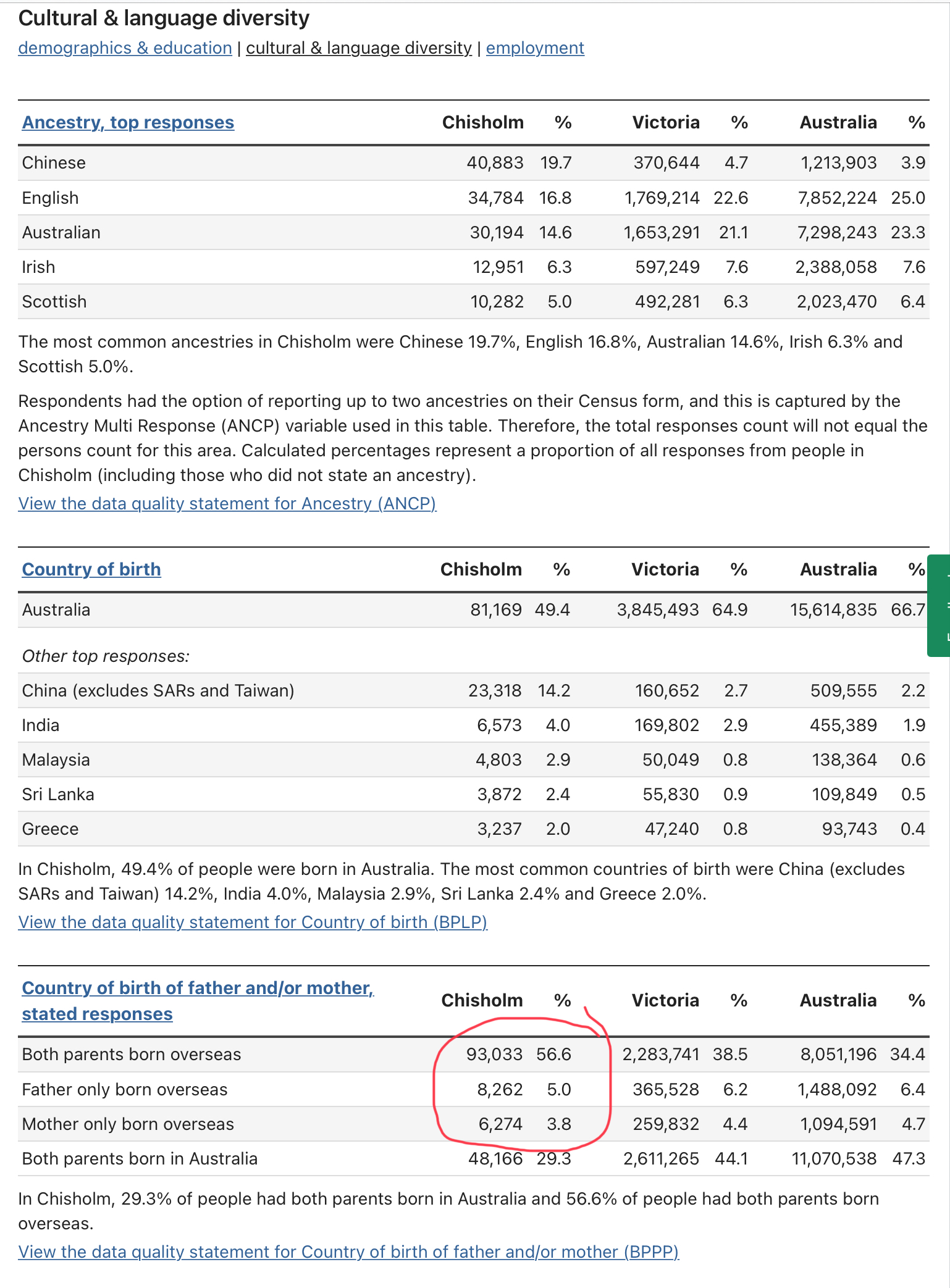 You only need to drive down Maroondah Highway through Box Hill, or visit the police station, to know what the dominant ethnicity is there. White people are being ethnically cleansed from the region.

Thus the Kim Jong-Un impersonator who crashed Morrison’s press conference with Liu this week was telling.

It’s hilarious because he’s the North Korean leader, not the Chinese one, but the implication was clear – a vote for the Liberal Party’s Gladys Liu was a vote for the CCP. Ironically at the 2019 election, both Liu and Labor’s Chinese candidate “Jennifer” Yang were linked to the CCP.

Thus Labor astutely ran a nominally “white” candidate in Chisholm this time around to avoid accusations of ties to the CCP.

However, her appeal was not to the White voters of Chisholm but the remaining 40% of Chisholm residents who are foreign, (non-Han Chinese and other South East Asians) who are concerned about the influence of the CCP through its Chinese candidate.

The Kim Jong-Un impersonator was a dog whistle, not to White voters but to other Asians. Thus the inter-ethnic rivalries of Asia were the deciding factor in the swing to Labor in Chisholm.

All politics is identity politics. Demographics is destiny. There is no such thing as multiculturalism, because the cultures that invade here all congregate in their own areas and vote in blocs. Australia now consists of micro-ethnostates comprising practically every race on the planet.

Political candidates are chosen to appeal directly to the ethnic interests of whatever demographic dominates their seat. As The Great Replacement of Anglo Australia accelerates, inter-ethnic rivalries will become more important in electoral outcomes.

White Australians have been trained to “not see race” but every other race that occupies Australia sees race explicitly, and bases its politics explicitly on its own ethnic interests. Diversity plus proximity equals conflict. Eventually, certain foreign demographics will feel alienated from the political process by other foreign demographics, and act accordingly.

At which point I will happily roast popcorn on the bonfire. 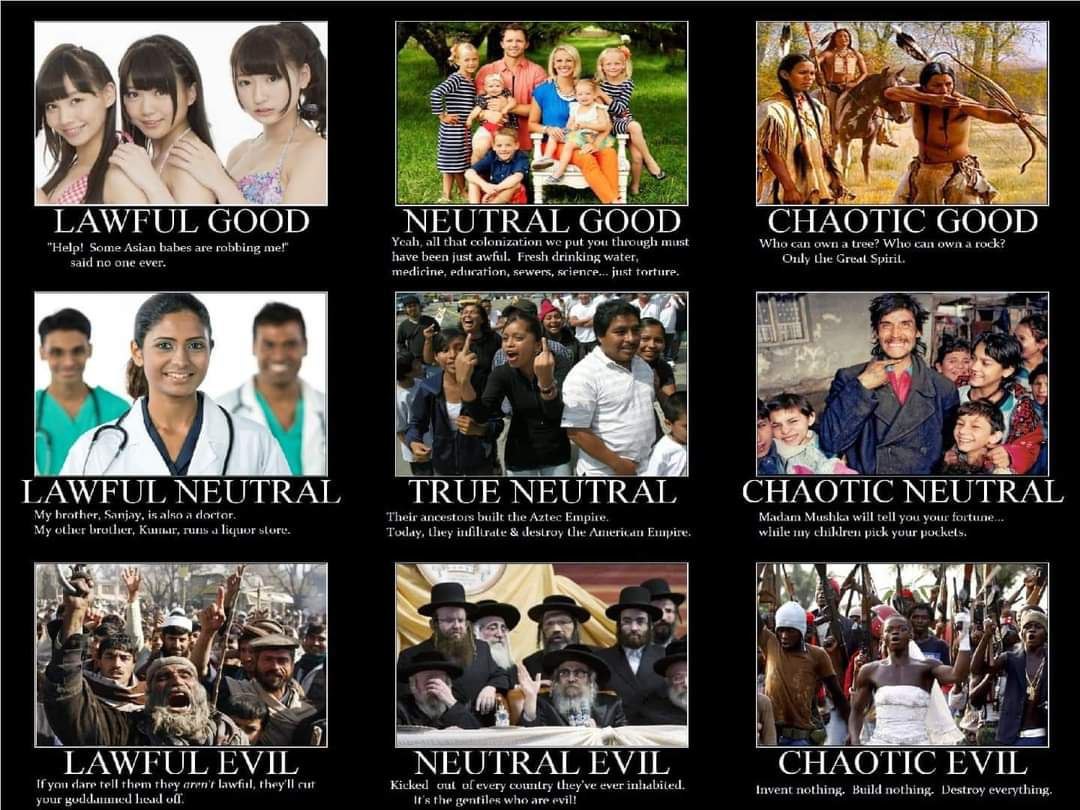