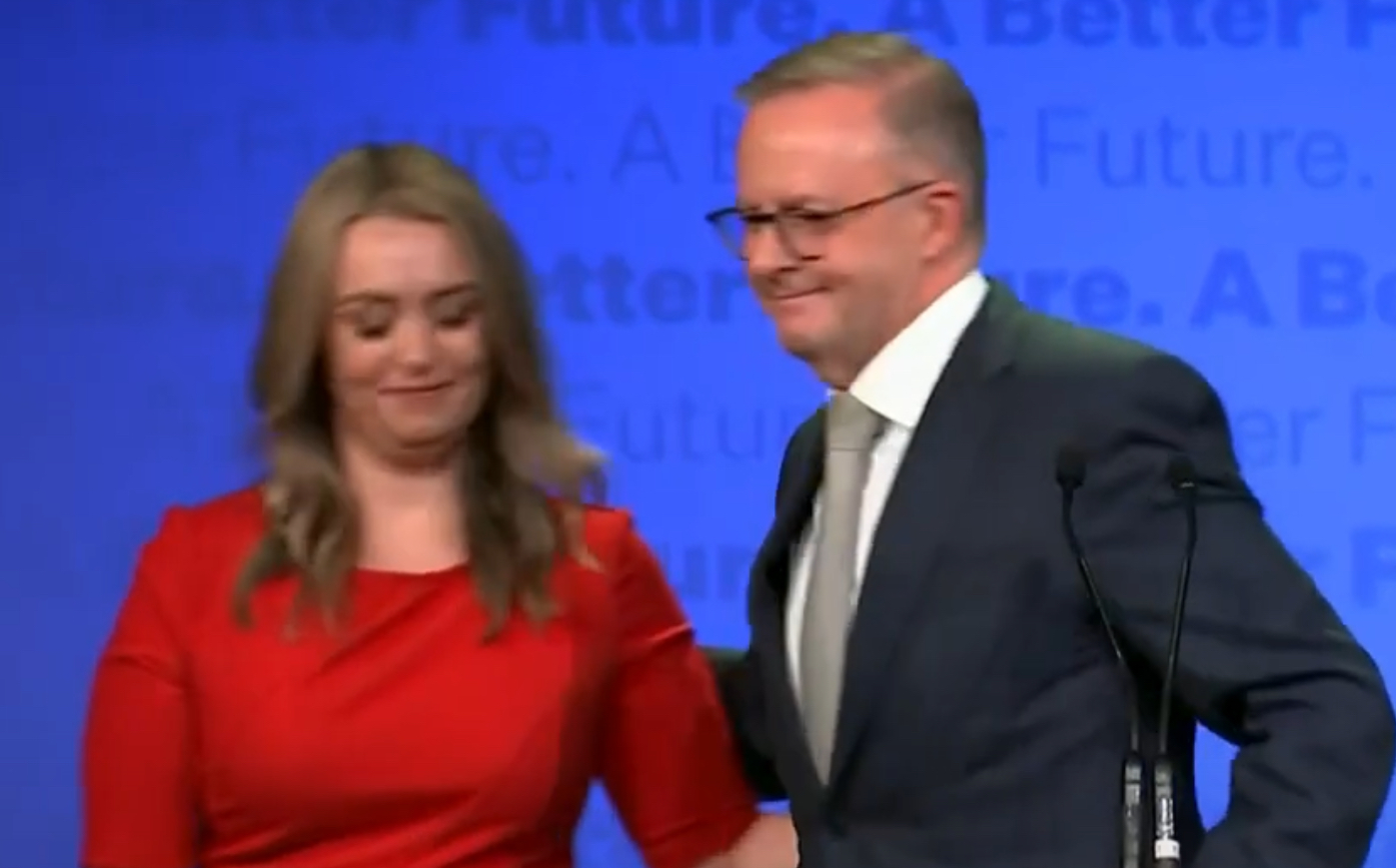 They cleverly chose a chick who wasn’t too hot, but still well above his punching weight.

Labor and Greens voters love Covid Tyranny and were thus unmoved, while the Liberal Party’s primary vote was frittered away amongst One Nation, UAP and “Others”. 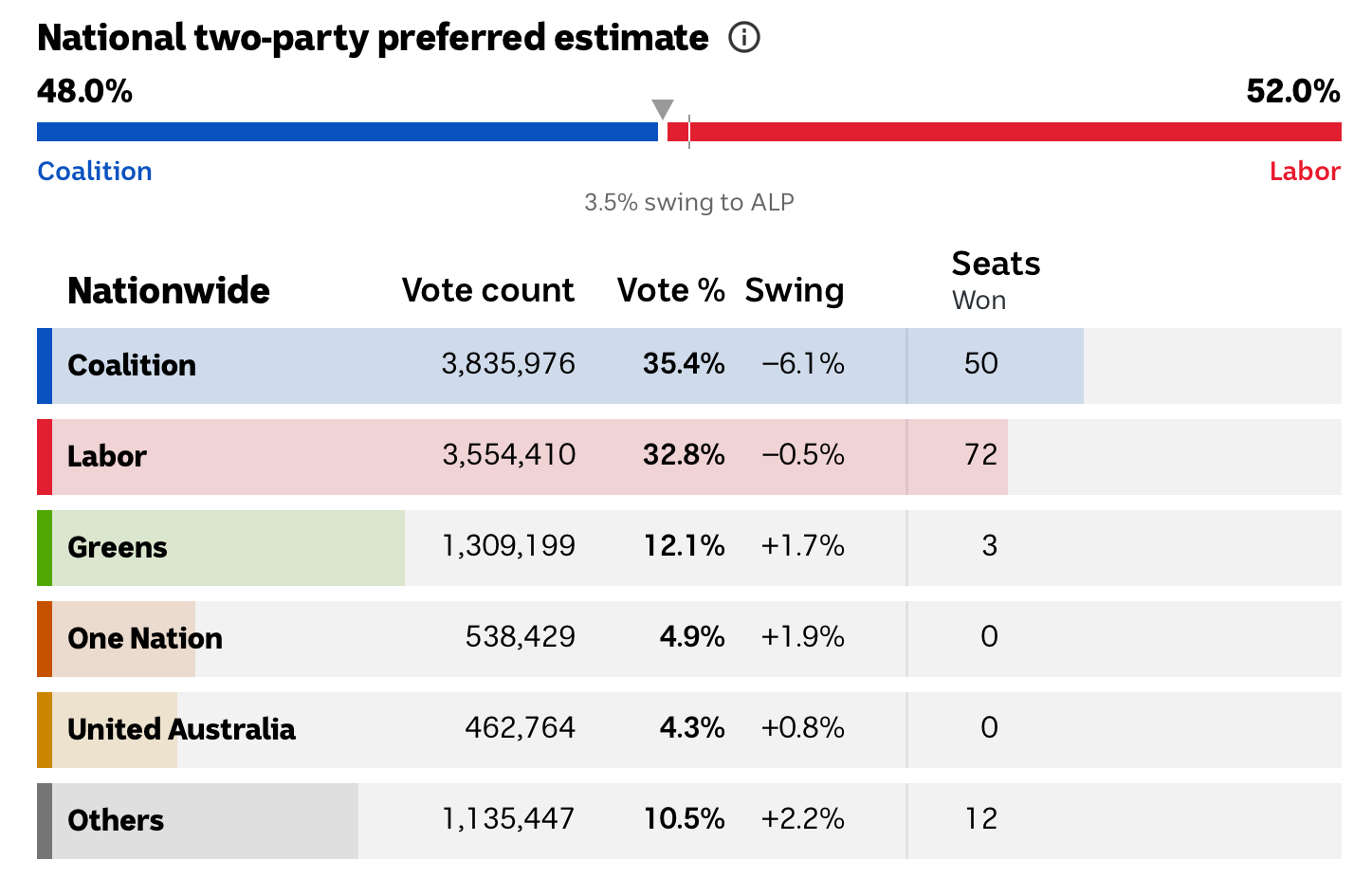 The division of voting blocs into thirds reflects the divided society Australian politicians have created, a trend which will likely accelerate as the centre collapses and Australia rushes to the extremes at both sides of the political spectrum. 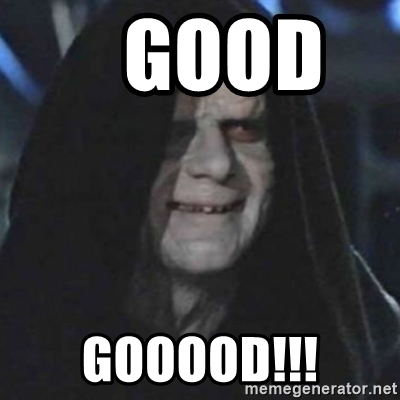 Australia now faces an all out assault on the family, fresh Covid Tyranny and waves of boat people.

Regarding the first factor, below is a video of AnAl’s victory speech. You can view the awkward peck he gave his fake girlfriend from about the 16:30 mark:

At least it was no Al Gore moment, but, well, urgh. 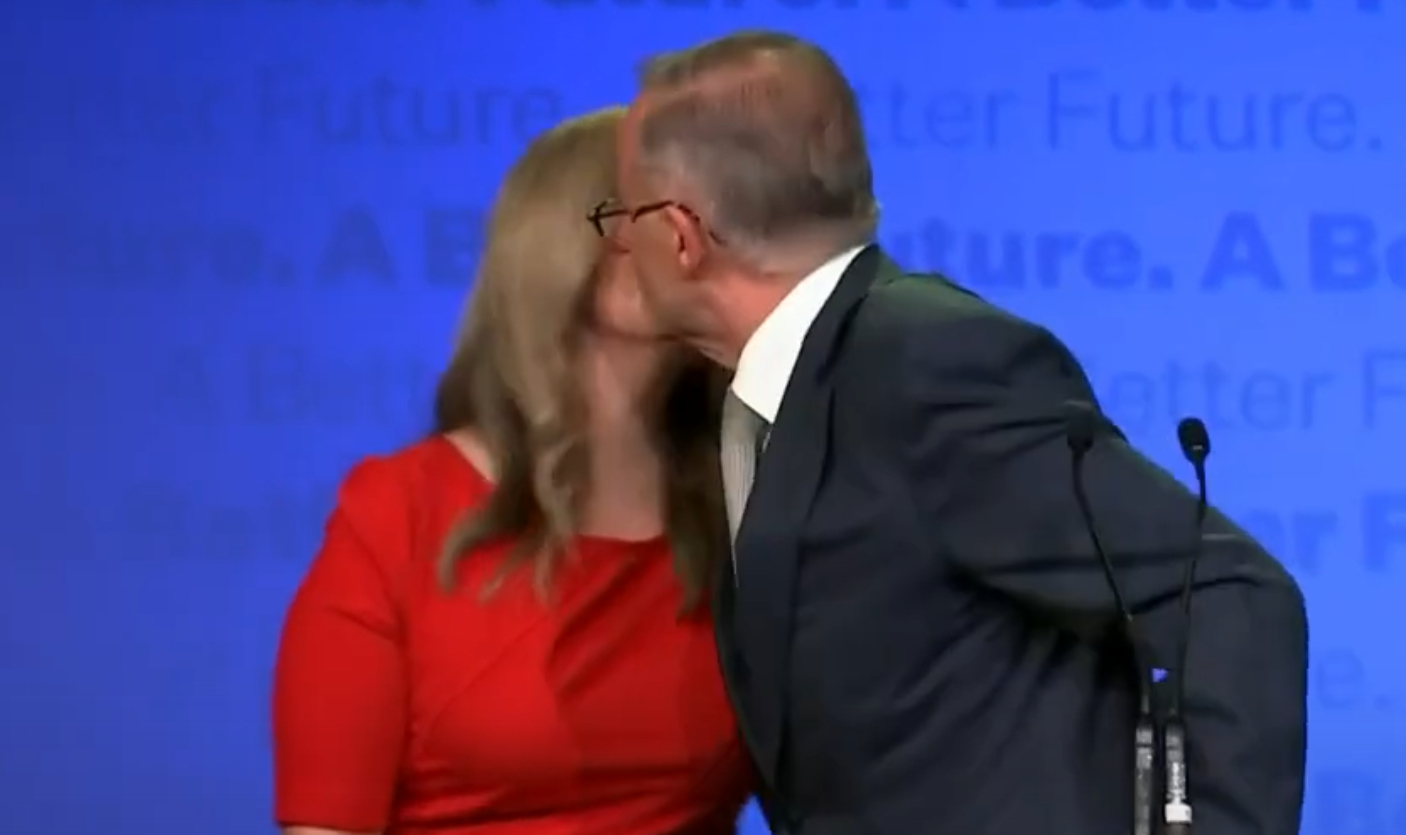 I wonder how much they’re paying her: 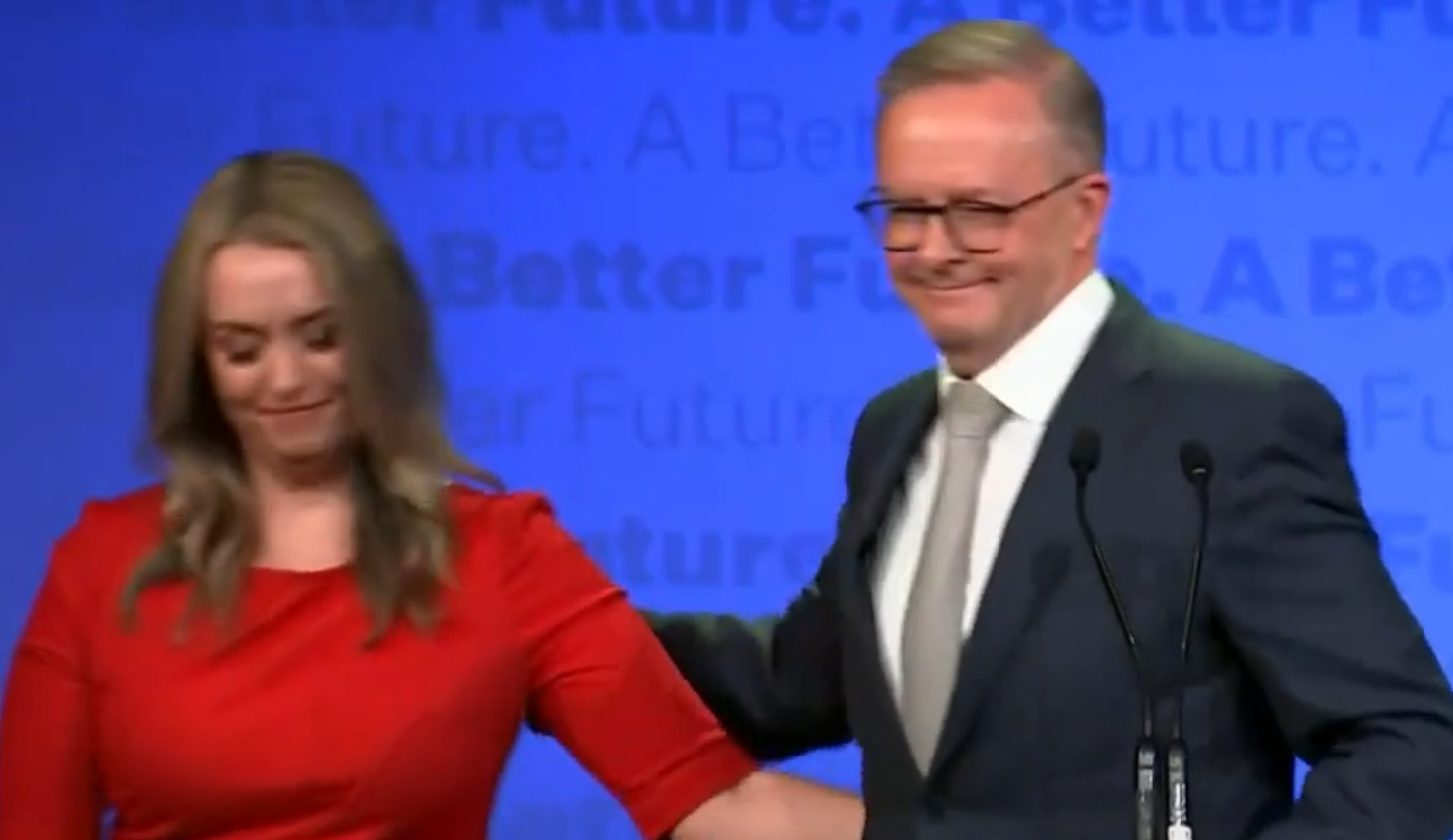 The “family” of Australia’s new PM says a lot about the kind of Australia the ALP purports to represents. At least the Liberal Party presents its Prime Ministers as leading strong nuclear families and keeps their Freemason-pedo tendencies as quiet as they can. Labor gave us the homosexual Julia Gillard and her beard (is that what we get to call the guy who made the joke about Chinese doctors checking our prostates with their little Chinese fingers?) and now the raised-by-a-single-mum homosexual AnAl with his fake girlfriend, standing on stage with a “son” who is clearly not his and thanking his former wife who had the good grace to attend his inauguration but stay off-camera.

They literally constructed a fake family for the homosexual for the purpose of winnang an election. This is a signal that they are really going to go after the family. Guard your kids, get them out of school, because they face an all out assault of reprobate propaganda.

Sri Lanka has gone off tap.

It’s just a small island off India. What happens when food riots hit the rest of Asia? Iran is using digital ID’s to ration food. Big Brother is here, and he’s watching us globally.

We’re looking at millions of culture enrichers coming our way, regardless of offshore processing. The people of the developing world are still under the illusion that Australia is a paradise, and if they are starving, what do they have to lose? 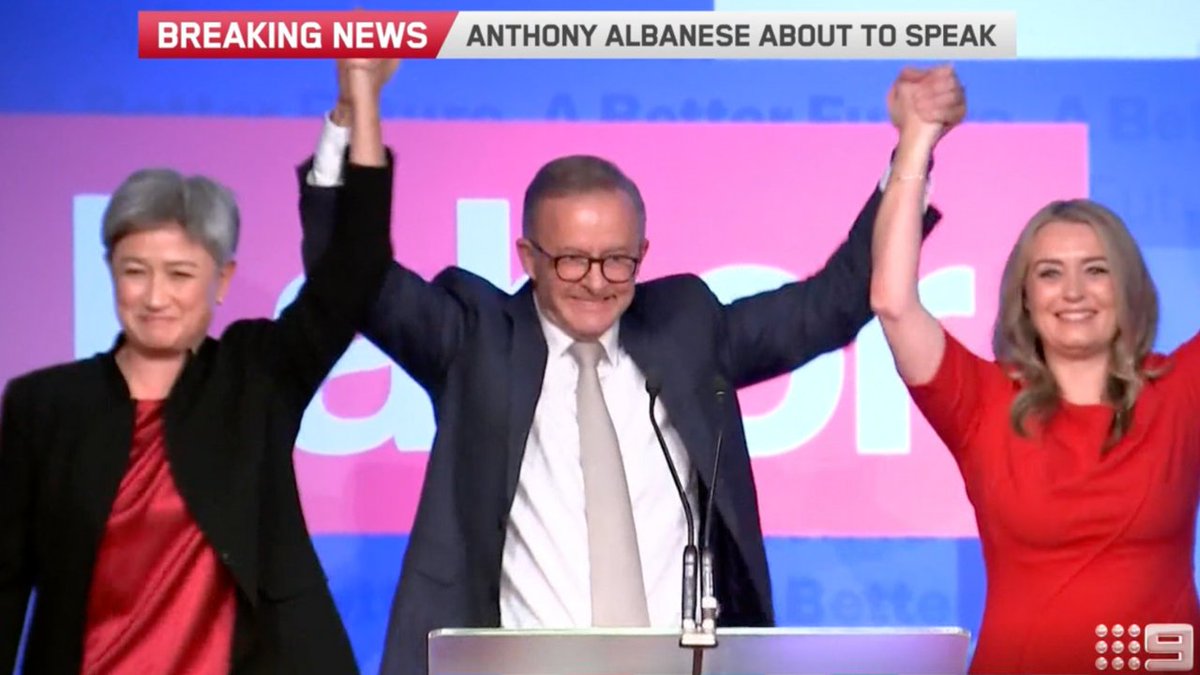