It has been a beautiful few days since Saturday’s federal election drinking the sweet tears of leftie anguish at the shock loss of the Labor Party. The Australian people have rejected hard socialism and climate change propaganda and have elected a government that at least claims to stand for economic freedom, Christian values and strong border protection.

Yet the same glaring problem which drove Fraser Anning to prominence over the last 9 months still exists and is only going to get worse as the endless slow retreat of the Liberal Party cements the social and cultural wins of the left.

Exhibit A is “The Battle for Chisolm”.

The problem I am referring to is an existential one; we are being replaced. The Battle of Chisholm is the Surrender of Chisholm. The division of Chisholm is situated in Melbourne’s leafy eastern suburbs, is middle class and has one of the highest concentrations of Chinese people in Australia. Downtown Box Hil is even on its first steps to looking like downtown Singapore.

Naturally, both major parties have run female Chinese candidates. This has led to a funny article in the ABC whose headline appeared to give a little too much away: 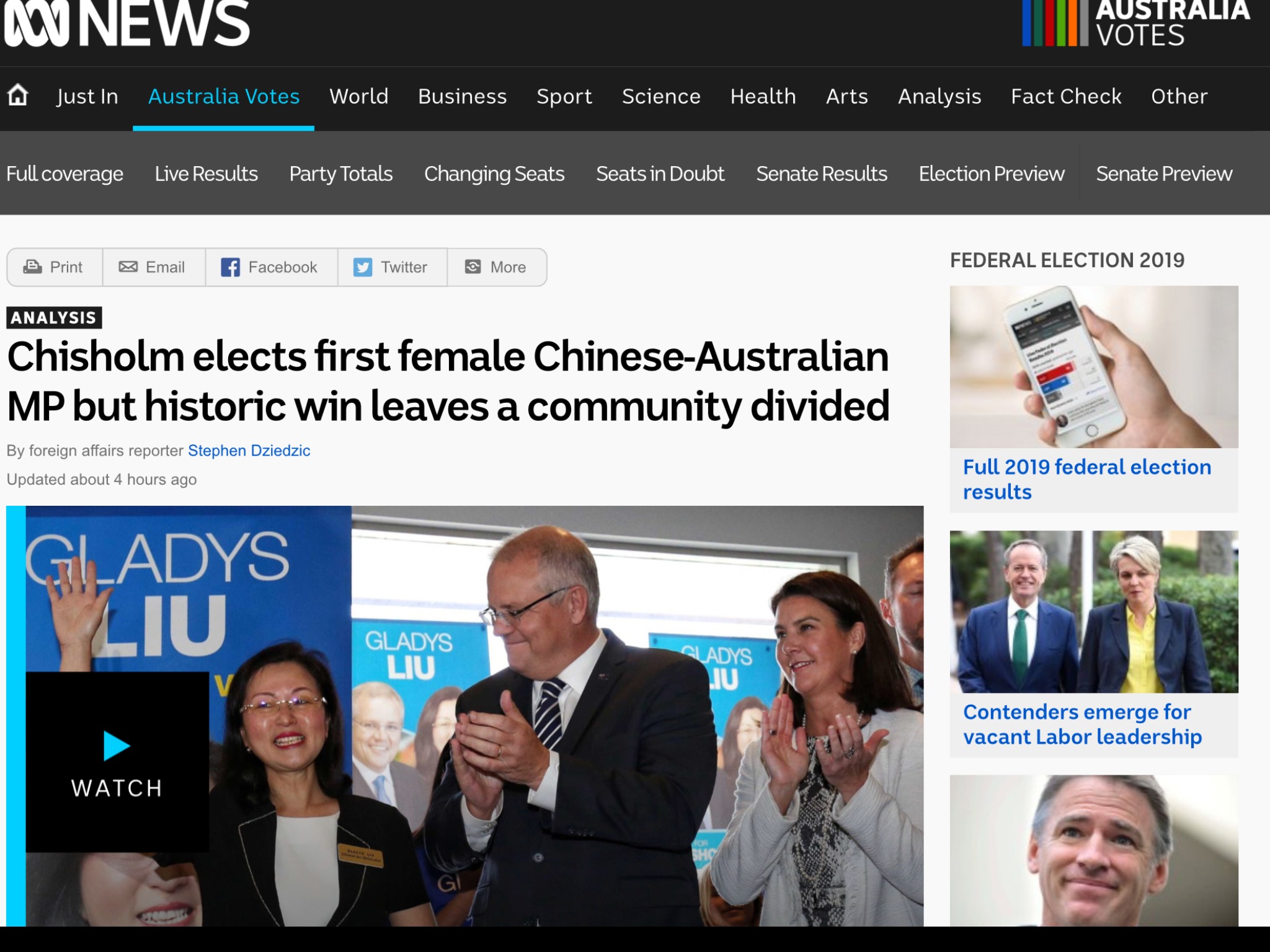 The division however refers not to the growing resentment by BBQ Australians at their replacement with Apartment Australians, but to stupid he-said-she-said factors that nobody cares about:

First the Prime Minister had to defend his candidate after Ms Liu found herself in hot water over comments she made about same sex marriage in 2016.

Then she became enmeshed in a series of bewildering minor scandals, including an abusive online post about Jennifer Yang written by Ms Liu’s sister, and confusion over whether Ms Liu was still a multicultural ambassador for the AFL.

Analysts mused about how the foreign interference debate or the Coalition’s hawkish stance towards Beijing might sway the outcome, but those who knocked on doors in Chisholm say most Chinese-Australians were firmly focussed on issues closer to home.

A recording of comments made by the Liberal candidate for the Victorian seat of Chisholm appearing to describe LGBTI issues as “rubbish” emerges.

Both Labor and the Coalition also took to Chinese social media sites like WeChat to woo voters, with heavyweights from both major parties spruiking their agenda.

But WeChat was also a petri dish for fake news and misinformation.

Some users accused Labor of planning to introduce a massive inheritance tax, while another circulated doctored tweets from “Bill Shorten” declaring that Labor would boost migration from the Middle East.

Labor accused the Coalition of orchestrating a “desperate scare campaign” and wrote to WeChat’s parent company two weeks before election day to complain. But in private they admitted there was little they could do.

Aside from the fact that Labor’s proposed family reunion policy would indeed have led to millions of new migrants flooding Australia in the next few years, largely at the hands of these very same Chinese people who were concerned about Middle Eastern immigration, we now get to the heart of the matter.

It is no consolation that an Asian female soft-socialist Liberal Party candidate beat out an Asian female candidate for the hard-socialist Labor Party, when Chisholm itself has been swamped by Asians. There is no point whatsoever in saving Australia from mass Middle Eastern migration nor the Islamisation that would bring, if we are just going to replace Australians with Asians instead.

This is why we have to talk about race.

It does not matter if Asians supposedly have high IQ’s and are less likely to commit crime. If real Australians were replaced with literal angels from heaven it would still be wrong, because ethnic replacement is wrong.

We gave Box Hill away because we white Australians acquiesced to the argument that race doesn’t matter. But race clearly does matter, because both major parties ran Asian candidates in Chisholm. If race didn’t matter, neither major party would have bothered running an Asian. Political allegiance does not naturally run along class lines but racial lines. Given that both major parties have made this clear by their actions, it is inevitable that a party which explicitly advocates for the interests of heritage Australians will grow as more and more white people rediscover their racial consciousness.