EDITOR: The following is a submission made by XYZ author Jack Blackthorn to the Inquiry into Extremist Movements and Radicalism in Australia. It was made before the submission due date and we were at pains not to publish it before public hearings at the Inquiry commenced, so as to avoid disqualification from being accepted as a publicly available submission.

However, through a series of emails, which we will share in the post script, seemingly dimwitted staffers deliberately misinterpreted Blackthorn’s intentions so as to avoid accepting it as a public submission.

I wish to make this submission to the Parliamentary Joint Committee on Intelligence and Security which is currently conducting an inquiry into extremist movements and radicalism in Australia.

I am an aged care worker, farmer, charity worker and advocate for human rights. I wish to remain anonymous to protect myself from political persecution.

Regarding section 1(a) of the terms of reference being considered by the Committee, it is my informed opinion that the individuals who are falsely labelled ‘extreme far right-wing extremists’ are mostly normal Australian patriots, much like our founding fathers, who reject the recent Government’s undemocratic policies implemented to replace and erase European Australians.

White erasure is often expressed but not limited to the Government’s never ending ‘Multicultural’ and ‘Diversity’ policies that require constant nonwhite immigration and assimilation until white people are all gone.

White people make up just 8% of the world’s population so if you flood all white majority countries with non-whites and assimilate us with ‘Multicultural’ and ‘Diversity’ policies, you eliminate white children forever. There will still be a billion Africans in Africa, a billion Indians in India and two billion Asians in Asia.

Australian peoples of white European heritage have been subjected to nonviolent genocide for the past 40 years. Nonviolent genocide is a slow process of immigration and assimilation against the will of the majority, but the antiwhites in the current Government appear to be accelerating this process into a violent genocide ‘coincidentally’ in all white majority countries at the same time.

The United Nations Genocide Convention 1948 makes it very clear that any attempt to ‘harm or destroy’ a group ‘in whole or in part’, violently or nonviolently is Genocide and will be punished as such. Flooding white majority countries with non-whites and assimilating us with ‘Multicultural’ and ‘Diversity’ policies is white genocide.

For the current Government to continue the white genocide process as Australians start to push back, it is apparently necessary for the Government to speed up this process into a violent genocide to remove opposition. For this to happen the Government is required to enter into the 10 Stages of (violent) Genocide. The 4th stage is ‘Dehumanisation’ of your victim group. Labelling white people who object to our genocide as ‘extreme far right-wing extremists’ is exactly that ‘Dehumanisation’.

With regards to section 1(b) it is obvious that most Australians that are ‘Dehumanised’ as ‘extreme far right-wing extremists’ are not at all interested in violence. We just want the Government’s white genocide policies to stop, and for the publicly funded Australian Broadcasting Corporation (ABC) to let the diverse opinions of Australians be broadcast so the public can make informed decisions on how to proceed.

Our opinions are in line with those of our founding fathers who created the Australian Federation to protect Australians from white erasure and exploitation from cheap, foreign, nonwhite immigration. If our voices are censored and misrepresented by the Government and the ABC then we don’t have a democracy at all. We have a government/ media dictatorship.

Terrorism is only an effective political strategy when the mainstream media is sympathetic with the perpetrators and can attribute attacks to another group, down-play them or up-play them to a specific target to amplify the fear and create their desired reaction.

State-sponsored terrorism and genocide is mostly outside the scope of this enquiry but it must be added that most genocides in the world are committed by the government of the respective countries in close conjunction with radio/ television broadcasters and government-sponsored militia groups.

Islamists have learnt that terrorism is mostly counterproductive because the Globalist mainstream media is not sympathetic and will use Islamic terrorist activity to activate new wars against their homelands. Interestingly, past governments in Australia and overseas have used Islamic and other terrorism to introduce draconian laws against the government’s biggest enemy, the patriotic citizens of those countries.

For this reason we must be very sceptical any time a so called ‘extreme far right-wing extremist’ commits an act of violence. We know the antiwhite establishment will use this to activate further stages of genocide against White Australians; ie stage 5. Organisation, 6. Polarisation, 7. Preparation, 8. Persecution, 9. Extermination, 10. Denial.

So who benefits from terrorism? The antiwhite establishment benefits.

As the antiwhite establishment continues to censor, ban, slander and vilify patriotic Australians, it is conceivable that suicidal individuals who are victims of ‘Multicultural’ violence/ job replacement and are unable to express themselves while their people are replaced and erased could lash out in a cry for help. Suicide prevention services must become educated on the process and trauma of white erasure. There is always hope.

Regarding section 2. and 3. of the terms of reference, you know you have a problem and are on the wrong side of history when the current Australian Government’s greatest enemy is patriotic Australians.

It will be expensive and difficult for security agencies to recruit ‘Australians’ who are not patriotic. For this reason these agencies will have to recruit antiwhites and nonwhites, descending these institutions into lawless, secretive, violent and thuggish entities as the next Frankenstein’s Monster is born where entrapment tactics will be used the way they are in the United States of America.

Australia has big challenges ahead with regards to the rise of China and India as the United States Of America rots from within. This is not the time to turn on and attack the majority white patriots of Australia who are the only people trustworthy and capable of defending Australia in times of war.

It is conceivable that the antiwhite establishment, under the banner of Antifa or Black Lives Matter, will recruit or entrap nonwhite and aboriginal Australians into committing acts of violence against patriotic and random white Australians to encourage a response from patriotic Australians who are being targeted.

It must be noted that Aboriginals make up just 3.3% of Australia’s population, so if the Government floods their communities with other groups and assimilates them with ‘Multicultural’ and ‘Diversity’ policies then Aboriginals will go extinct for ever in just a few generations. Australian patriots are totally opposed to government-sponsored genocide of any group.

We believe that all peoples have the right to exist and preserve their race and culture and no one has the right to harm, exploit or genocide any other group. 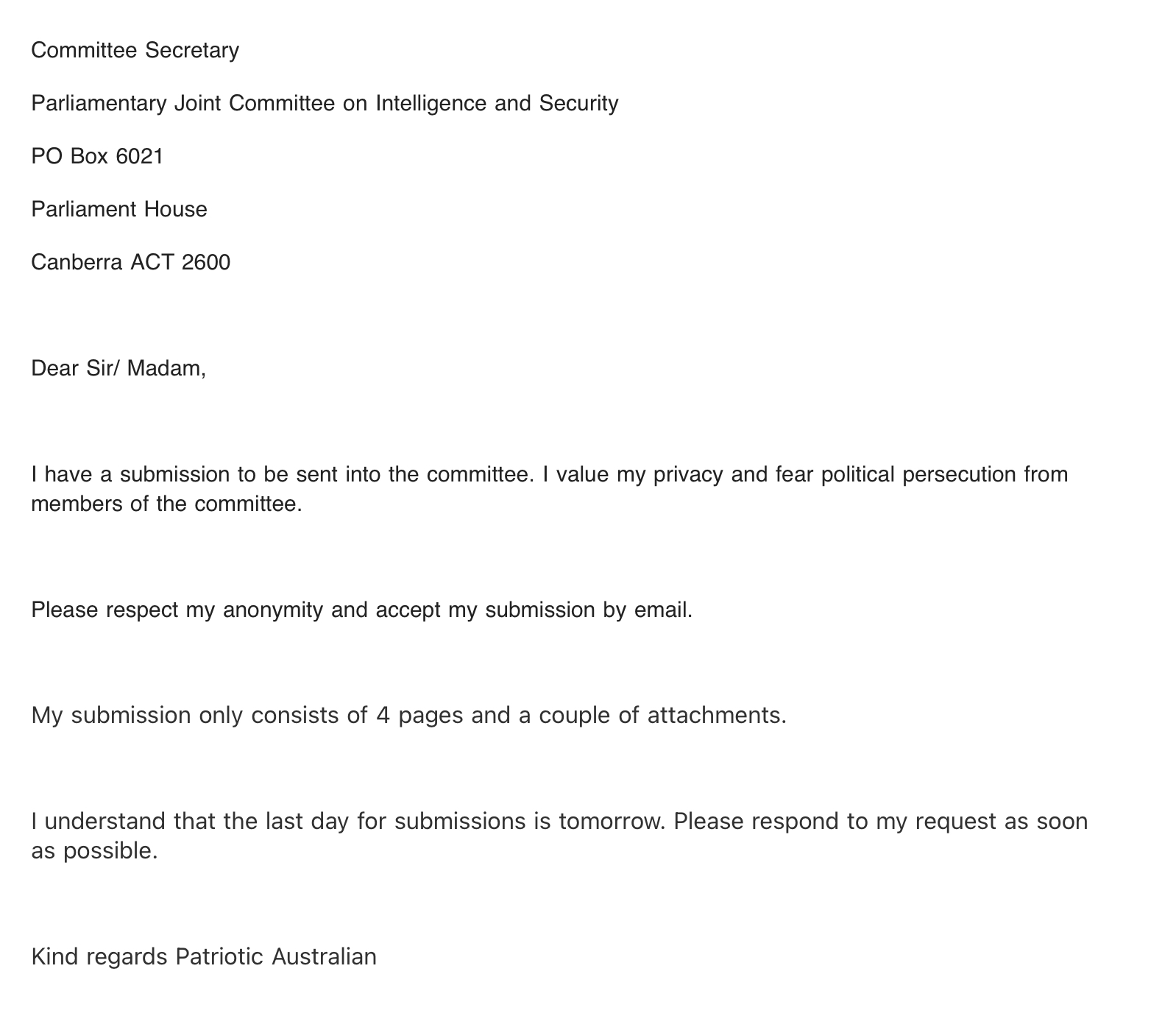 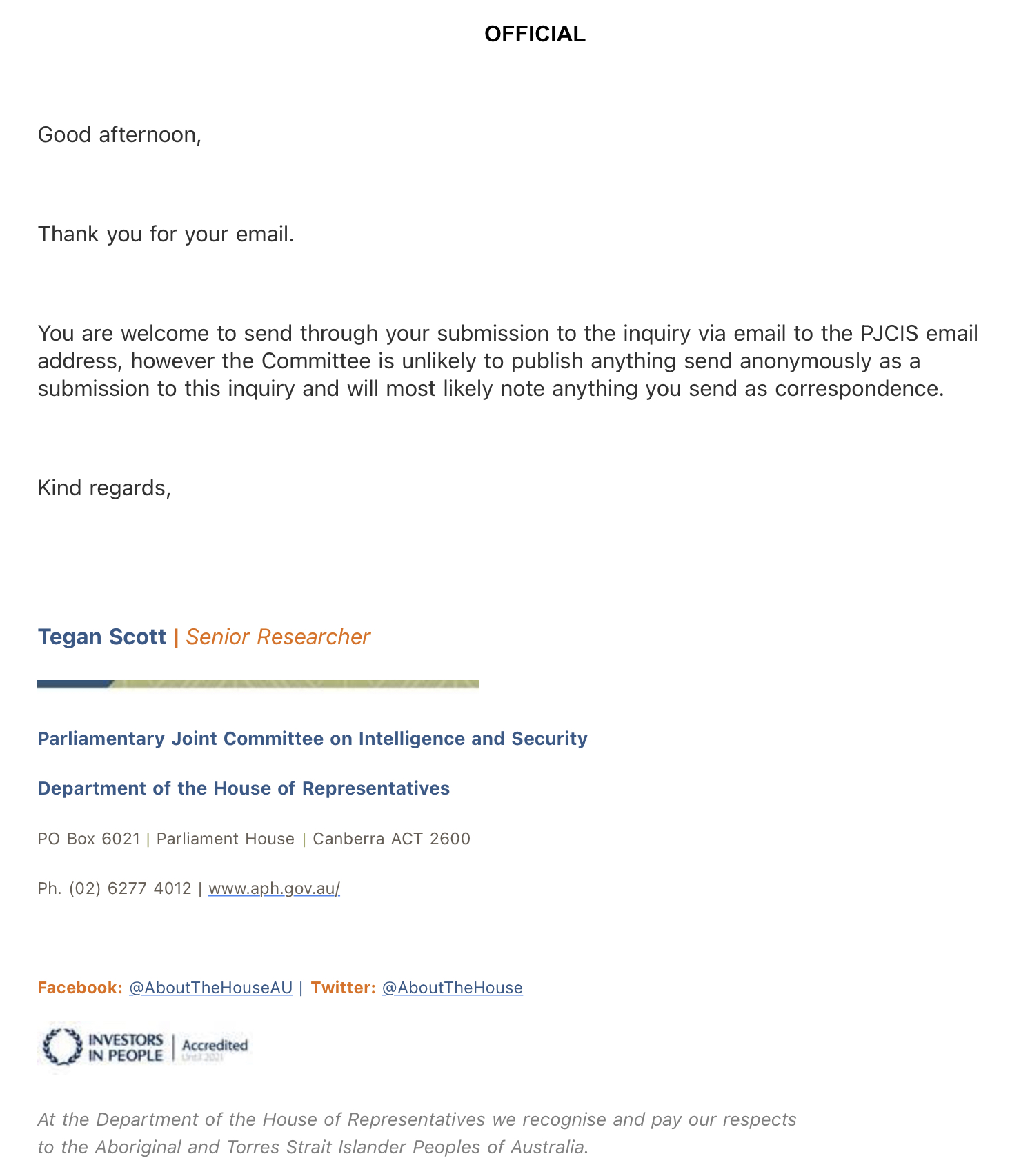 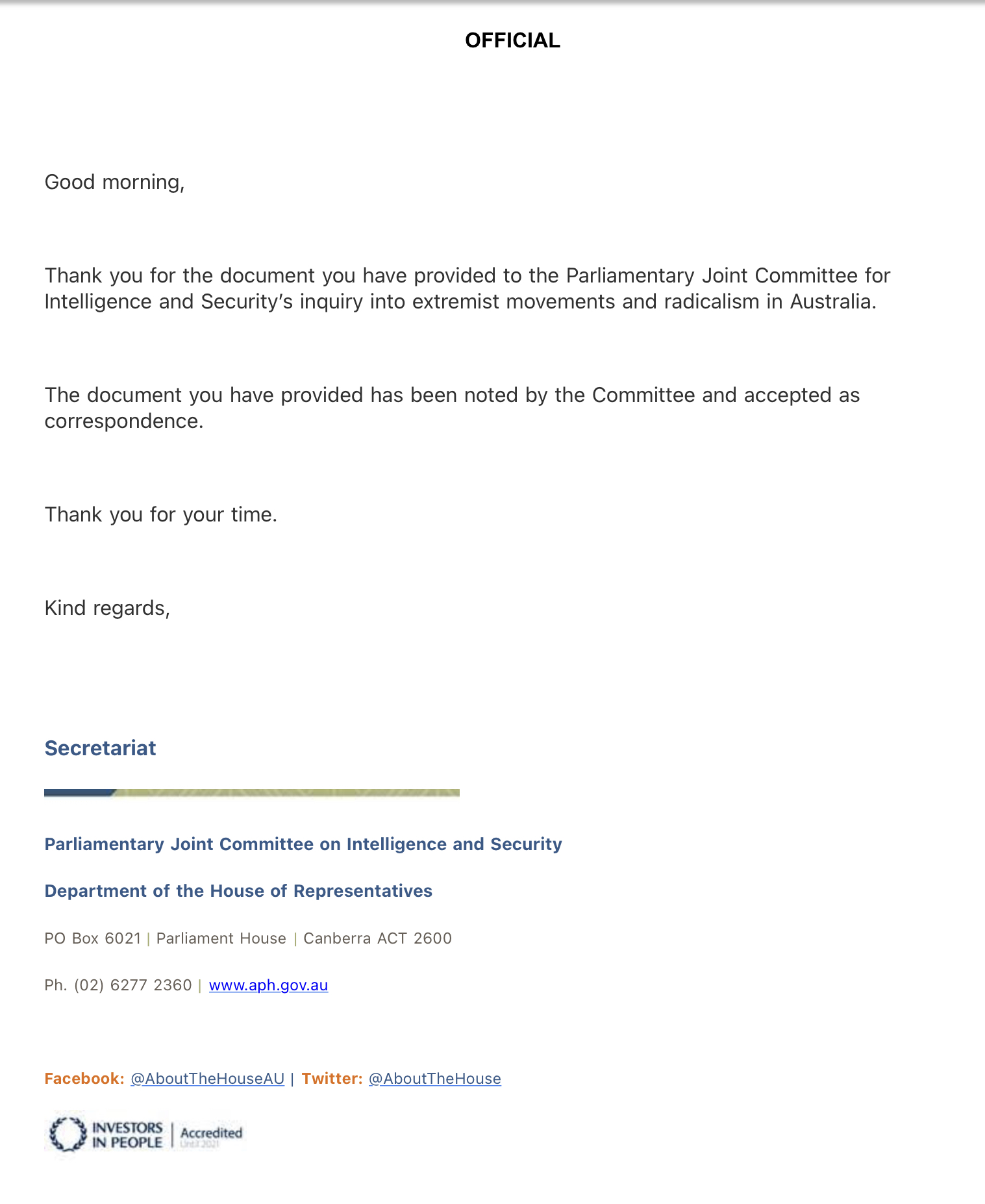 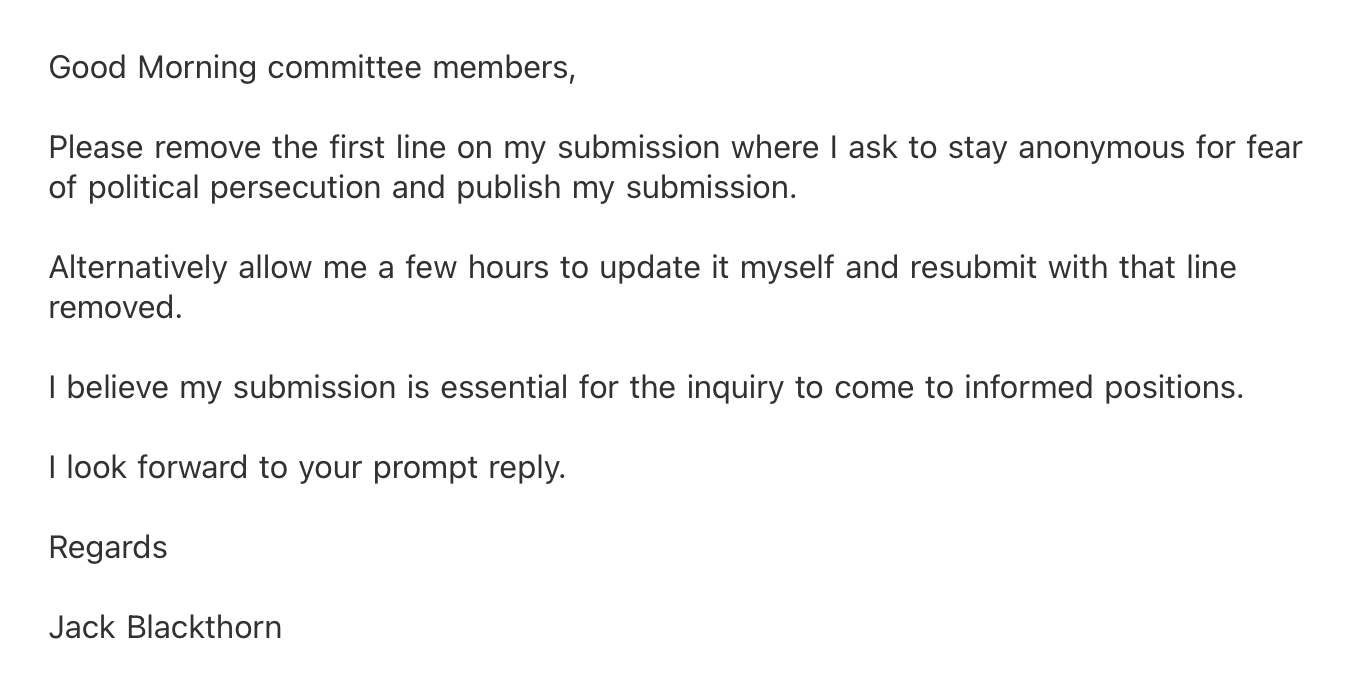 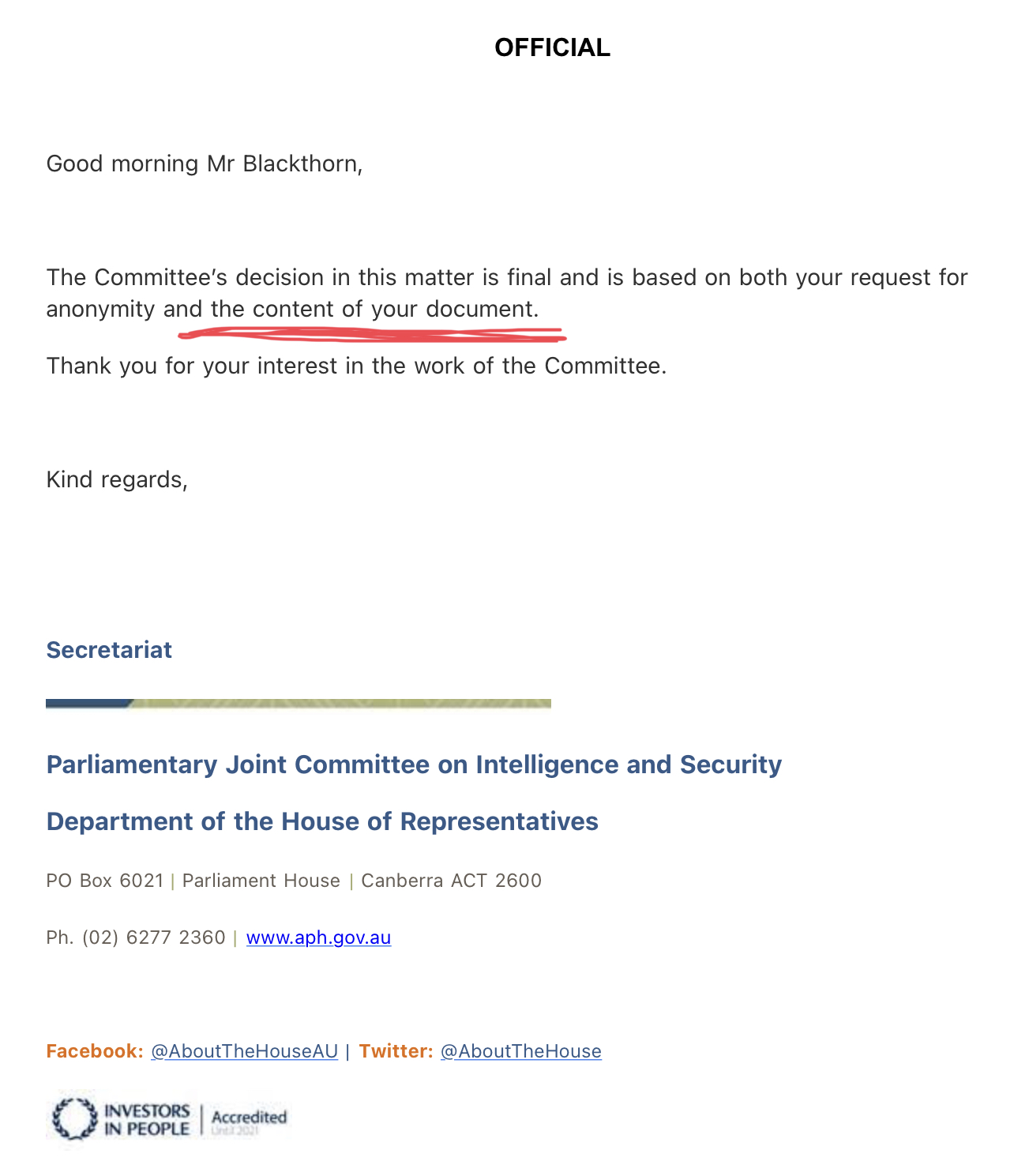 EDITOR: Note the sequence of events:

The polite way of putting this is that they are being slightly bureaucratic about the whole thing. A more accurate way to describe this is to say that they are lying, they are being criminally underhanded, and that this is a frank admission by the so-called “inquiry” that they are only interested in publishing material and hearing testimony which agrees with the conclusion they intend to reach.

Another day, another tyranny in the Union of Soviet Socialist Republics of Australia. 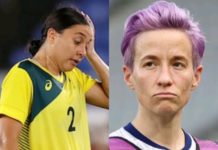