Another weekend, another round of massive protests Australia wide against vaccine mandates. Let’s do the rounds.

You know the drill. The crowds once again are massive, demonstrating that opposition to Covid Tyranny is mainstream. As usual the government ignores them because in the words of Adam Piggott:

“I used to think that these people did not know what that word means. But it was I who misunderstood the democracies. The abuse of power while giving the plebs the illusion of both participation and representation is what the democratic process has always been about.”

Bit by bit, we see this understanding dawning on the protesters. Today they descended upon a police station in Melbourne’s CBD chanting “You serve us”.

Melbourne The People vs The Police… TRUTH vs Lies… Long Live the People pic.twitter.com/hTgsD5xxoE

XYZ’s report on last weekend’s protest, which carried the line “get your hands off our kids” in the headline, got some attention, indicating that concern is widespread over the Regime’s push to vaccinate children.

Naturally, the Lying Press has been ordered to run interference. One scurrilous outlet honed in on a small coffin with a masked barbie doll receiving the killshot placed inside, carried by a protester with the intention of exposing the danger of Covid “vaccines” for children: 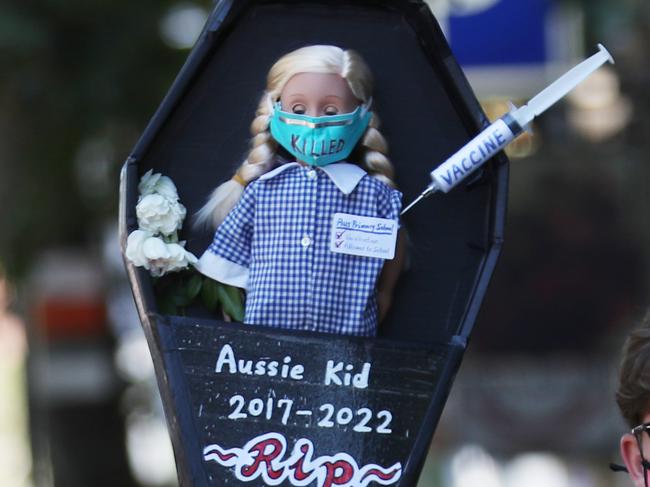 They have gone so far as to label it vile:

In late 2021 the Lying Press focused almost exclusively on a miniature gallows that was carried at a protest in Melbourne. Expect this barbie doll to become the new centre of their attention as they attempt to label any opposition to Covid Tyranny as “extremist”.

WHO SHOULD GET VACCINATED

The COVID-19 vaccines are safe for most people 18 years and older, including those with pre-existing conditions of any kind, including auto-immune disorders. These conditions include: hypertension, diabetes, asthma, pulmonary, liver and kidney disease, as well as chronic infections that are stable and controlled.

If supplies are limited in your area, discuss your situation with your care provider if you:

Children and adolescents tend to have milder disease compared to adults, so unless they are part of a group at higher risk of severe COVID-19, it is less urgent to vaccinate them than older people, those with chronic health conditions and health workers.

More evidence is needed on the use of the different COVID-19 vaccines in children to be able to make general recommendations on vaccinating children against COVID-19.

Last year three schoolchildren collapsed at Sydney’s Olympic Stadium after they received the jab. Naturally, the story was ignored:

Evidence from England indicates a spike in heart attacks for young boys due to the vaccines:

The mortality data for England and Wales from ONS from 1 May 2021 until 17 September 2021 shows a significant excess, particularly in the 15-19 year age group. Depending on the baseline chosen, the excess for 15-19 year olds is between 16% and 47% above expected levels (see table 1 and 2). COVID-19 deaths were too small in number to account for the excess. A disproportionate number of these excess deaths were in males. A certain amount of variation by random chance would be expected but an increase of this proportion is large enough not to be dismissed without further investigation…

A similar magnitude of excess is seen in the 20-29 year old age groups compared to 2020, although background (2015-2019) rates are higher. Comparing just deaths in males aged 15-19 year olds, there were between 52 and 87 excess deaths (depending on baseline). This clear predominance of male deaths could be in keeping with known risks of myocarditis which has a bias to men and boys.

Data demonstrates that you are more likely to get sick or die from an adverse reaction to Covid vaccines than you are to catch Covid or die with Covid if you are unvaccinated. Given these findings, Vox Day has noted:

It bears repeating, it should be illegal to push these not-vaccines on children. Despite this, the Australian government is going all out to inject children and is clearly concerned by mounting opposition. Last week the Lying Press inverted and projected this insanity back on the protesters: 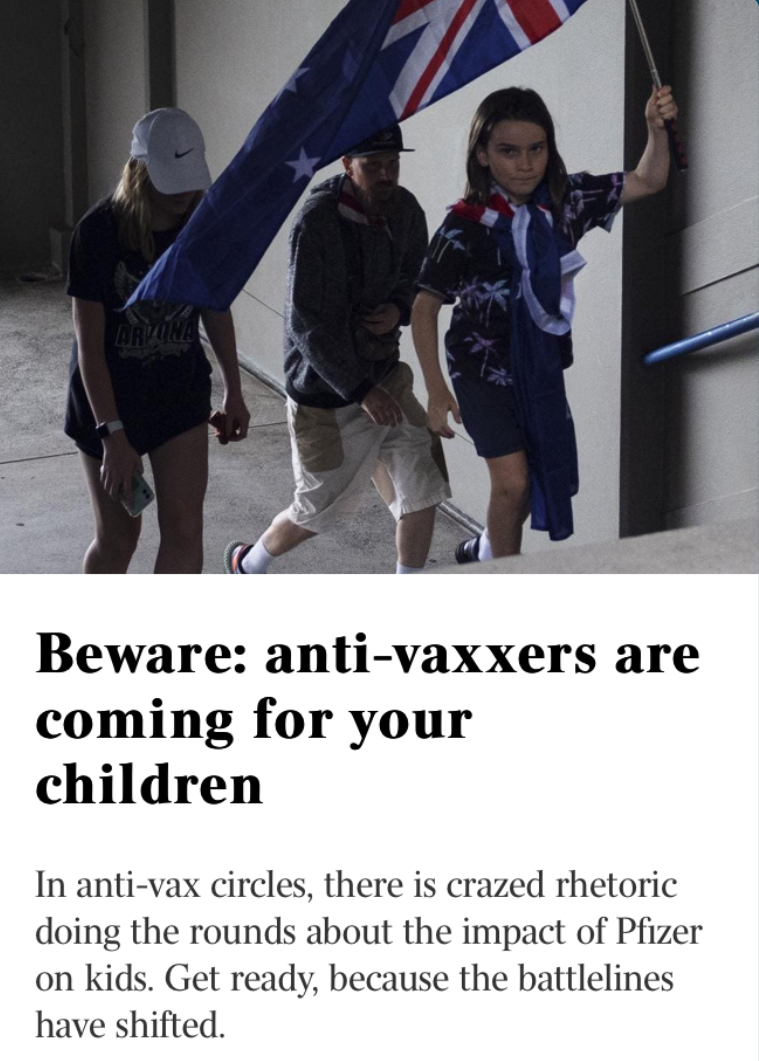 Thus the pattern is set. The government is coming for your children. If you oppose their bloodlust they will try to throw the accusation back at you. I believe there is a precedent for this.