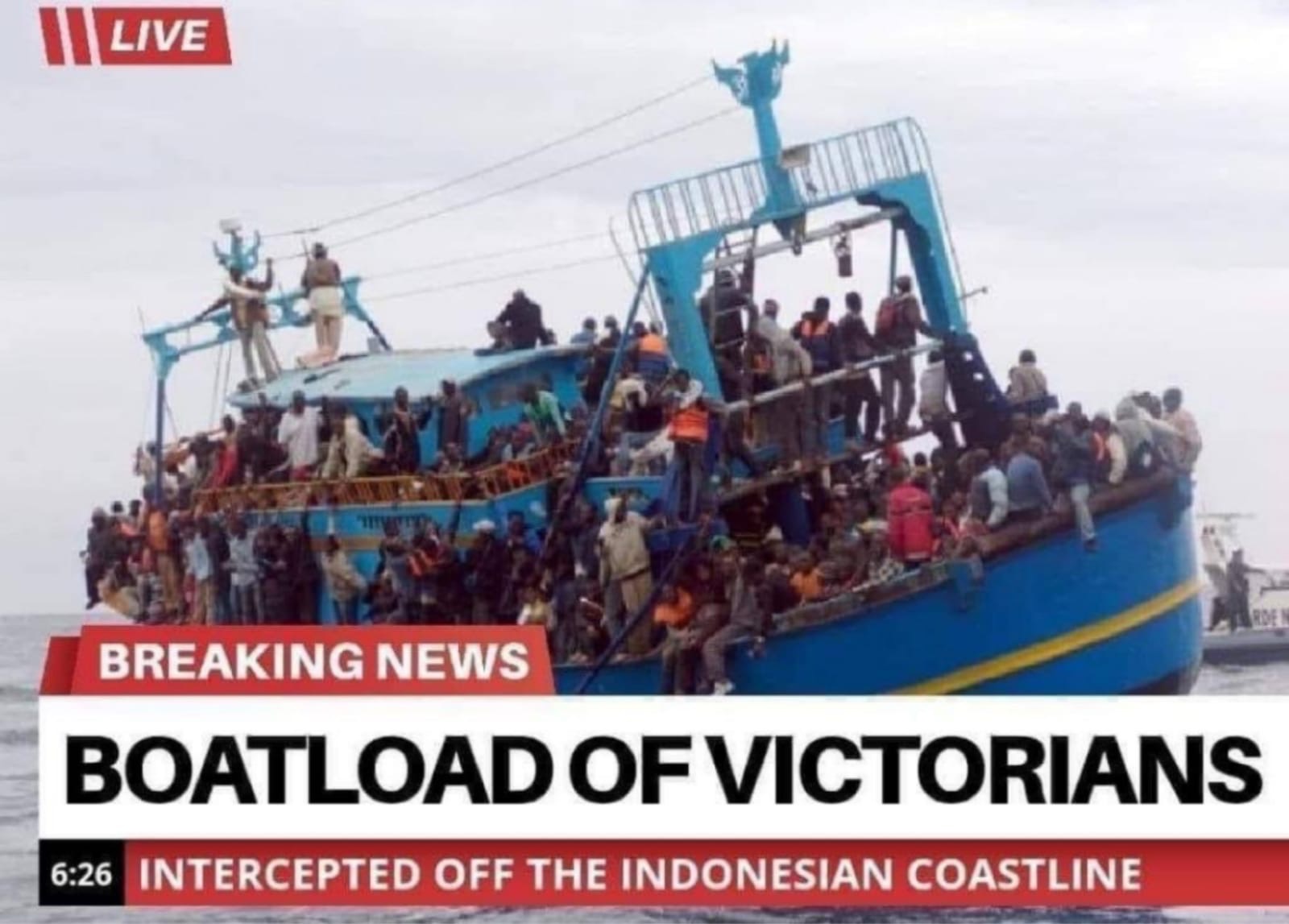 A boatload of ex-New Australians believed to have fled Victoria is currently stranded off the Indonesian coast. Even before the coronavirus lockdown the Indonesian government had made it clear they would not accept anybody from Victoria under any circumstances, stating that Victoria is “full of flogs”.

The XYZ spoke to one of the refugees, a Pakistani by the name of Ikeepmyteef Inajarbesidethebed:

“When I moved to Australia I thought I would live with the kind of Aussies I saw on the movies. Laid back people who say what they think and go to the beach every arvo. When I got there I was surrounded by people from all over the world, everybody worked too hard but didn’t get paid enough. We travelled hours every day to get to work, we were too scared to speak our mind, and I never even went to the beach.

“Sure the food there is okay but it is not as authentic as it was back in Paki. I miss my family, I miss my culture, I just want to go home.”

Asked how the coronavirus had impacted life in Victoria, he answered:

A spokesperson for the Australian Greens has backed the Indonesian government’s stance:

“Look, we only care about refugees if they are trying to break into Western countries. If the Indonesians let in this boatload it will simply encourage more New Australians from Victoria to to risk the perilous journey. Aside from potentially being swamped by Victorians, an open border policy would undoubtedly lead to unnecessary loss of human life.

“Furthermore, these refugees would find it difficult to integrate into Indonesian society, undermining social cohesion, and we doubt that they have the infrastructure nor the cafe culture to absorb mass immigration.”

According to a spokesperson for the Liberal Party:

“This represents a complete failure of the Daniel Andrews Labor government. The Liberal Party has done everything it can to screw over Anglo Australians by importing millions of immigrants from the 1950’s onward. But Dick Ears Dan has run his state so badly that he is scaring away all the diversity.”

Currently the only people to advocate for the rights of the Ex-New Australian Victorian refugees was a small group of racists:

“All these people want is to live again with their own people in their own lands. They have learned the hard way that the glittering lure of the capitalist West is an illusion. Consumerism and material comfort is no replacement for family and the simple joy of living with the people you love.”