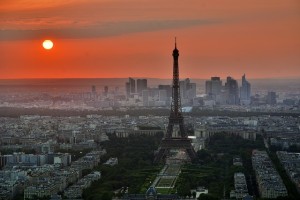 Through a form of serendipity, I found myself in Paris this weekend. Travelling by high speed train without incident, I proceeded to go bar hopping and dining and sightseeing and even to a rock concert.

Having been in Krakow the week before, I was drawing parallels between the cities. Firstly, in large parts it wasn’t so Christmassy. The decorations, with a few exceptions, were non existent or spartan.

Upon walking into bars, concert halls, museums and monuments I was happily required to open my jacket to provide evidence I was not a wanna be martyr. A practical precaution I was happy to oblige.

Krakow was much less multicultural and evidently safer. But I came for a good time, so with some help from plentiful boozing, I enjoyed the Paris experience.

The police and military presence was unmistakable, with heavily armed military members being a relatively common site in potential targets. Weirdly, this was a reassuring presence.

Not once did conversation veer towards the topics of terror, Islam or climate change: all of which were elephants in the room in Paris at this weird conjunction of cognitively challenged associations and dissociations. Like in a postmodern scissors paper rock, one must deal with the imposed reality that terror oppresses Islam, climate change causes terror and Islam will save us from climate change.

Paris and its history always fascinates me. Although it is a capital in decline in a country in decline, its history is undeniable. Strolling through the Louvre, I was compelled by the twin thoughts of the wonder and delight I experienced from viewing the relics from ancient civilizations and their weirdly exotic artifacts which, along with so much western art, would be targets for destruction by the zealots of the world, especially those of the Islamic State.

The city itself resonates with the names and achievements of men who delivered concepts of Liberty, Equality, Fraternity. These concepts probably do not thrive without a shield to protect them from the assaults of authoritarianism, extremism and nihilistic suicidal senselessness.

Whatever the future may hold, there is a glorious and worthy history of Western Civilization. The spirit of the French did not seem crushed, but there was enough to imply that the shield that was cast aside in the name of unconditional tolerance, is being grasped for in the face of assault from the intolerance which the West sought to wish away by inviting it into our midst.