It’s happening. All cause mortality in Australia is up by 20 per cent. 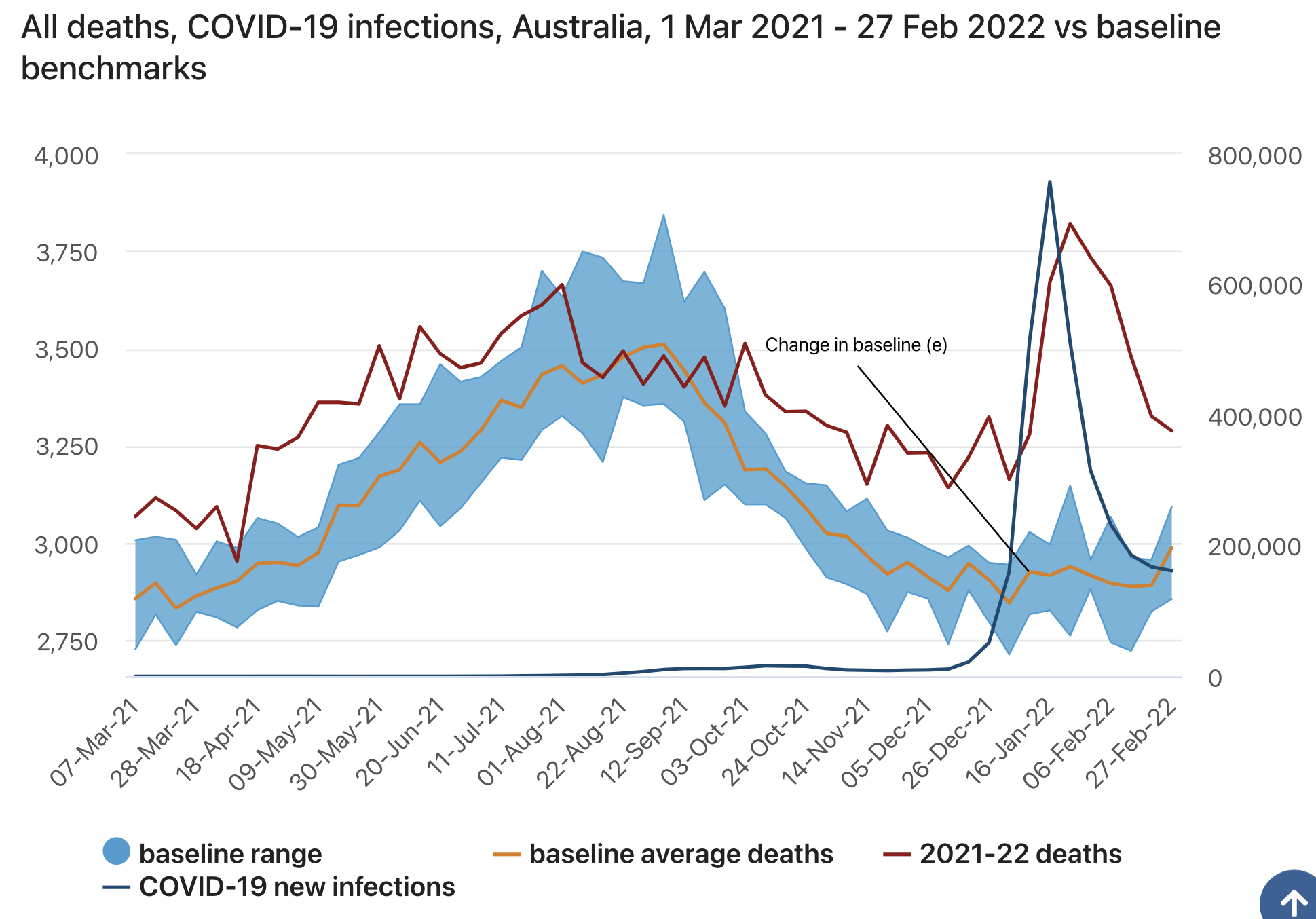 This is the biggest news story on the planet. It has been confirmed by data from the Australian Bureau of Statistics and it was tweeted by a real life journalist so it must be true.

Analysis of the report makes for disturbing reading:

In this report, data for 2021 is compared to an average number of deaths recorded over the 5 years from 2015-2019 as was the case in previous publications. Data for 2022 is compared to a baseline comprising the years 2017-2019 and 2021. 2020 is not included in the baseline for 2022 data because it included periods where numbers of deaths were significantly lower than expected.

It’s remarkable that deaths were lower in 2020, when we had lockdowns but no vaccine, than in 2022 when we have vaccines and no lockdown.

When considering data purported to represent a spike in Covid deaths, it is unclear whether a distinction is made between deaths with Covid and deaths from Covid: 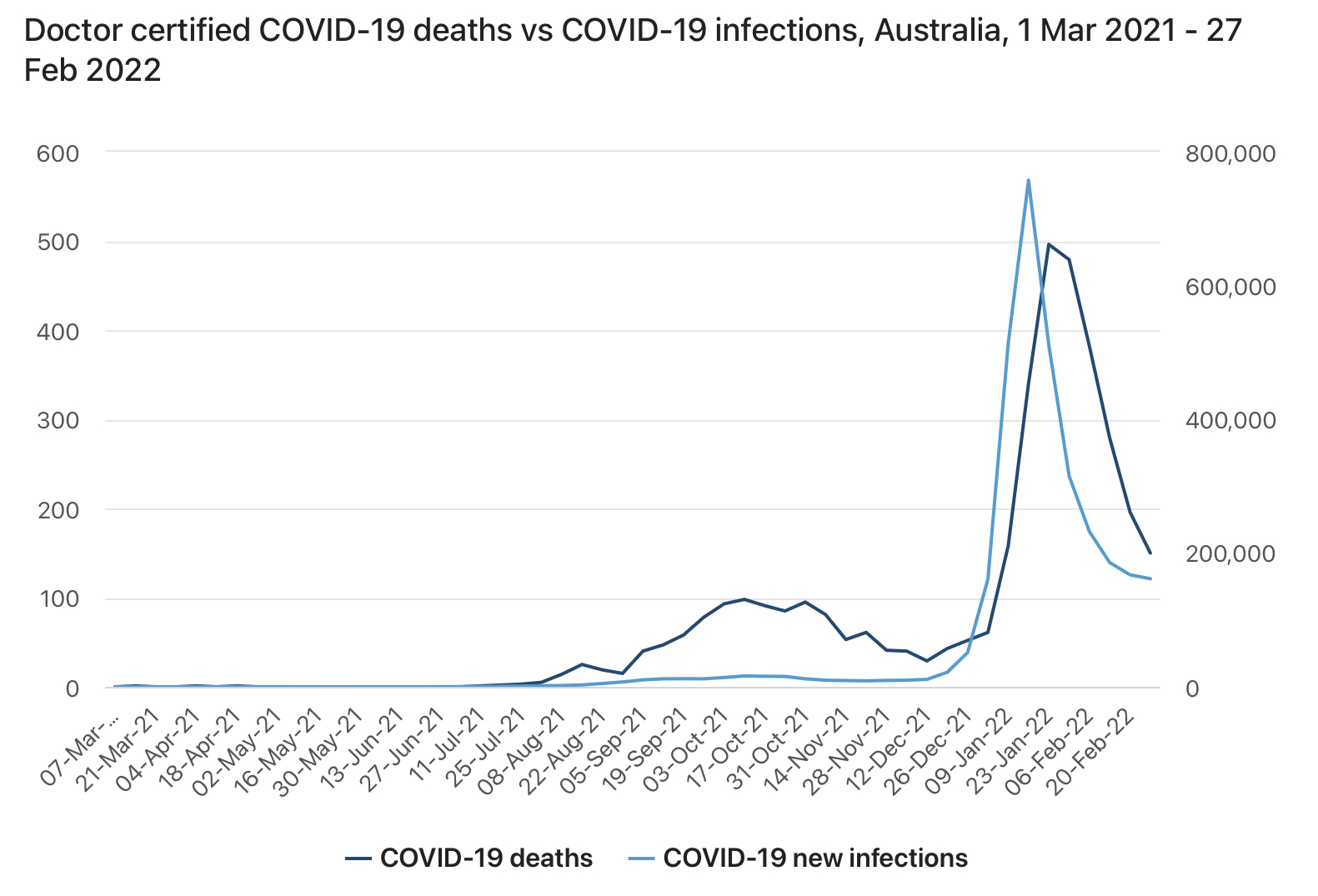 This distinction is important, as former Australian Prime Minister Scott Morrison reminded us.

Wow….it only took 2 & a half years of fearmongering & making everyone’s lives miserable to make the distinction between “with” & “from”! Many of us already knew this but we were called every name in the book! https://t.co/3hDo5VRCTb

Furthermore, XYZ News demonstrated throughout 2021 and early 2022 that state governments repeatedly attempted to disguise, through the sneaky use of wording, that the majority of purported deaths with Covid were vaccinated.

It is also suspicious that deaths from influenza were reportedly lower in January and February 2022 when so many deaths with Covid were being reported:

Along with the unreliability of PCR testing, this lends credence to suspicions that flu and pneumonia cases and deaths are being mislabeled as Covid. Alarmingly, deaths from heart disease, cancer, diabetes and dementia all increased significantly:

Dementia, including Alzheimer disease, is the second leading cause of death in Australia and counts of deaths from dementia have increased steadily over the past 20 years. This increase should be taken into consideration when comparing counts from 2021 and 2022 against baseline averages.

It is possible that the latter two, diabetes and dementia were caused by the lingering unhealthy effects of lockdowns, during which already unhealthy had even less exercise and sunlight, and the elderly had less contact with their families. A string of sports stars past and present have fallen sick or died from heart attacks or myocarditis, and heart attacks have spiked overseas as well.

This data is most concerning considering warnings by esteemed scientist Dr. Michael Yeadon:

He warned that given the use of the new, untested mRNA technology, the use of spike proteins in the “vaccines” and the similarity of the cells used in the “vaccines” to human cells, there was a high likelihood that the vaccines would harm and/or kill a large number of people.

He noted that it was highly unlikely that the four major “vaccine” producers – Pfizer, Astra Zeneca, Moderna and Johnson % Johnson – all decided to use the new mRNA technology independently of each other, indicating a high degre of collusion. He also stated that the dangerously short development time – a year – of the vaccines indicated that basic safety tests simply had not been conducted.

Considering these warnings and this official ABS data, it is vital that multiple, thorough and independent studies are conducted immediately to determine whether there is a direct link between Covid “vaccines” and Australia’s death spike. All vaccinations should be halted until safety can be assured.