So, women should not be involved in politics, all political parties are onboard with Covid Tyranny and The Great Replacement, and the holocaust never happened. 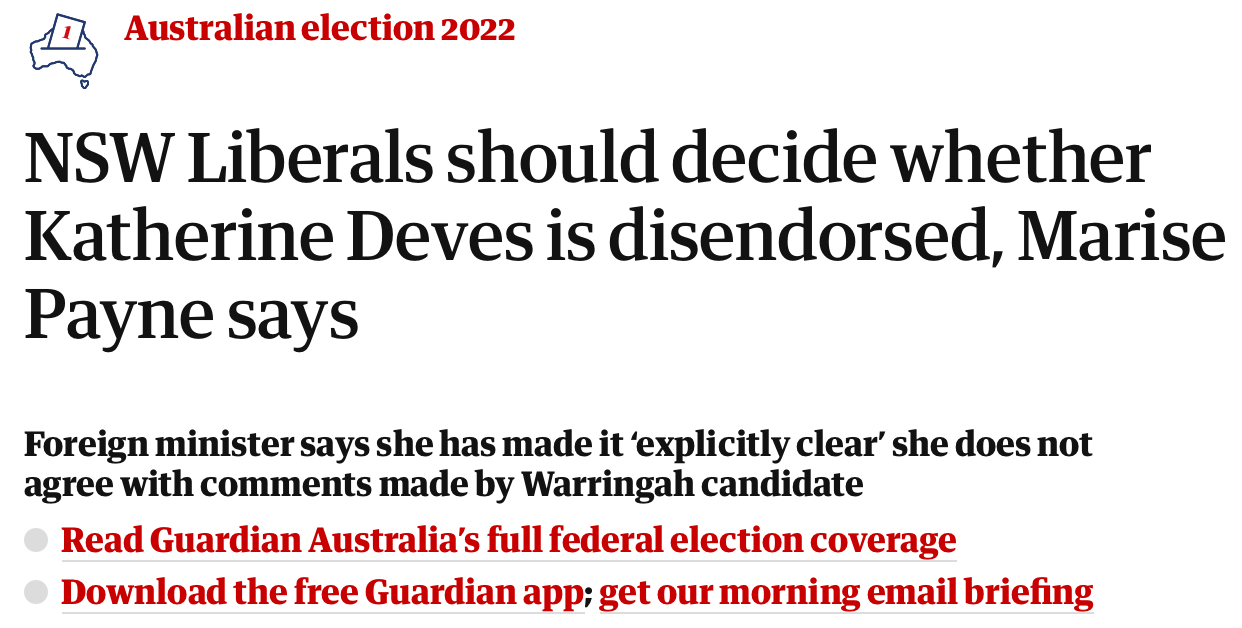 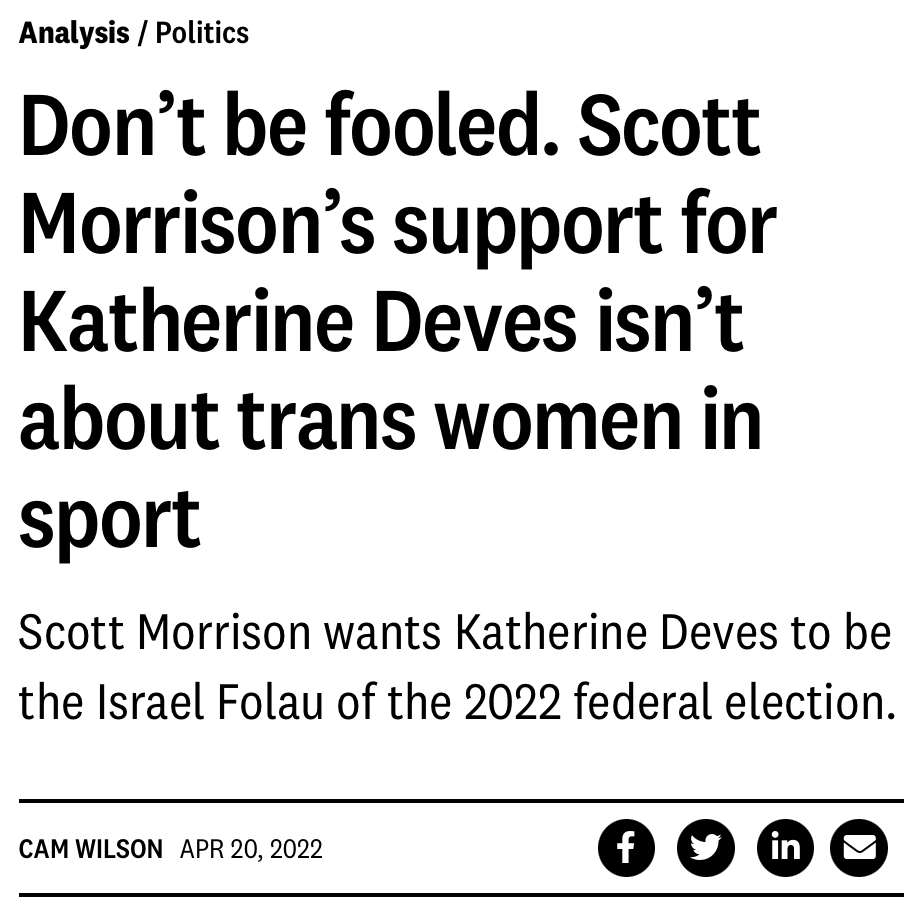 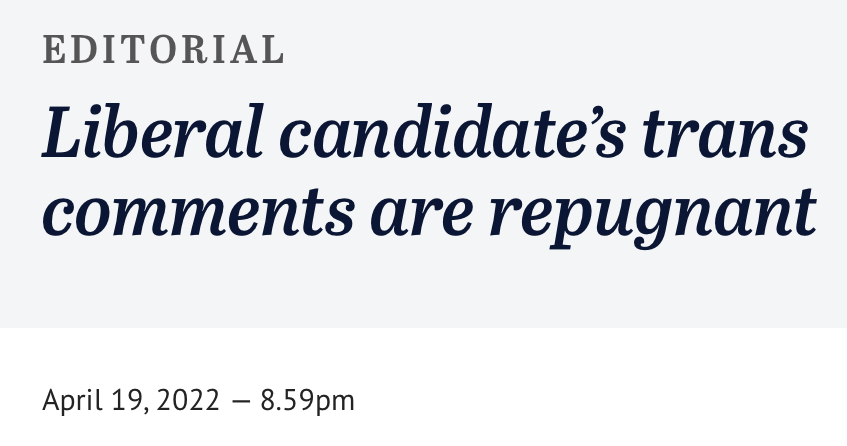 I’m going into bat for this chick.

Katherine Deves is the Liberal candidate for the seat of Warringah in the upcoming federal election. She has accurately pointed out that:

Because she has stated the truth so plainly, if she is allowed to run she will garner unprecedented support. Hence the groomer establishment has launched an all out assault on Deves to prevent her candidacy.

But in a letter to supporters tonight, Ms Deves said she was withstanding a savage backlash and had received “death threats”.

“My opponents, parts of the left media and twittersphere have been unrelenting in calling for me to be disendorsed, because of past statements.’’ she said.

“I have been bullied in the most vile way and received death threats. I’m not going anywhere, as the Prime Minister said yesterday.”

Ms Deves said her strong commitment was that Warringah should have a plebiscite.

“As with many seats across Sydney, how I was selected was not my decision. It was not how I wanted to come to represent you,’’ she said.

“I want to echo the sentiments of our FEC President, that depriving you of that is against our values.

“Our focus must now be on taking the fight to Zali, and stopping a Labor/Greens coalition from ruining Australia.”

Let’s have a look at how unhinged Deves’ detractors have been in public:

NSW Treasurer Matt Kean has declared that Ms Deves is unfit for office and that her “disgraceful” views on trans people were outright bigotry.

As Ms Deves declares she “wasn’t going anywhere” and was backed by former Prime Minister John Howard, the NSW Treasurer said the Liberal Party he loved was about dignity for everyone.

“My view is that this person should be disendorsed,” the NSW Treasurer told ABC Radio National.

That is actually true. The values of the modern Liberal party is buttsex for five year olds.

“Describing Wear It Purple Day – a day that celebrates inclusion and diversity, that focuses on reducing bullying and suicide amongst young gay and lesbian kids – she described it as a grooming technique.”

“She invoked the Nazis to attack trans people, comparing one case to the grudge trails of the Third Reich I mean, to compare this issue to one of the worst atrocities in human history is nothing short of appalling. Absolutely disgraceful.”

We’ve been over this one as well. The West has forgotten so much of its cultural heritage that the purported crimes of the National Socialists in Germany in the 1930’s and 40’s are literally the only reference point people have these days regarding a tyrannical regime. We are educated about their purported policies in order to prevent tyranny from ever occurring again.

However, whenever somebody points out “hey, this is like what the nazis did” they quickly discover that the only people who are publicly allowed to use Godwin’s Law as a legitimate argument are those pushing the establishment Narrative and jews.

When highlighting the tyranny of current day policies it is far more apt to refer to the crimes of the Soviet Regime, which preceded the Germans, were far worse, and, well, happened.

“She compared transgender people being removed from their homes to the stolen generation, one of the darkest chapters in Australian history, and she also said that half of all male trans people are sex offenders.”

Again, the Stolen Generation is a fiction. To combat liberalism, we have to learn our history and stop fighting on the terms. You know the drill.

“I mean, that’s just outright bigotry. We live in a cosmopolitan, multicultural society where people are free to be themselves. And that’s a fundamental tenet of liberalism.”

The fundamental tenet of liberalism is to break down every connection people have to one another, supposedly with the goal of engineering the perfect Autonomous Individual, but in reality to make us entirely dependent upon the State.

Brainwashing young children into cutting their dicks off is perfectly in line with this fundamental tenet of liberalism. It steals children from their parents, estranges them from their friends and their own nature. Half of the victims of extremist transgender propaganda commit suicide, and the half that manage not to are imbued with a permanent victim mentality.

This outright satanism has been pushed by a minuscule fringe of powerful people who control the information flow. Nobody actually wants any of this, yet anybody who speaks out against it is labelled “divisive” by the controlled media and politicians.

To prove this point, look at what children get up to when they are not subject to the propaganda of groomers in schools. They have no interest whatsoever in cutting their dicks off. They’re too busy endangering their own lives as it is:

That channel has just become the greatest thing on the internet. Not only does it make the case for banning the promotion of extremist transgender propaganda on pain of death, but the complete removal of television, computers and the internet.

We’d all be a lot happier.