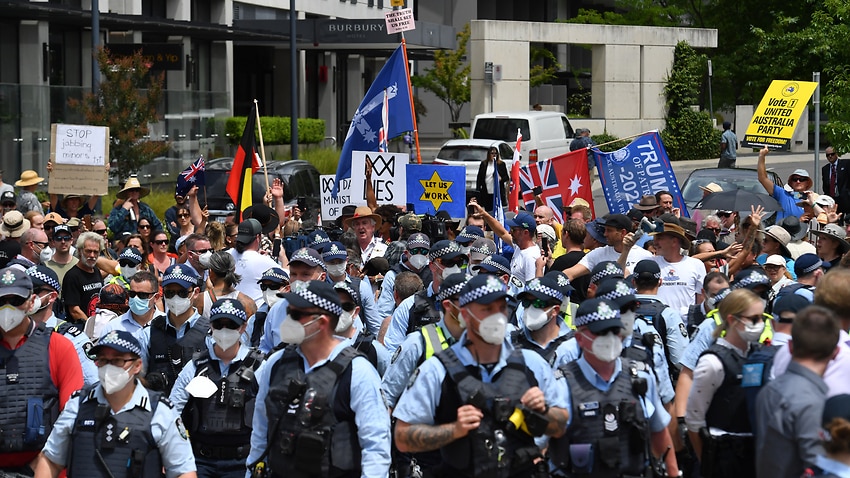 The federal government is scrambling to bolster security after Parliament House and the Prime Minister were mobbed in successive days by ordinary Australians furious at communist-tier vaccine mandates:

The federal government will spend more than $60 million to combat violent extremism, targeting the rapid rise in conspiracy theories during the COVID-19 pandemic and fears for MPs safety.

Home Affairs Minister Karen Andrews announced the funding boost on Wednesday against the backdrop of an upcoming federal election, amid concerns this could act as a flashpoint for misinformation and hate.

Of course her name is Karen.

The response also follows warnings from the nation’s security agencies about the threat posed by “single-issue” violent extremism, such as recent anti-lockdown protests.

Funny how there was no terror warning immediately after a rowdy bunch of aboriginals twice attempted to burn down Old Parliament House and then stormed the new one.

They only ever seem to freak out when White people get angry.

Ms Andrews said the government had “zero tolerance” for anyone threatening “the peace and cohesion of our society by trying to use violence to achieve a political, religious or ideological goal”.

“Australia is a peaceful, tolerant and harmonious country, but we cannot be blind to the fact that there are those among us who seek to sow hate, fear and discord,” she said.

“Violent extremists may have a range of ideologies and motivations, but none of them are welcome in this country.”

Australia is not a peaceful, tolerant and harmonious country, but it used to be. Our forefathers spent almost two centuries smoothing over ethnic, class and religious differences between English and Irish settlers to form a unique Australian identity. Then after World War 2 our politicians, in league with some special friends, decided to destroy our national identity by bringing in people from every nation in the world.

Naturally, this created massive artificial fissures in Australian society as the newcomers created separate nations within our nation, and were encouraged to do so at every step of the way by the divisive policy of “multiculturalism”.

When native Anglo Australians understandably protested at disproportionate levels of violence by non-White migrants, and at our deliberate replacement and the deliberate destruction of our culture, we were labelled the “violent extremists”.

Genocide is violence, whether it is conducted swiftly by mass execution and starvation, as occurred in Turkey and the USSR in the first half of the Twentieth Century, whether it happens slowly, as occurred throughout the West via mass immigration after World War 2, or swiftly again, as is occurring today through the mandating of dangerous vaccines globally.

We are facing nothing short of State Terrorism.