Good news everybody, we have just raced past Israel’s percentage of people who have had their first jab. In your face, jews.

The bad news is that the people who invented the coronavirus pandemic do not intend to let up for a minute now that Australia has caught up to the rest of the developed world’s vaccination rates. I had been wondering what the great rush was to get us to 70% or 80% and now we know. 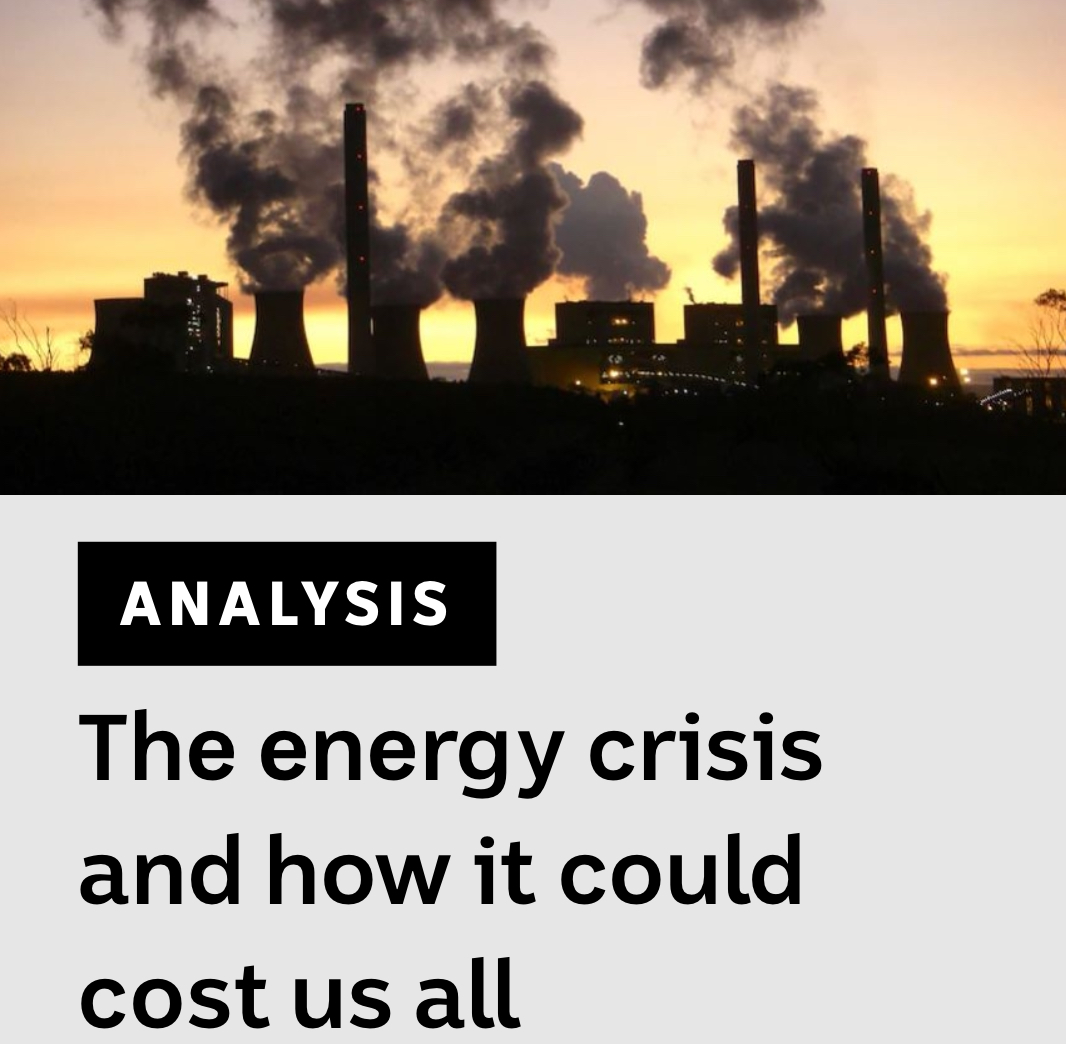 A global energy crisis is being engineered. You always want to make sure you weaken the immune systems of the majority of the population before you do that. Makes them extra malleable.

Due to Europe’s over-reliance on unreliable renewable energy because climate change, they need more gas from Russia. Oil and gas supplies were already under pressure due to disruptions to the world’s supply chains during Covid. China is frantically building more coal-fired power plants after making similar carbon-target blunders.

Naturally, the world’s Lying Press is telling everybody it is due to climate change, not irresponsible actions taken under the pretext of the climate change scam.

After making Covid vaccines as mandatory as he could make them, Scott Morrison is now fulfilling the next command from his masters – engineer a similar crisis in Australia. 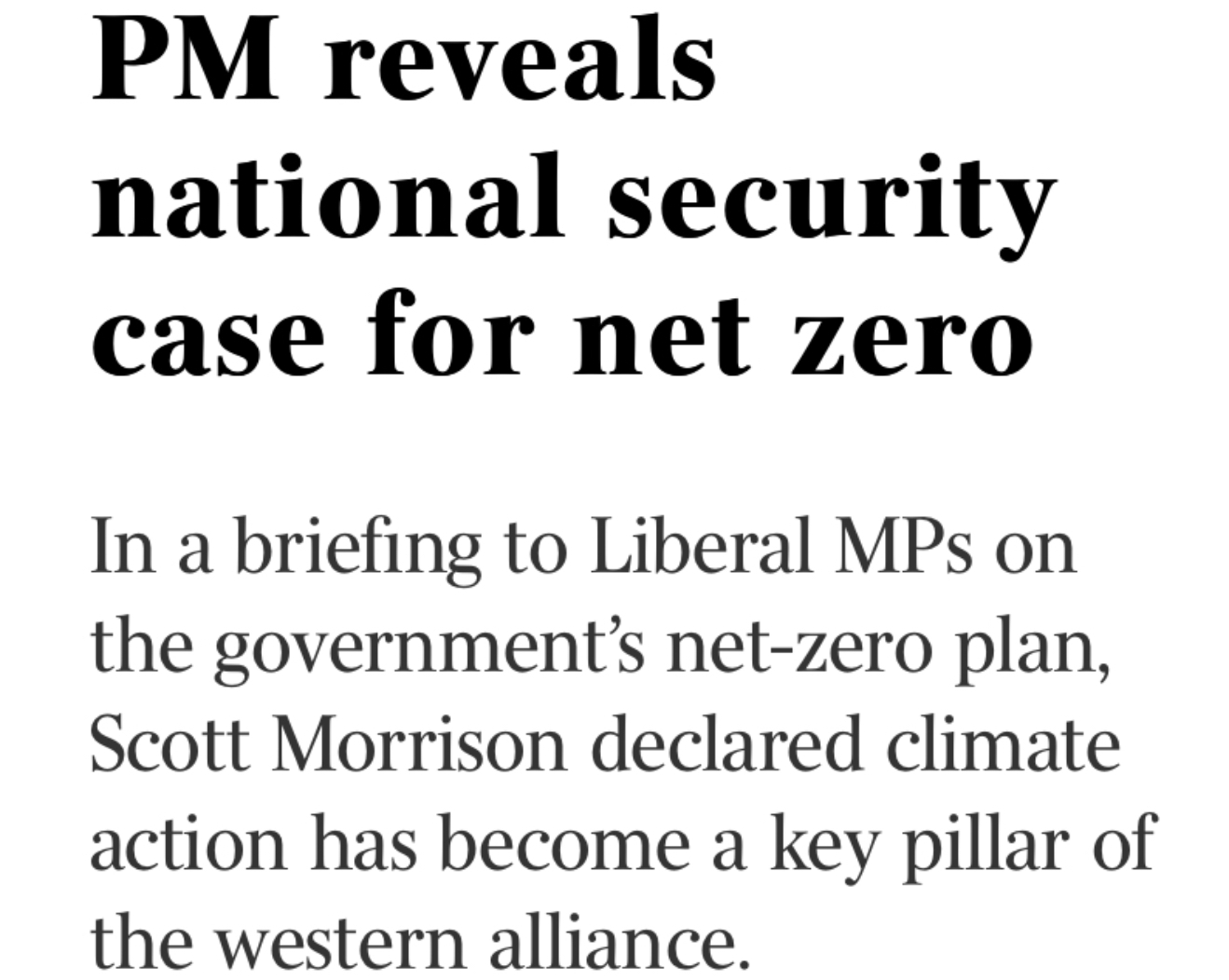 Apparently, action on climate change is a national security issue and a key pillar of the Western Alliance. In World War 2 we bombed Germany’s power stations. We even flew bombers all the way from Africa to bomb their oilfields in Romania. It makes no sense to bomb our own energy sector to make us more secure.

In other words, it’s a lie.

For Australia to achieve net-zero carbon emissions by 2050 we would basically have to destroy the coal industry, gut the mining industry, and doom Australians to energy insecurity and economic poverty.

Standing in the way of all this is a red faced philanderer by the name of Barnaby Joyce.

Prime Minister Scott Morrison could head overseas at the end of this month without a deal to reach net-zero by 2050, as the Nationals refuse to sign a deal that would “harm” regional Australia.

On Sunday, the Nationals held a four-hour meeting in an attempt to come up with a position on Energy Minister Angus Taylor’s plan to reach net zero by 2050, to no avail.

On Monday, Nationals Leader Barnaby Joyce said it was impossible for the party to come up with a deal in four hours – despite the Coalition having been in power for eight years.

You can tell the Lying Press are pissed. So is Labor. After losing the 2019 federal election because Aussies rightly thought their climate change policy was insane, they threw a tantrum when their hopes that the Coalition would do it for them slipped from their grasp:

Mr Joyce went on to tell RN Breakfast what the Nationals were being asked to sign was “such a titanic change” to the trajectory of Australia, “that absolutely insists on due diligence”.

“To be frank, four hours on a Sunday night, to make a change that could be part of a process of redesigning the economy of Australia is not prudent,” he said.

“We will continue on trying to understand the issues brought in by members and senators … And from those various views, try and work out what our position is and what our caveats are if that position is to go forward.”

When asked whether it was possible the Prime Minister could head to Glasgow without a deal, Mr Joyce said the Nations would “try to be an effective member of the coalition”, but that they would not bend over to the detriment of regional Australia.

“We’re not going to be belittled, beaten into a position because others say that’s what they want,” Mr Joyce said.

“We are representing regional (Austrans). Our voice is … on their behalf.

“This will be the decision of the National party room. It is not going to be a unilateral decision of anybody.”

“A titanic change to the trajectory of Australia” is putting it mildly. Destroying our energy sector and our economy would effectively sign Australia over to the WEF’s Great Reset. It would ruin Australia, and those of us left alive would have no option but to beg Klaus Schwab for the pods, bug burgers and microchips.

Of all the people to stand in the way of this, at least temporarily, I never thought it would be Barny. Expect him to become the new hate figure of Australian politics.