It is curious that after a period of several days when an extremist leftist and an anti-white terrorist committed seperate mass murders and a man claiming to be a nationalist committed another, that the media has focused its attention on the latter 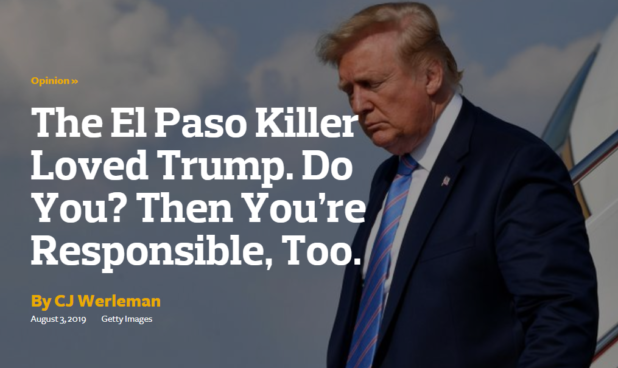 The dominant narrative is currently that white supremacy and gun ownership are the biggest threats to the security of US citizens, despite the fact that the vast majority of murders with guns and gun crime in the US are committed by non-whites in districts that heavily restrict access to guns.

Kind of reminds one of the time that both Germany and the Soviet Union, carrying out their arrangements according to the Ribbentrop-Molotov Pact invaded Poland, but Western democracies only declared war on Germany.

Here in Australia an ABC “journalist” on ABC News Radio went so far as to ask a so-called terrorism “expert” the following question (the wording is as close to the question as I remember):

“What threat is posed by terrorism from the white nationalist movement to a multi-ethnic country like Australia?”

This is a loaded question for two reasons:

I take no joy in pointing out that this escalating cycle of political and ethnic violence in the US and other European lands is exactly what The XYZ has predicted if the globalists continue to push their anti-white mass immigration agenda and deny natives of European countries the ability or the right to oppose it. As we said several months ago, the one thing that has prevented the slide into all out civil war in the West has been the restraint shown by white men in the face of an unprecedented wave of attacks committed against our people by the foreigners our governments have imported to replace us.

There is frankly very little we can do to stop any of this. If Western governments genuinely wanted to avoid civil war they would acknowledge that expressions of white grievance are justified and worthy of redress rather than characterising them as incitement of violence. Leaving aside the very real possibility that many of these incidents are false flags, the Christchurch Incident has potentially lifted the lid on the restraint of frustrated white men, a frustration which we here at The XYZ have worked so hard to channel into peaceful political action.

Thus it is important to revisit our analysis of what a Western civil war, particularly a US civil war, would look like:

The key political reason America did not fight the Vietnam War or the War on Terror like it did in World War Two is because it wasn’t fighting nazis. You can do anything you want to a nazi. (WW2 was also fought essentially in aid of the communist Soviet Union…)

Many predictions made here on The XYZ have proven to be correct. It appears Europe is heading toward restoration; the United States toward civil war which would result in the division into one or more ethnically based states; and a complacent Australia wll be divided up between India and China, with the possibility that communities of native British heritage people will still be allowed to congregate after the dust has settled.

I am getting pretty sick of being right.