I would like to state from the outset that yesterday we missed the perfect opportunity regarding our story Australia’s Disgrace: Lauren Southern declined visa, to run the headline “Based Peter Dutton BTFO’s TradTHOT Lauren Southern”. The moment has passed, so let’s press on.

If you think that was a weird opening paragraph, its purpose will become apparent later in this piece.

In yesterday’s article, I noted that Marxist extremist group CARF had been promoting the fake news line that Lauren Southern “may have applied for the wrong visa” in response to her Electronic Travel Authority Visa (ETA) being denied.

However it was not just the Australia-haters at CARF who were running this line. Some XYZ readers and conservatives in Facebook forums had either assumed, or were under the false impression from news clippings and radio reports, that Lauren Southern had simply applied for the wrong visa, similar to a blunder made by Australia’s fattest Muslim Yassmin Abdel-Magied who was denied entry to America several months ago.

This is not correct. As reported yesterday in news.com:

“Ms Southern had applied for an Australian ETA, or electronic travel authority. “The Australian High Commission have advised that you are not eligible for this service,” the website said. “You may wish to consider applying for a Visitor Visa (Subclass 600) with the Australian government”…

According to the Home Affairs website, an Australian ETA is for “short-term stays for tourism or business visitor activities such as attending a conference, making business inquiries, or for contractual negotiations” and is “not a work visa”.

A Visitor Visa (Subclass 600), which costs between $140 and $1045, entitles the recipient to visit Australia “for business purposes” for up to 12 months. Axiomatic Media is charging $79 for a basic ticket and up to $749 for an “intimate dinner” with the pair.

Mr Izaak told news.com.au the pair had applied for Temporary Activity Visas (Subclass 408) — which would permit them to work and normally take 10 days to process — “months ago” but had been “stonewalled and stonewalled with no response”.

“One-and-a-half weeks ago they asked for a criminal record check. Neither of them have criminal records, they got those clean, and still no response,” he said.

“Her immigration lawyer advised them to get a temporary ETA so she and Stefan can at least be getting the lay of the land, having a look at Sydney Harbour Bridge, [go to] Cairns for a crocodile safari, to immerse themselves in the country before they speak about it, and hope the government comes through with the [408 visa].”

But Mr Izaak said even the ETA was denied.”

So, both Southern and Molyneux have applied for the correct visa – a Temporary Activity Visa (Subclass 408) with plenty of time in advance, but have been delayed either by bureaucratic bungling or bureaucratic malfeasance (but I repeat myself). As Lauren Southern is to arrive early, she applied, on the advice of a lawyer, for a tourist visa – ETA – to cover her until her TAV came through.

To ensure we had the correct facts, we double checked with Axiomatic Events’ Luke Izaac, who has stated to The XYZ:

“It’s been over 2 months since the 408 working visa was applied for by both Stefan and Lauren. As the political stonewalling continued and we were asked to provide countless other pieces of documentation, we sought further legal council. Just under a fortnight ago (aware that Lauren was scheduled to land on the 9th) our immigration lawyer applied for a short stay ETA visa so Lauren could acclimatise to Australia while awaiting her clearance to work. Unlike the ‘instant’ nature of ETA’s, hers was deferred and 12 hours later declined…So to be absolutely clear: Lauren & Stefan have had a 408 visa application lodged for eons. The ETA was just a way to get her in for a week and a half to experience the country as a tourist, while hoping to be cleared on her 408.”

These are indeed the facts.

Unfortunately, a headline in the Australian, while not directly misleading, could have given some people the wrong impression: 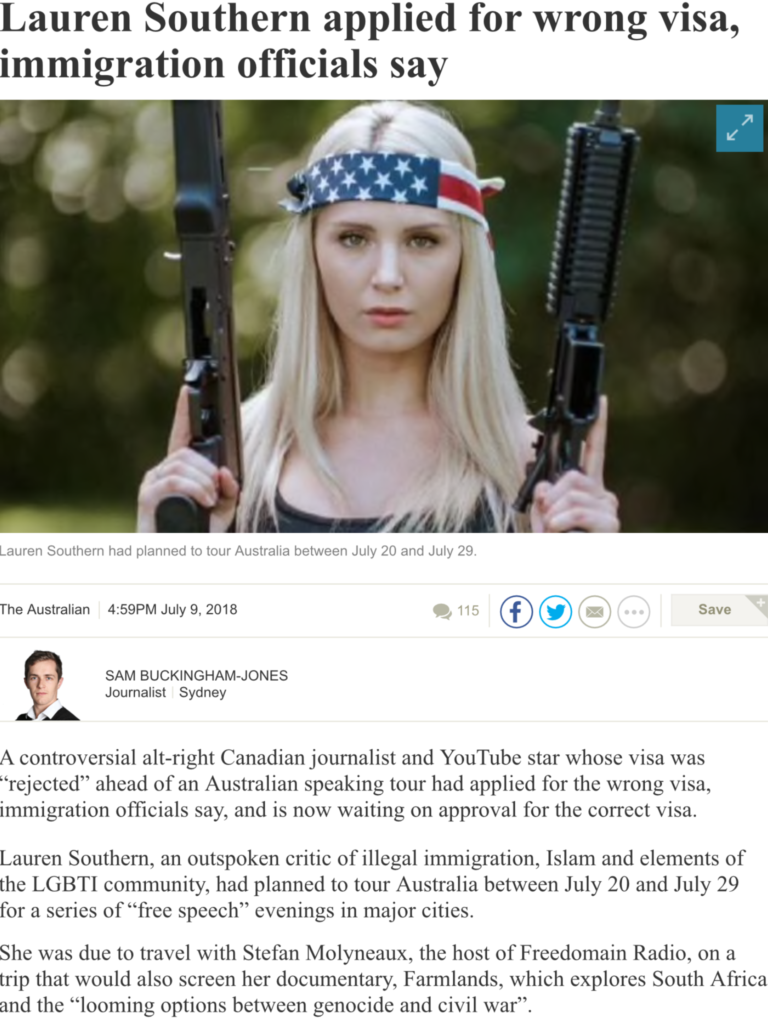 Given that many people get their news from headlines, this matters. At The XYZ we pride ourselves on headlines which tell the entire story of the article, “Senator slut-shames slut” and “Hot Asian chick employed by ABC who has seen a lot of penises hates white men” being two of our favourites.

“A controversial alt-right Canadian journalist and YouTube star whose visa was “rejected” ahead of an Australian speaking tour had applied for the wrong visa, immigration officials say, and is now waiting on approval for the correct visa.”

Leaving aside debate over whether Southern is actually alt-right, Southern is not “now” waiting on approval for the correct visa – she had already applied for the correct visa. One can definitely make the case that the “immigration officials” have not stated the facts clearly, and the placing of this at the top of the article, accompanied by the headline, can easily give people the wrong impression that Southern did in fact apply for the wrong visa.

The Australian did report the facts, corroborating the statements by Luke Izaac, further down the article:

“Dave Pellowe, director of Axiomatic Events, which hosts conservative speakers, said Ms Southern applied for the 408 “temporary activity” visa many weeks ago and had planned to come to Australia early as a tourist, hence the ETA visa.

“The advised turnaround for a 408 visa is 10 days,” he said. “Our immigration lawyer advised us it is run-of-the-mill for someone visiting Australia to travel under an ETA while they wait for the 408.

Hence why the choice of headline qualifies the Australian’s article as fake news. The fact we have had to publish a follow up article reinforcing these facts demonstrates this. The XYZ’s headline “Australia’s Disgrace: Lauren Southern declined visa” was far more accurate. Lauren Southern applied months ago for the correct visa to enter Australia on a speaking tour, and her application for a tourist visa, forced on her by the unreasonable delay, was indeed declined. It is highly suspicious that Southern’s and Molyneux’s visas have not been cleared, and the delay is a disgrace, especially given that we take in over 200,000 people every year into this country.

Lauren Southern has produced a documentary, Farmlands, on the plight of white South African farmers, which will be screened at the speaking events with or without her. Australia’s Immigration Minister Peter Dutton made international headlines earlier this year when he stated that white South African farmers should be allowed to come to Australia, a civilised country, for their own protection. Now is the time for Peter Dutton to back up these words to further the cause o African farmers, and expedite the entry visas for Lauren Southern and Stefan Molyneux.

Over to you, Minister.