Day 2 of Thomas Sewell’s trial featured dramatic cross examinations. Both the prosecution and defence concluded their submissions and the magistrate scheduled a verdict for December 20.

On day 1, the security guard who allegedly attacked Jacob Hersant outside the Channel 9 Building at 717 Bourke Street, Melbourne on March 1, 2021 claimed he heard music in the moments before the alleged throat punch. No other witnesses could verify this claim.

A fuller account of the evidence, testimony and cross examinations will be provided after the verdict, but for now let’s focus on two aspects of day 2 of the trial.

The first involves the moments in which Thomas Sewell and the guard were engaged at ground level. An interesting experiment is to ask yourself, if you have previously watched the footage of the incident, how many punches you think Thomas Sewell threw when the guard was on the ground.

Now watch the incident and replay the moments between the 20-35 second mark of this Channel 9 report several times.

You will notice that he did not throw any punches when the guard was on the ground. Sewell testified that he was in fact trying to get away from the guard, who was trying to pull him back. His t-shirt was ripped in the process of disengaging.

Intriguingly, all prosecution witnesses initially testified that they had seen Sewell throw punches when the guard was on the ground. When cross examined, they all eventually conceded that they could not say how many punches he threw or that they did not know if he even threw any.

It is a stunning example of how personal recollections can collectively be imperfect, and perhaps evidence that cultural bias against someone framed by the Lying Press as evil can alter recollection of events.

The second key aspect involved the alleged throat punch by the security guard. The prosecution chose a still frame from the CCTV footage in which the guard’s alleged throat punch of Hersant had not yet connected, and attempted to prove that it was an image of the guard pushing Hersant’s shoulder.

The Lying Press’ reporting on this matter was so biased, it has already become a meme: 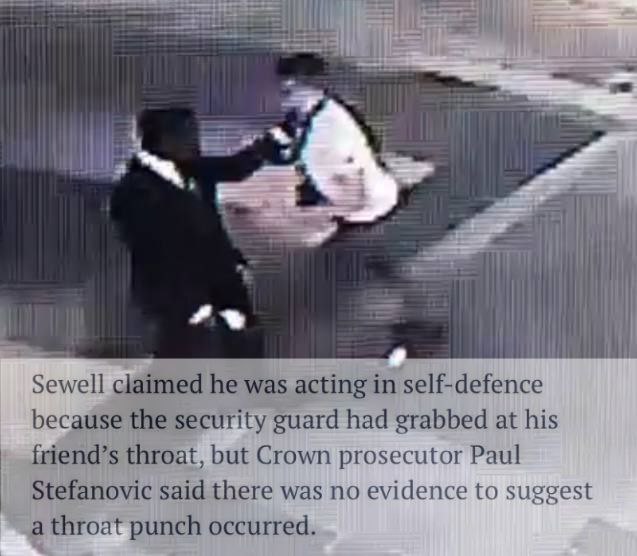 You can view a slow motion video of the exact moments below.

Under cross examination, Sewell gave a forensic explanation as to why the prosecution’s assertion was incorrect, punctuated by a stirring rebuttal:

Prosecutor: “Now you say Jacob was filming you, and Thaddeus Francis stepped in front of you. What he actually did, was not a grab to Jacob, it’s a push to the upper right shoulder of Jacob, or upper right chest. It is not to the neck. You dispute that?”

The prosecutor attempted the same argument when cross examining Hersant, who refuted the assertions:

Prosecutor: “After the two of them get up, they take a few steps then there’s some shaping up.”

Prosecutor: “Thomas was in no particular fear of this man though.”

Hersant: “I think he was in fear of him, he just throat punched me.”

Two other moments revealed the strong character of both Thomas Sewell and Jacob Hersant. Sewell was very clear about the purpose of his social media presence:

Prosecutor: “Now without getting into your politics and your ideology or whatever, you’ve got something of a social media presence for your organisation, yes?”

Prosecutor: “That audience there, it’s a platform for you to talk about injustices in the world, and in Australia in particular. How would you best describe your social media presence.”

Sewell: “To advocate for the existence of White people in Australia.”

Prosecutor: “Now the people who view this, i understand you use telegram?”

Prosecutor: “The people who follow you, would it be correct to say you’re preaching to the converted.”

Prosecutor: “People who have a strong interest in your position?”

Sewell: “I would say it is a cross section of the White Australian society.”

Prosecutor: “What was that white or wide?”

Sewell: “White, with a capital W. Make sure the journalists get that correct. Capital W. They’re both proper nouns.”

Hersant was challenged as to why he continued to film the incident between Sewell and the guard even though he was in fear for his safety:

Prosecutor: “You didn’t really take much distance of the two of them yourself, even though you’d been throat punched.”

Hersant: “I wanted to film it, because that was going to be my evidence, I thought I had a duty to film it, and if the tables were turned and it was against Thomas, I would’ve came to his defence.”

As stated at the conclusion of our report of day 1 of the trial, the point of all of this is that White people are being replaced. Those of us brave enough to follow our duty to secure the existence of our people are harassed by the Regime which intends to replace us. Incidents are engineered in the hope they will distract us and demotivate us from our mission. This merely reveals the manipulations of the Regime and strengthens our resolve to oppose it.

XYZ News will report on the verdict, expected Tuesday, 20th of December.