One of the greatest victories of the Marxist elites since the introduction of internet, has been the deprivation of children to develop basic cognitive skills that would otherwise serve them so well into adulthood.

No longer do they deduce to a conclusion playing Cleudo, nor learn basic useful monetary and business lessons on the Monopoly board, but instead opt for mindless, effortless hours in front of screens that do all the thinking for them, and retain their minds in the trancelike state previously reserved only for those addicted to poker machines.

One of the most important skills the internet has managed to seemingly eradicate, is the ability of recent generations to simply ‘join-the-dots’. Remember that game in our colouring books that looked like a page of randomly numbered dots, until when correctly joined together, a perfectly clear picture would form before our eyes? But just like board games and colouring books, such cognitive abilities and logical thinking now seem destined to the annals of time, which is where those committed to the downfall of Western society wish them to remain.

You see, if people today were capable of joining the dots, they would easily make startling discoveries from the bigger pictures being revealed, and begin arriving at even more startling conclusions. Imagine if people could join all the dots surrounding issues such as covid 19, vaccines, 5G networks, the 2020 presidential election, immigration (both legal and illegal), multiculturalism, mass shootings, food shortages, inflation, media bias, and the creation of non-existent racism, just to name a few. Would they not start asking some very uncomfortable questions that could lead to the disruption, or even derailment of the socialist agenda train? They may even stop trusting that the media is reporting the whole truth….. or any truth at all.

Yet while the pictures these dots form are so easily connected by some of us, a large proportion of society seemingly lacks the cognitive skills required to do the same, and remain totally oblivious to all those bleedingly obvious red flags that should make one question just what is actually going on.

Let’s take Hollywood as an example. Given that America is made up of roughly 50% Republican voters and 50% Democrat voters, how can it be that Hollywood is almost exclusively made up of radical, climate change, pro-abortion, LGBTQi rights supporting Lefties? Given the political demographic of the rest of the country, one would assume those who worked in the movie industry would also reflect that 50 – 50 balance. So, to anyone who can make the connection, it becomes obvious that the only way this imbalance could possibly happen, is that somewhere, someone controls who gets to become rich and famous and who doesn’t. And having arrived at that conclusion, a rational mind would not only question what they might have had to do to qualify as a ‘chosen one’, but also just how many other things these same people might control.

Another seemingly obvious dot has been Hollywood’s ability to so accurately predict the future. Every time they make a sci-fi movie, it’s never too many years before it becomes at least partial reality. Which is why films such as 2007’s “I Am Legend” should perhaps be seen more as a prophetic intent than entertainment. Hollywood always tells us what the elites are playing toward, because the best place to hide something is out in the open right under the public’s nose, and because people make a subconscious connection to such a scenario as being ‘just fiction’ due to their perception of what movies are.

But 2011’s “Contagion” took things to a whole new level, almost 100% identically imitating the still yet to come coronavirus pandemic, which would follow just nine years later. In fact, when we heard the arguments by health ‘experts’ for the mandating of masks, lockdowns and vaccines, their arguments were familiar to us…..because we had already heard exactly the same arguments made in the movie, nine years earlier. And our minds were already programmed to (the lie of) a SARS-CoV-2 evolving from bat poo to human transmission, because the movie showed us how it happened.

So I guess the next question we ask should be, “exactly what Hollywood is telling us by its recent obsession with everything ‘zombie’?” Then again, take a look around, and perhaps that reality is already upon us too. 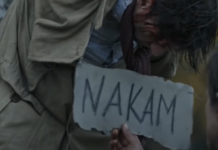