I had almost forgotten about Meshel Laurie. I won’t publish a picture of her, as many XYZ News readers are still recovering from our most recent piece on Kerry Chant.

Anyway, Laurie has criticised the Project for not being left wing enough:

Former The Project presenter Meshel Laurie has taken to social media hitting out against the entertainment industry.

The popular TV and radio presenter spoke about her 2019 exit from the Channel 10 show, claiming executives found her “too left”.

Laurie, 49, left The Project in 2019 citing personal reasons and “burn out” as the reason for her departure.

But in a series of Instagram posts, Laurie claimed that a network intolerance towards her political views in her final year and that years of ignoring her calls to diversify the show were also major contributors.

Perhaps some TV executives understand that there is only so far they can push. The Project is the most left wing show on Australian commercial television. Its job is to be the ABC wrapped in pink icing to make it palatable for university educated millennials to maintain the illusion that being left wing is cool when they face the reality check of having to make ends meet in the real world.

Its hosts pretend to ask the hard questions of Marxist terrorists such as Blockade Australia:

Twelve more climate activists have been arrested in Sydney after the second day of protests organised by Blockade Australia. Mali Cooper has just been released on bail after closing the Sydney Harbour tunnel and joins us.#TheProjectTV pic.twitter.com/99aneXupLF

And the self confessed “infiltrator” Lidia Thorpe:

Greens leader Adam Bandt has ignited a fierce debate by refusing to be seen with the Australian flag. Is it a national disgrace or an act of solidarity? Greens @SenatorThorpe explains.#TheProjectTV pic.twitter.com/2gzyzGIwQp

In reality they amplify the message of violent far left extremists.

She claimed that her political views began to be an issue for the show after Lisa Wilkinson joined.

“The same @channel10au execs who thought I was “too left” supposedly after Lisa Wilkinson joined,” she wrote.

“Although word around the camp fire was that they thought she was too old, so they wanted to surround her with much younger people.”

“How’s that working out for you?” she added.

Lisa Wilkinson used the Project platform to push an all-men-are-rapists message for several years. This recently backfired spectacularly when the trial of the man who made Brittany Higgins famous – ie she accused him of rape – was postponed due to comments made by Wilkinson at one of those cringe events where TV losers give each other awards.

The point is, perhaps the Project execs realised they could only have so many insane harpies on the show at the one time before it descended into 1960’s China.

A current trend of the permanent cultural revolution in the Australian television industry is to recognise an alt-light talking point – the use of aboriginals as tokens in order to virtue signal:

She also claimed that The Project’s Indigenous contributors during NAIDOC week were a “token” gesture.

“(There are) heaps of brilliant Aboriginal comedians … (but) you’ve never seen them on TV … (because networks) still give all the jobs to white men.”

“All good for you, but please don’t pretend you’re fighting for diversity while your contemporaries are unemployed.” 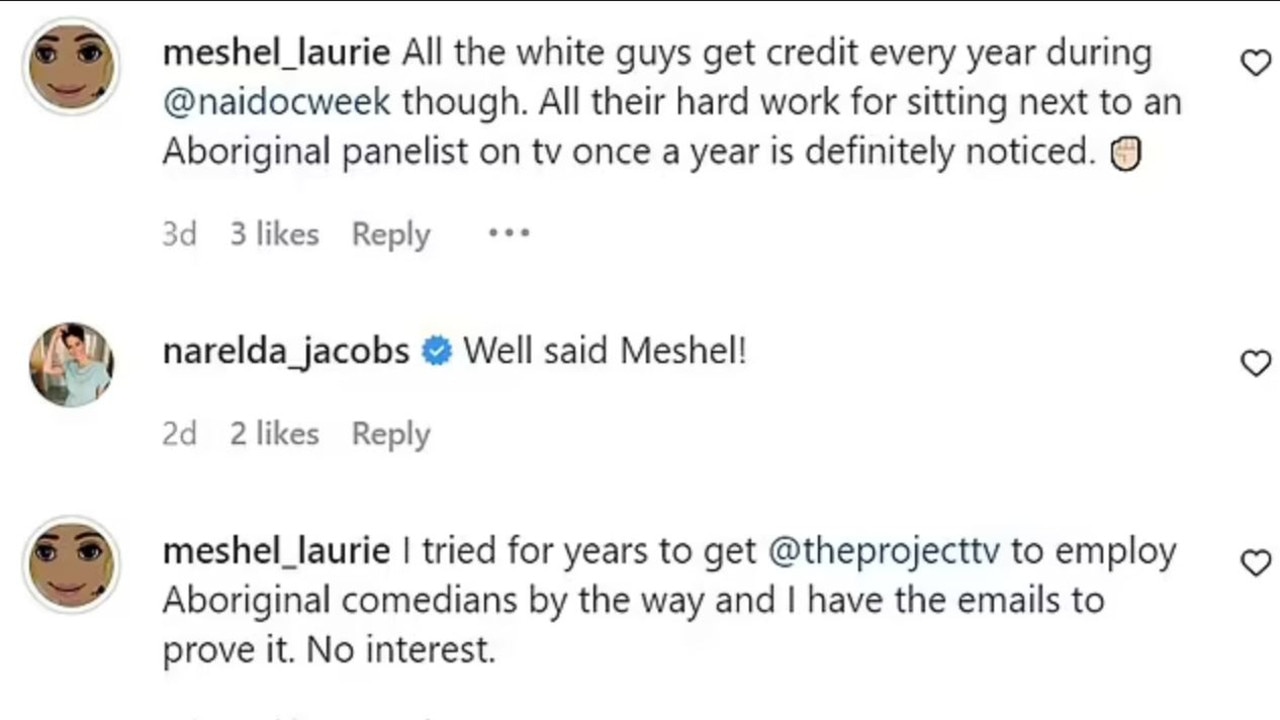 The ABC was recently dragged over its own self-lit coal pit for exactly the same thing – using aboriginals to make themselves look good. Thus it appears an ideological war is being fought in the Australian media scene between diversity true believers and the few remaining white soyboys who know they have to signal as hard as they can to keep their jobs.

It’s Bolshevik vs Menshevik. Fun to watch, especially if they ruin several careers and trigger a suicide or two. Ultimately the more rabid lefties will win and Australian media will be become more fake, gay and brown.