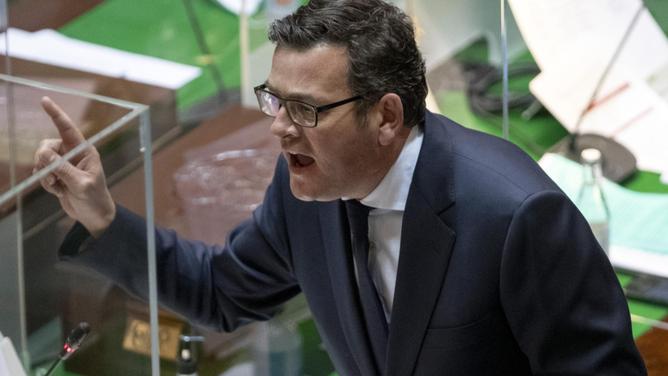 As the Victorian parliament prepares to make Dan Andrews Dictator for life, ordinary people of the State are preparing to stage yet another peaceful protest in an attempt to stop the inevitable.

Peaceful protests have completely and utterly failed. Everyone with critical thinking skills always knew they would. But they had to be held and the process of keeping the moral high ground had to be seen through and will have to continue to be seen through to its bitter and horrific end.

We all know what will eventually occur. The first rule of alternative media revolution club, though, is: don’t talk about revolution club. (That tends to lead to life in prison for incitement.)

If we were leftist, anarchist, communist scum, trying to deliberately destroy civilisation and everything good with the help of traitors in government, then risking prison by inciting or engaging in violence is fundamental to being part of the utopian cause. It’s also much less likely to result in life in prison, thanks to all of the allies they have in government, lying press and the judiciary. If, however, your goal is to save, preserve and rebuild your civilisation, then any premature acts of violence or calls for them, only aid the enemy in achieving the opposite. They also result in much harsher penalties by the same corrupt traitors in positions of power. Even calls for non violent civil disobedience, such as attending a protest during a lockdown, can see pregnant mothers’ houses raided by a dozen Goons and them being hauled off to the Gulag in chains. However, going to jail for non violent incitement’s to disobey fake laws are positive, as long as going to jail wasn’t the obvious objective of the act. Standing up for what you believe in has different optics to attention seeking.

So, the population and the alternative media, that give them a voice, appear hamstrung by ethics and laws that are one sidedly being used against us and we appear to hamstring ourselves by keeping our code of conduct pure, in the face of diabolical injustice and oppression.

Our society was built upon the foundations of Christianity and at the end of the day, we must relearn what those foundations are and hold firm to them. Violence, revolution, slaughter and even complete and utter genocide are not forbidden in the Bible. In fact they have been openly commanded by God and personally undertaken by God on a number of occasions. But there is a process. There is a time and a place. Every chance is given for evil doers to stop, repent and reform first. Every form of persuasion and peaceful pleas are exhausted whilst the Godly people simply continue not to yield. Continue to do what is right by God and refuse to submit to any act of man that requires subordination to evil.

Do not think, plan or encourage vengeance upon our enemies. Vengeance is the Lord’s and only the Lord’s. The majority of currently peaceful protestors, affected workers and family members of vaccine injured and killed, are not believing Christians. The Lord will use them as His tools at a time of His choosing. If we are called upon to commit violence ourselves, either in direct defence, or as a participant in bloody revolution, then God will make that abundantly clear to us when appropriate. The historical score card though, shows that the majority of the time the Lord only requires His people to come in afterwards and clean up the bloody mess. Unbelievers will likely slaughter their evil overlords as their material comforts and possessions are lost. There will likely be assassinations, mass arrests, mob uprisings and attempted coups. It’s likely going to get ugly.

So my advice is simply to be firmer in your resolve to not comply with any acts of submission, small or large. Active defiance and small tokens of minor sabotage are not forbidden in the good book. Hold the line, continue to hold the line and turn more and more to God each day. Strengthen your faith. Trust in the Lord’s justice. Your family are still alive and therefore you have no justification for taking a life.

You have not been physically assaulted therefore you cannot demand an eye for an eye that you still possess. You may care a bit too much about your physical possessions and so God may humble you with loss of income, reduction in quality of food and shelter for a while, until you put your faith back in Him completely. That faith will be rewarded in this life or/and in the next.

Peaceful protests will likely continue to fail. You should attend them anyway. Writing to your MP will likely achieve nothing, you should continue to write to them. Going into legal battles with your former employer after being let go for not giving up your bodily autonomy, will likely fail. You should pursue the process all the way to the High court regardless. With every failure the evil of our day comes closer to its demise. With every rejection of peaceful opposition comes the growing likelihood of complete and utter physical annihilation of our enemies and also of this civilisation that they rule and that we are a part of. This is the true meaning of “love thine enemies as thyself”. Do everything you can to avoid death and eternal damnation for them as you would for yourself. For by the time this has all played out, we truly will mourn for them and their folly as we would mourn for ourselves. We will know in our hearts that we loved them all as God loved them all. But we just couldn’t save them. They had turned away from God. They had turned to evil. They were all nothing more than everything we ourselves could become. Look into the mirror and see yourself. They are us, we are them. Repent. Love and fear the Lord. And praise Christ for your salvation.