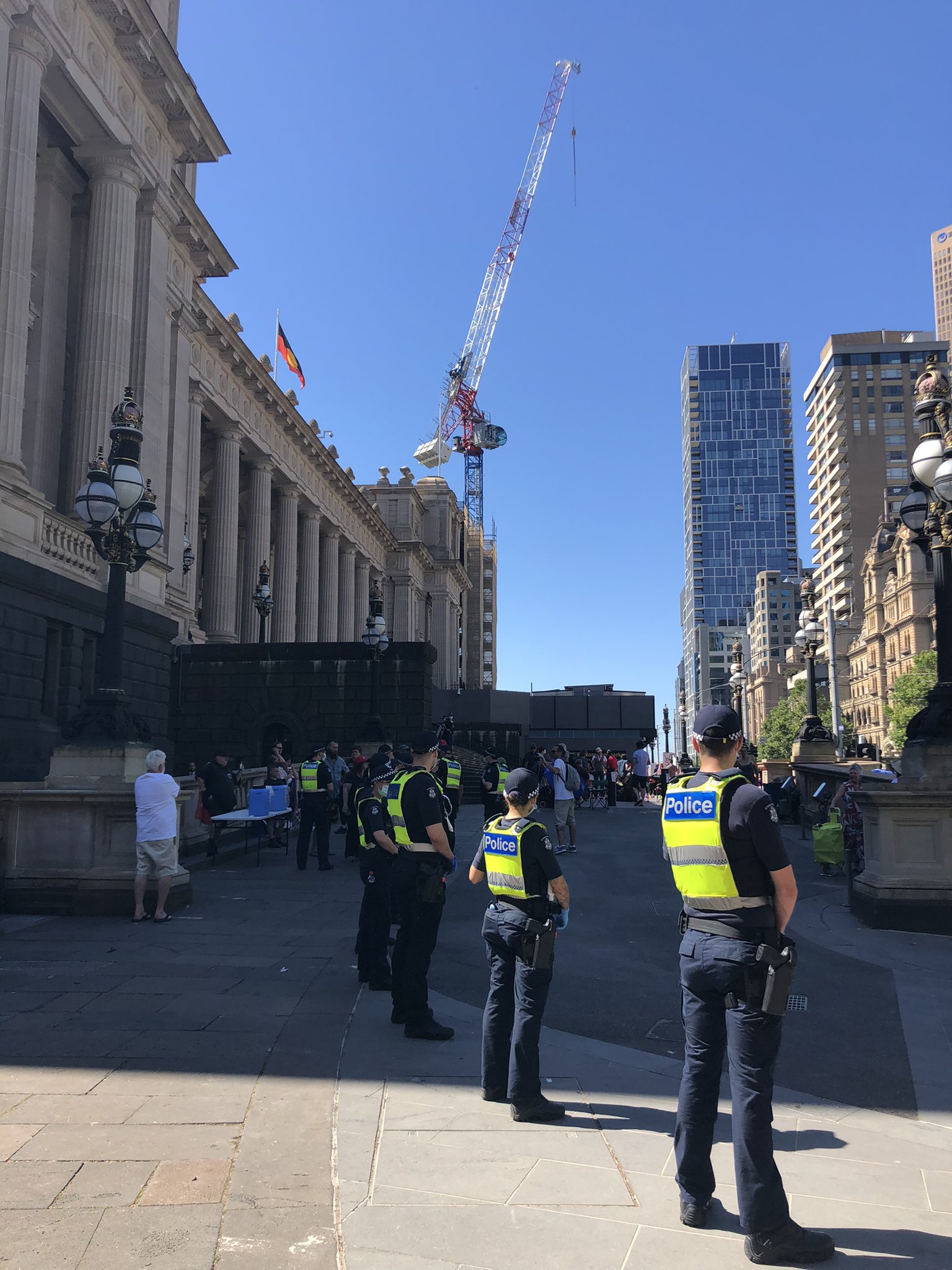 Look at all that democracy.

I am sure something like this has happened before. Parliament passes a bill, then police make a show of force at parliament. Just can’t quite put my finger on it:

Victoria Police officers have surrounded the perimeter of Parliament House ahead of the pandemic bill vote – where the legislation could pass through the upper house as soon as Tuesday after last-minute support from an independent MP.

Dozens of masked cops are monitoring a steady stream of protesters who have arrived to rally against the legislation.

The demonstration is expected to grow in the coming hours after it was revealed Transport Matters MP Rodney Barton decided to vote in favour of the bill after initially being against it.

Police stationed inside and outside Victoria’s parliament ahead of vote on government’s pandemic bill @SkyNewsAust pic.twitter.com/eAMiaIjfMT

Everything will be fine. This is good for democracy. It will keep us safe. For the greater good.

Mr Andrews said the Public Health and Wellbeing Amendment (Pandemic Management) Bill 2021 encompassed the “rules we need”, adding the emergence of Omicron highlighted the pandemic was not over.

“If we want to protect those who are not vaccinated, can’t get vaccinated, in aged care, have underlying health conditions – this is not over,” he said before walking into parliament.

Except, if the only people allowed to fly are the “fully vaccinated”, that means the so-called “Omicron variant” has spread via the fully vaccinated.

Mr Barton flipped after the Andrews government agreed to six amendments to the bill.

The biggest change is an independent panel to review appeals to detention under public health orders, that will strip control from the state government and chief health officer.

These are some of the weakest concessions I have ever seen. The idiot seems to believe that setting up a few committees is going to save us.

A new joint parliamentary committee will be formed to oversee public health orders.

The committee will need to have a minority of government MPs and headed by someone from the crossbench or the Opposition, to ensure it is separate from the government in charge.

The body can recommend against proposed pandemic orders but it will need to go through a disallowance motion where it then must pass in both the lower and upper house.

All Andrews has conceded here is to allow an Independent to put a little bit of red tape over a bill which still allows the Premier to declare a pandemic at will. We are supposed to believe that a committee headed by a crossbencher or member of the Opposition, whose “recommendations” must pass both houses of parliament in order to halt pandemic orders, is a protection. The fact that this bill will likely pass courtesy of a crossbencher in the first place demonstrates how useless this is. All the government needs to do to block committee recommendations is to make further meaningless concessions to another idiot crossbencher.

This is how dictatorships works. Bureaucracy does not provide representation to the people or provide protection from tyranny. Bureaucracy is essential for tyranny to function. It is purpose made to bog down any kind of pushback in a mindless web of overlapping and contradictory rules, regulations and paperwork. Meanwhile those in power just keep pushing their agenda with relentless fanaticism.

Furthermore, hundreds of thousands of Aussies have marched through Melbourne for weeks against this bill, but the government and media simply have worked in tandem to minimise and dismiss the genuine grievances of the people.

Ultimately, democracy itself does not work. It allows tyrants, cowards and incompetents to avoid responsibility for their actions by hiding behind the vote of the majority. It attracts psychopaths and midwits rather than genuine leaders.

It is refreshing that many purebloods understand that we cannot comply our way out of tyranny. The next step is to recognise that democracy, presented as the counter to tyranny, provides nothing of the sort.