Peter Grant has responded to my article that took issue with his thesis about South Africa and the Afrikaners. He disagrees with me which is fine. I am happy that he took the time and trouble to respond. It is through such dialogue that honest men can forge their opinions and ideas on matters of importance. And I consider Grant to be an honest man who is a fellow truth seeker. Which is why the tone of this article will be respectful.

Nevertheless, Grant is wrong. And he is not just wrong, but dangerously wrong.

I will not go into our differences regarding the historical background of South Africa as I consider it irrelevant for the topic of this article. But before I begin we need to examine a few of the passages that Grant wrote in order to obtain a clear understanding of where he stands on the issue of race and nationhood.

“Homogenous nations survive. Diverse nations perish.”  That’s a nice sound-bite . . . but how many homogenous nations have also perished, ground down beneath history’s inexorable onward march, or absorbed into a more powerful homogeneity that overwhelmed them and subsumed their culture into its own?  A hell of a lot of them have died like that.  Just look at most European nations today.  Besides, homogeneity can be measured in many ways.  Race is only one of them, and it’s of minimal importance compared to culture.

I never implied that homogenous nations survive indefinitely. As Zerohedge states, on a long enough timeline the survival rate for everyone and everything drops to zero. So to clarify my sound-bite, homogenous nations will survive far longer than diverse ones, and if a former homogenous nation becomes diverse it will perish within a few short generations.

Now to the crux of the matter, the idea that race is of minimal importance compared to culture. There is only one successful multicultural nation in the world, and its time in existence has been comparatively short. But its most successful leader stated the following:

Culture is race. I have written extensively about this before.

The sins of multiculturalism – Suffer the children

Culture is Race – The Doublethink

The most important idea in those articles is not that race and culture are inexorably entwined; rather, it is that the biological reality of race in entirely random. This is why it is so unpalatable for most people, particularly when we come from a relatively egalitarian culture that believes in the idea of merit.

Equally important is the ability to come to an understanding of the differences between macro and micro examinations of race, race relations and culture. The countless examples of plucky immigrants with skin tones not as ours who come to our nations and through hard work and effort rise to great heights, while admirable on an individual level are completely irrelevant when considering issues of race on a community level, let alone a national one.

Thus, Grant’s fantasies of if only a common South African culture had been promoted then things would have been different, are merely wishful thinking. This is not how the world works on a macro level.

Grant’s dismissal of my claim that the middle class is unique to the West because we have had only had it for several generations is also fallacious. He fails to consider the fact that the middle class grew out of the previous thousand years of Western history. It did not appear by magic, but instead was a product of our continued growth as a culture. It cannot be grafted artificially onto other cultures without the underlying foundation of consistent generational progress to sustain it. Which is why it is primarily an outcome of race. Blood doesn’t just matter – it counts for everything.

“Everything is downstream from biology and culture, in that order.”  Culture?  Yes, I’ll agree with that.  Biology?  Not so much.  The biological distinction between races is so tiny as to be infinitesimal.  The cultural differences matter far more, IMHO, and in the opinion of many who’ve studied the field in depth.  Race is only skin deep.  Culture is soul deep.

So Grant proposes that skin and soul are separable. Which doesn’t equate with the Bible and its constant telling of events linked to nations and chosen peoples. It is nonsensical at best but mostly I find it embarrassing that a Christian pastor would pronounce it as fact. It is flim-flam for feelings, and feelings don’t get you very far when things start going to hell. You might not be interested in race but race sure is interested in you.

I will leave aside the current explosion into the mainstream of the white hating critical race theory which is in the process of taking over large areas of American bureaucracy. To make my point, let us instead examine what happened in the USA when an actual calamity occurred and see if race is simply a social construct. How did the “culture” not the race of the nation stand up and deal with events when Hurricane Katrina hit New Orleans in 2005?

One black man, observing the chaos from abroad, took a different view. Leighton Levy wrote in the Sept. 2 Jamaica Star: “I am beginning to believe that black people, no matter where in the world they are, are cursed with a genetic predisposition to steal, murder, and create mayhem.” He wanted to know why there was no footage of white looters: “Is it that the media are not showing pictures of them looting and robbing? Or is it that they are too busy trying to stay alive, waiting to be rescued, and hiding from the blacks?”

There is no such thing as civic nationalism. There is no such thing as magic dirt. On a macro level, everything becomes tribal and that is entirely based on race. That article is a foretaste of what is to come in America when things really start hotting up. All that will count is your tribe. And your tribe is your nation, or at least, it should be. Because if it’s not then you’re in a tough spot. And if you’re a member of a minority tribe then you’re in a very tough spot indeed. If you import Africans then you will get Africa.

In Uganda I was a mazungu, and the locals never let me forget it. By my skin color I was known. But I was a visitor, and visitors leave. Invaders stay. On a micro level they are absorbed. But on a macro level it always ends badly, for everyone concerned. The Afrikaners were in a fight to the death, and they knew it. For various reasons, they lost. Instead of disparaging and dismissing them as simple racists who got what they deserved, we should instead learn from their tragic example. In the end when a race war goes down, all that counts is to be on the winning team. 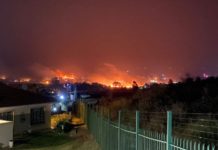