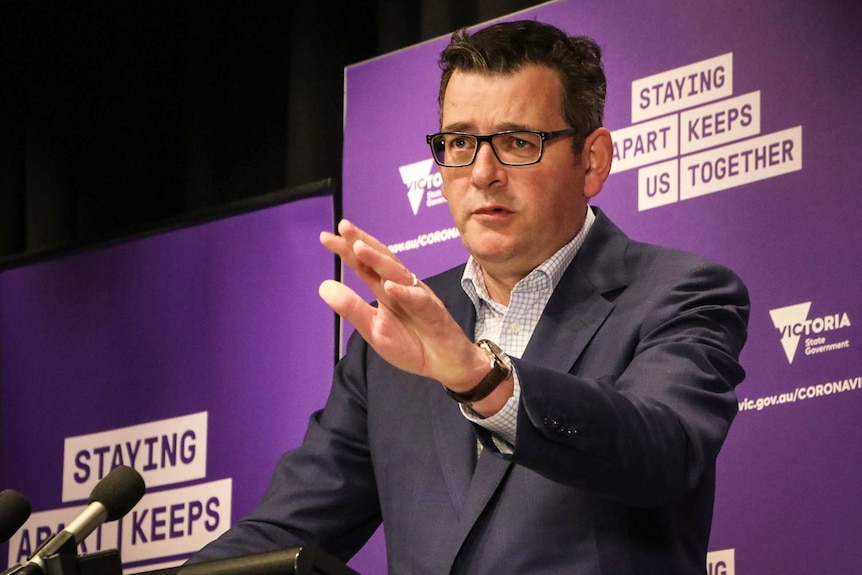 Victorian Premier Daniel Andrews has made a dramatic return to politics after three weeks away from the limelight after falling down the stairs which totally wasn’t suss in the slightest. A snap press conference has just concluded, organised with so little notice that only The XYZ was able to attend.

As such, we had exclusive access to comments from Premier Andrews:

“Good evening everybody. I must say that while I enjoyed some time away from the cameras after falling down the stairs and and disappearing for three weeks which totally wasn’t suss at all, I am very disappointed by what I have seen in Melbourne in the few hours since my return.

“People look relaxed, I see children playing, families are hugging their grandparents, people are walking around without face masks even though nobody has died of coronavirus in Victoria for months.

“This is totally unacceptable.

“I haven’t spent hours at press conferences every day for a year just for Victorians to assume they can get back to living their lives they way they used to in my absence. My subjects must be kept constantly on edge, we must always find creative and ingenious methods by which we can undermine the peasants’ sense of reality, by constantly making something the opposite of what it used to be.

“This is why we cancelled Anzac Day, it’s why we make you kneel at the footy, it’s why we support changing the date of Australia Day. The less your current reality looks like the life you grew up with, the more detached from reality you become. This collapses the will to resist of the majority of citizens, and the few that remain are easy to herd into death camps, sorry I meant holiday camps.

“It is thus with great pride that I can announce that the sexist and racist anachronism which a small fringe of extremists refer to as “Easter” will no longer constitute a public holiday in Victoria.

“I believe this decision reflects the the diversity of modern Victoria. I would like to reinforce my government’s commitment to engineering a progressive and inclusive society.”

For some reason, when Daniel Andrews referred to his falling down the stairs, he put both hands up and wiggled his index and middle fingers. We don’t know what this means.