A stir has been caused by the publication of the following image by an official Chinese government Twitter account: 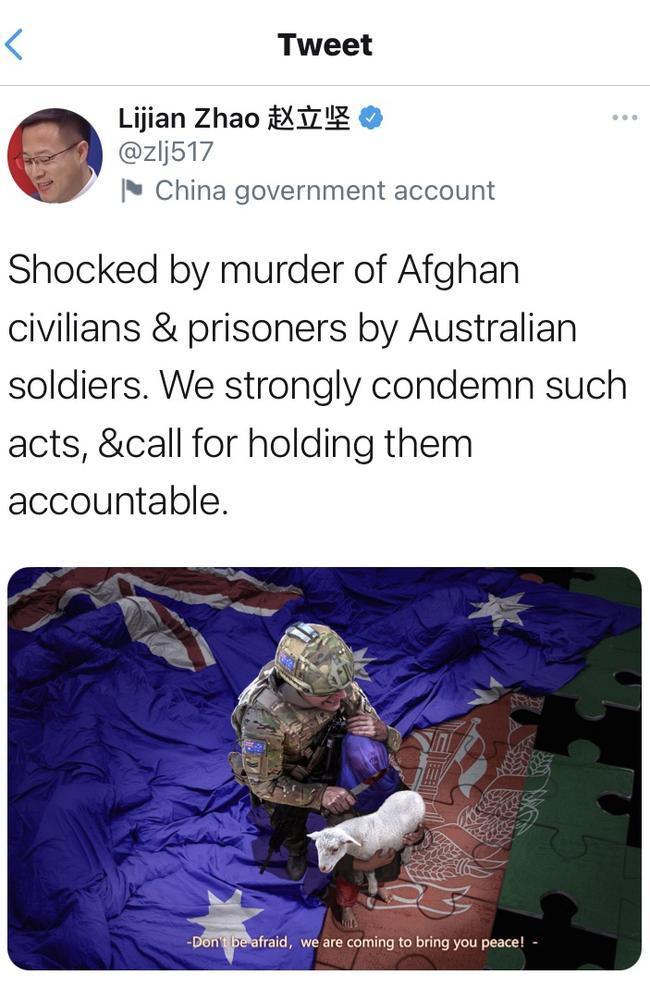 The only thing it’s missing is a Jewish banker crouching behind the Aussie soldier. Australia’s daggy dad cuck Prime Minister, Scott Morrison, has sprung into action at the chance to look like he actually represents Australians:

Prime Minister Scott Morrison has demanded an apology after a fake image of an Australian soldier threatening a child with a knife was posted on an official Chinese Government Twitter account. pic.twitter.com/NB5ZBD8XJr

“It is a terrible slur on our great defence forces and the men and women who’ve served in that uniform.”

What the bloody hell did you think was going to happen, ScoMo? You did this. You allowed the betrayal and public humiliation of our hardest men, out best soldiers, when you allowed the ridiculous inquiry to take place into non-existent war crimes for their service to our country in the War on Terror. Of course Australia’s enemies are going to exploit this to further depleat our fighting capabilities.

After Israel did 9/11 in 2001 and Australian forces joined America in the War on Terror, the doomsday scenario of muslim terrorists getting hold of nuclear, biological of chemical weapons, weapons of mass destruction, and unleashing them on a Western city became the pretext for sending our boys into the meat grinder of the Middle East. It also became the justification for bending the rules of polite warfare and giving our warriors a freer reign in order to get the job done.

In essence, the logic was that terrorists are not real soldiers, so you’re allowed to torture them. A lot of articles went back and forth in the media at the time parsing the various outcomes of this logic. 20 years later and Cultural Marxists have spread their octopus tentacles all the way to the top of the Australian Defence Forces. Somebody has to take the fall for all the bending of the rules, so it’s the men who were told they could do everything necessary to prevent a mushroom cloud over Melbourne who have to take the fall.

This can be framed into a wider narrative of how evil Australia used to be back when we were all white people. It’s a win-win for the globalists. Except they fail to take the following into account:

As preciously mentioned, Australia’s enemies are making the most of Australia’s unnecessary self flagellation, putting out hypocritical statements condemning Australian soldiers’ actions. This is designed to weaken the prestige and morale of Australia’s warriors.

The reason this is so effective is that it was our warriors’ leaders who made this attack possible. Australia’s political leaders have blatantly betrayed our best troops.

How do you think our troops feel about our political leaders right now?

What do you think will happen the next time they’re asked to go to a foreign shithole to do nasty things to keep Aussies safe?

How do you think Real Australians feel about this? We remember the early naughties very well, and we don’t react too kindly to this level of betrayal of our boys.

Furthermore, as stated previously, if the West was really serious about defeating islamic terror, all we had to do was expel every muslim from our lands and nuke the entire Middle East. Instead we sent our troops into messy conflicts and imported millions more muslims here. Now islamic terror is part and parcel of everyday life in the West.

Finally, how are we supposed to take worsening relations with the Chinese government and the potential of conflict with China seriously when our government imports so many Chinese people here, tells us they are just as Australian as us and punishes us for daring to suggest otherwise.

What do you think will happen if the Australian government goes to war with the Chinese government? I for one will fight for my people, but not for my government. A lot of Real Australians feel exactly the same way. Most Chinese people living here do too.

ScoMo huffs and puffs about a tweet, but he has left Australia utterly defenceless.