When the credits rolled on The Australian Dream after its premiere at the Melbourne International Film Festival, it was met with a 10-minute standing ovation.

In Soviet Melbourne nobody is prepared to be the first one to stop clapping.

The documentary uses the experiences of former AFL player Adam Goodes to examine racial politics in Australia and is one of the best-reviewed, most-publicised Australian films of 2019.

The entire arts and media establishment in Australia are a bunch of wankers, and our film industry is full of AIDS. Australian movies are universally awful because of said wankers.

Jump a few weeks ahead to when the film opens in Australia and it ranks 12th at the box office on opening weekend.

Australia’s arts and media establishment are a tiny, unrepresentative clique of wankers who openly despise the Australian people and everything we stand for, and we’ll be buggered if we are going to pay to sit through the crap those wankers produce.

Don’t expect accountability, though, only excuses:

Box office earnings never define a film but it’s still a loose measure of the public’s interest in a topic, especially if it’s a documentary.

A lot of variables factor into what people decide to see at the cinema, made trickier by the dominance of streaming services and the comfort of home, but many local filmgoers were not eager for The Australian Dream.

So you’re saying we’re all glued to our iPads?

The most obvious justification to this is people want escapism when they go to the movies. True, the dominant films at the Australian box office now are Once Upon a Time in Hollywood, The Lion King and Fast and Furious Presents: Hobbs and Shaw.

Even the Australian film Palm Beach, which was met with mostly negative reviews, earnt over $3 million after being in cinemas for three weeks.

The Australian Dream had a chance to connect with a big audience. Goodes has a profile as one of Australia’s great sportsmen. He’s a multiple Brownlow medallist and an Australian of the Year — the man needs no introduction.

The author is begging the question, “why did a movie with a big name star fail so miserably?”

It’s because he’s a wanker.

Adam Goodes told real Australians “just remember whose land you’re on”, he called the Australian Constitution “racist“, he internationally humiliated a teenage girl who called him a mean word, and he danced an aggressive so-called “war dance” at opposing fans who were expressing their displeasure at his cheating. He was quite rightly booed into retirement, and this film is just the latest attempt by our parasitical elite to control the narrative regarding that recent period of history when middle Australia told the wanker to shove it.

But don’t let facts get in the way of more excuses:

Another complication is the presence of the first documentary about Goodes to come out this year: The Final Quarter. The film debuted at the Sydney Film Festival in June before airing on Channel 10 to an audience of over half a million.

There’s room for both films but it brings into question the appetite for stories that make racism in Australia the focus. We’ll watch multiple variations of the same comic book movie formula each year but we’ve only got time for one Goodes documentary.

One of the locations where The Australian Dream performed best was Cinema Nova in Carlton, Melbourne. Talking to IF Magazine, general manager Kristian Connelly said it was a sign of the mindset of their patrons.

“That indicates that progressive audiences are receptive to the film and its message of the racial prejudice shown towards Adam Goodes,” he said.

Cinema Nova is located within crawling distance from Melbourne University. The only people who go there are communist wankers.

As always with these ABC propaganda pieces produced with our stolen taxes, the point is the same: Anti-white hate propaganda.

“I feel it is only appropriate to consider that the lack of enthusiasm shown the film in some markets is very likely to be due to a resistance to engage with a message that will be, for many, uncomfortable viewing.”

Australian history provides no comfort, but we get caught up on colonial myths. The poor turnout for The Australian Dream is like a denial detector.

Oh for goodness sake. It always comes back to this. The term “denial” is a trigger word due to its association with so-called “holocaust denial”, and it is designed to make us shut up. They always bring it back to the holocaust. It’s just so tiresome.

Thank goodness this next passage, with my favourite excuse of the piece, lightened the mood for me. I was about to throw out all my soap again:

In The Australian Dream there’s a moment where an Indigenous man tells Goodes certain messages can only get through when people are willing to listen. Even critics who gave positive reviews did make the film a challenge to sell to audiences with praise like “2019’s most essential movie”. Statements like “powerful” and “must see” are often vague descriptors that don’t always engage with the issues at play in any film.

Even when talking positively about Indigenous stories and art, there’s a condescending way Australian critics engage with the themes under the guise of an ally.

The preachy tone of the conversation around The Australian Dream from the media made it sound too much like homework. The more you tell people they must act, the more likely they’ll resist every urge to do so; Australians have always been prone to rebellion.

The sad thing is, Australia could have great films, great film makers and a thriving film industry which doesn’t need any help from the Australian taxpayer. Simply tap into the genuine popularity of sport in Australia and its role in shaping the identity of our people as a nation distinct from our British brothers. There are so many great footballers whose stories are crying out for great movies to be made about them. Consider the up and down fortunes of the Australian cricket team since the retirement of our greats in the years preceding the 2005 Ashes loss. The struggles our cricketers have faced demonstrate just how good our cricket teams under Border, Taylor, Waugh and Ponting really were. The career of Shane Warne, the greatest Australian cricketer since Donald Bradman, is still in recent living memory.

Yet aside from made-for-TV docos our film makers won’t go near anything like this. Instead our film industry’s enforced obsession with elevating sanctified “minorities” and demonising traditional Australia leaves our stories untold on the big screen. This is entirely deliberate.  Telling stories about ourselves is how we keep our people alive. Our chosen film makers don’t want to tell real Australians stories that build us up and celebrate our history, because they hate Australia and they hate our people and they are doing everything in their power to destroy Australia and destroy us.

The Australian film industry must die, and the day will come when they pay for their treason. 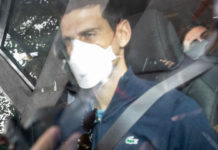