During World War Two, while the Yanks and the Japs were wasting time fighting each other when they should have together crushed the Soviet Union, they gave primitive Melanesian people a bit of a culture shock. To the average American grunt, a DC-3 represented food, ammo and possibly a letter from home. To the average Pacific Islander, a DC-3 was a massive bird which appeared out of the heavens to deliver free stuff from their dead ancestors.

When the war ended, the free stuff ended. Cargo Cults formed in response, building mock aeroplanes, airfields and control towers, as well as imitating the drills and dress of American soldiers, in the belief that enacting such rituals would bring back the free stuff from heaven.

As is clear from the somewhat indecipherable introduction in the wikipedia article on the subject, sociologists and anthropologists have struggled to frame this in a Marxist context. An anti-Christian will claim that Cargo Cults are a contemporary example of how all religions start, while an historian with his eyes open will present the cargo cult phenomenon as a possible source for ancient myths in South America about bearded white men who once ruled over them.

But one thing we can be sure of; this would never happen here in the modern, educated, progressive West.

Nike latest cuck repeats far left feminist talking points on perceived and invented double standards regarding the treatment of women, while ignoring the fact that traditional masculinity is literally defined as “toxic”.

It is also the epitome of the Cargo Cult of Women’s Sport. An entire fake industry has been created which centres on telling women that they can and should play sport just as well as men, that female sport is just as important as male sport, and that it is just as popular. Reality has proved the opposite, hence the mystical belief, put forward in this ad, that we only need to change the way people think for female athletes to achieve the same prestige as men.

The media, crony capitalists, advertisers and sporting administrations are working furiously to propagate this myth.

This fits the globalist pattern of inverting traditional values. Men channel their natural aggression and display their strength and power through sport, so women who have been brainwashed to want to be like men do the same. This cargo cult has been stretched so far that photographers highlight the strength and power of female athletes, rather than traditionally feminine characteristics, believing this will help them finally achieve the same recognition as sportsmen. The idea that men and women are biological different, want different things and generally fulfil different but complementary roles in society is deliberately marginalised.

The assumption appears to be that we only need to create the same system for female sport as exists for the men, equal pay with the men, the same exposure and profile as the men, and people will flock to it. As stated, cargo cult. Male sport, ie, sport, is more popular than female sport because it is objectively better.

However, the globalist media-advertiser-sporting administration complex are all too happy to attempt this Orwellian programming.

Equality has been installed at the Lord’s Cricket Ground, with the women’s game given its rightful place at the home of cricket.

Previously only those achievements in the Test format were recorded, with the venue yet to host to a women’s Test match.

The update to the honours boards is both overdue and welcome recognition for Australian cricketers, Cathryn Fitzpatrick and Lisa Keightley.

Keightley scored 113 not out to become the first female to register a century in an ODI at Lord’s.

Fitzpatrick — who was recently inducted into Australian Cricket’s Hall of Fame — was the first female player to claim an ODI five-wicket haul (5/47) at the venue.

Their achievements came in the same match against England in 1998.

Equality has been enforced.

This summer, ABC radio would regularly inform listeners that Australia was currently playing New Zealand in a One Dayer, only to reveal 10 or 15 seconds into the report that it was a women’s match when they mentioned the players’ first names. It also regularly puts women’s cricket and AFL results at the front of a news bulletin.

Here “Australia vs New Zealand” at the WACA. And somewhere in Adelaide. It’s glorified school cricket. There is nobody there.

Here is an AFLW match played yesterday, on a Saturday night at Princess Park between Carlton and Collingwood:

Here is a practice match played between Carlton and Essendon at the same venue two nights before, ie, on a week night:

A practice match on a Thursday night featuring a side which won two matches last year attracts a bigger crowd than a women’s match between Carlton and Collingwood, whom this Fox Sports article hilariously describes as “rivals”. The men of Carlton and Collingwood played off in some of the most memorable Grand Finals of the 1970’s and 80’s. Put the respective guernseys on two teams of women, and apparently they inherit that legendary rivalry.

No worse cultural appropriation of the sporting achievements of men can be found than in referring to women’s cricket matches between Australia and England as “The Ashes”. Here is a Cricket Australia Facebook post referring to the “Men’s Ashes”: 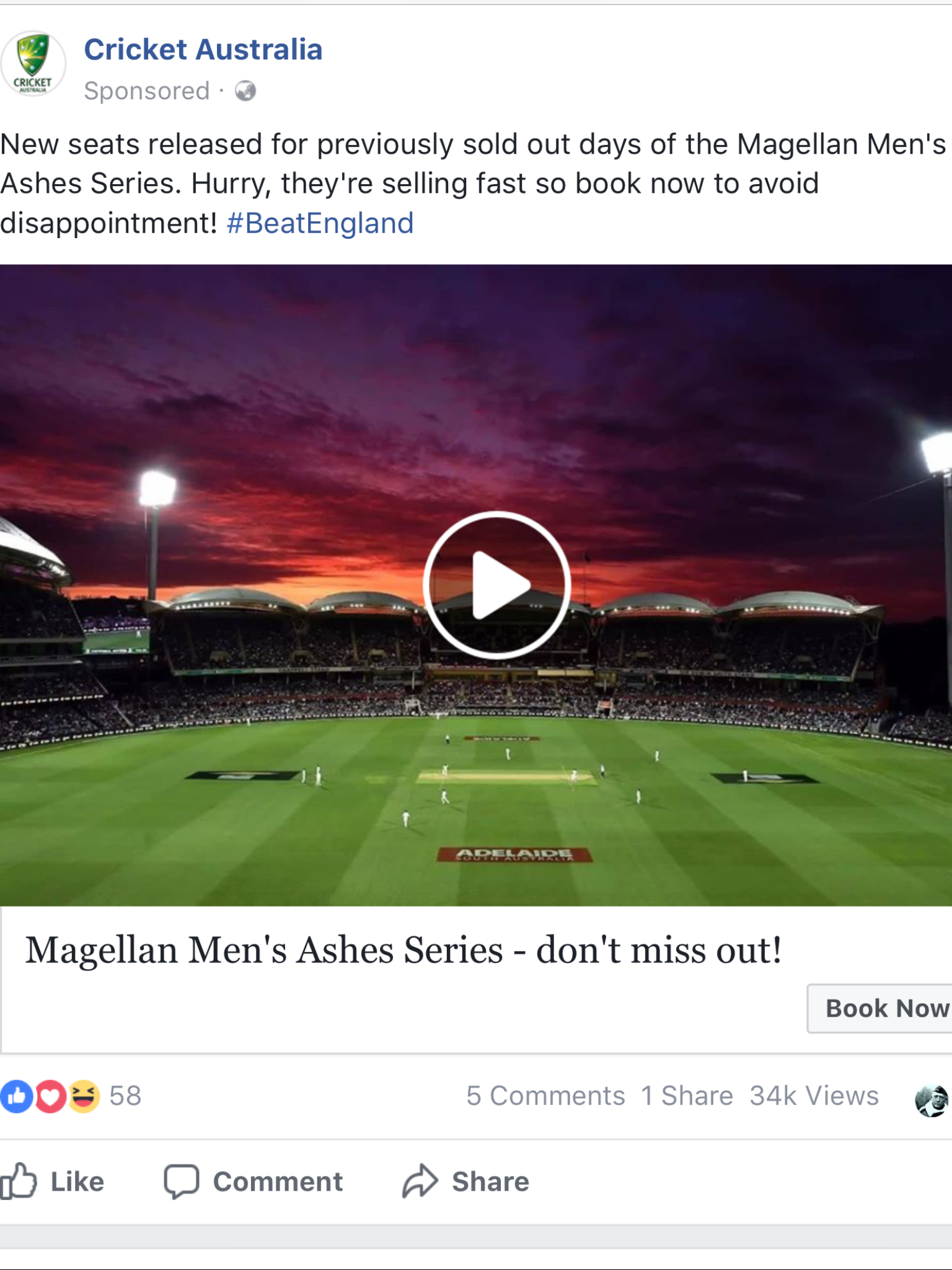 There is only one Ashes, despite what they will try to tell you: 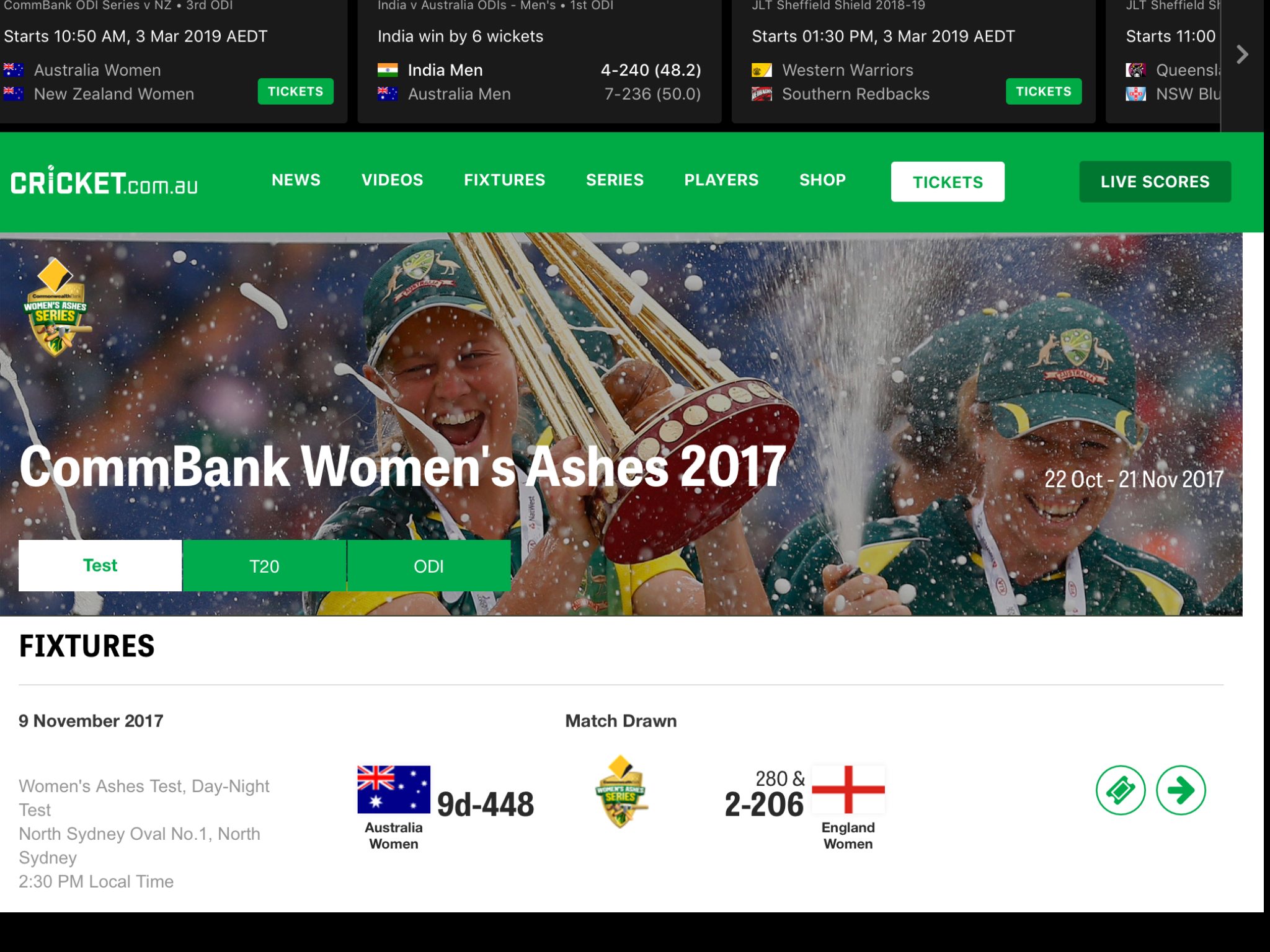 This gets us to the heart of the matter.

The Ashes series between Australia and England became part of the narrative of how we as Australians developed a national character distinct from our British homeland. It was only a game, but it mattered enough to the Poms that they burned the stumps used during the match when we finally beat them, and they developed a brutal strategy – Bodyline – to defeat the greatest cricket who ever lived, the Australian Don Bradman. It mattered enough to us Aussies that this caused a diplomatic incident and a change in the rules. Thus the Ashes are a ritual which both reinforces the brotherly bond between England and Australia and our distinct national identities. This ritual is repeated twice every four years by the young men who have inherited the game from their forefathers.

The fact that it is men who engage in this ritual is important, because it is young men who go to war.

In a healthy society with a strong sense of ethnic and national identity, with clear and enforced boundaries between itself and the other, sport plays a crucial role in channelling the aggression and the national and tribal loyalty of young men into a peaceful reenactment of war. Rugby is essentially two shield walls crashing into each other. Cricket and baseball requires men to smash the missiles their opponents hurl at their bodies. Shooting, fencing, wrestling, the javelin, horse riding, boxing and martial arts hone the skills of a warrior.

Sport is a way for young men to train for war. It develops the personal bonds, teamwork and tactics, and respect for hierarchy based on skill and experience which exist in a strong army. We reward sportsmen for their bravery as we reward war heroes. The people of a country, a region or suburb of a city barrack for their home side and generally share a genetic and cultural bond with the players of their respective teams.

Sports stars serve as role models, often imperfect, on which boys and young men model their own masculinity.

The critique from the right, of “sportsball” being a distraction from the task of defending our people against real enemies, of channelling our sense of self-worth into the achievements of others rather than ourselves, has much validity, especially in the current year. The far left have marched through practically every institution in the country; a twin debt and housing apocalypse loom just over the horizon; both sides of politics support flooding our country with hundreds of thousands of foreigners every year; and thus our people are being steadily and systematically replaced. Now is the time to forgo some simple pleasures of European civilisation and prepare to defend it against enemies within and without.

But the far left understands the importance of sport as an expression of the culture of a people, in training young men for war, and reinforcing national identity. That is why the far left has tried so hard to subvert it. They have hijacked sport just as they have hijacked music, art, film and television, because they understand its importance in telling the history of our people to ourselves, in transmitting this to the next generation, and in maintaining our ability and the will to defend ourselves and secure the existence of our people.

The globalist hijacking of sport is both a symptom of the emasculation and marginalisation of white men, and a weapon with which to carry out white genocide.

That is why we must fight to defend it.

And besides. What else are we gonna do on the weekend.