The hijacking of the Commonwealth Games in Queensland by communist activists who want more gibs has continued, with a rabble of about 50 invading what is still the white paradise of the Gold Coast to take advantage of white man technology to promote their cause. From the Daily Mail:

“A beach-side television broadcast has been interrupted by Aboriginal land rights protesters.

The large crowd of about 50 rowdy demonstrators chanted, waved flags and hurled abuse during a Sunrise segment being filmed on the Gold Coast.”

The pretext for spreading communist propaganda was that Sunrise hosted a “discussion” they didn’t like:

“Some of the protesters attacked host Sam Armytage, demanding she apologise for her controversial adoption discussion last month.

‘Always was, always will be Aboriginal land,’ the demonstrators shouted, along with ‘Sam Armytage, we are still waiting on an apology.’

The XYZ is unaware if any communist activists have self-harmed due to this “controversial adoption discussion”. We’re pretty sure if you asked the good people from Coopers Brewery what they thought of they matter, they’d tell you they just don’t care any more.

“As the hosts attempted to shrug off the demonstration and highlight the positive aspects of the Games, protesters continued target them.

‘Sam if you don’t say sorry, we’re going to write a letter and get you sacked and Ernie Dingo is taking your job,’ one man said to Armytage directly, News.com.au reported.

‘Shame on Scumrise,’ said another.”

The use of the expression “Stolenwealth Games” is another great example of this. The Empire Games were renamed the Commonwealth Games to make empire sound nicer. Stuff that. The empire did nothing wrong.

The communist behind much of the subversion is one Ruby Wharton.

“..a young school student who made news two years ago [2012] when she burned the Australian flag outside Parliament House”.

The Guardian doesn’t mention it, but Socialist Alliance flagship Green Left Weekly informs us that Ruby Wharton is a member of Warriors of the Aboriginal Resistance (WAR). You might remember that mob from Melbourne a few months back:

Like all good communists, they are a little less than prudent with other people’s money.  “Anti Fascist Action Sydney” is even spruiking for them: 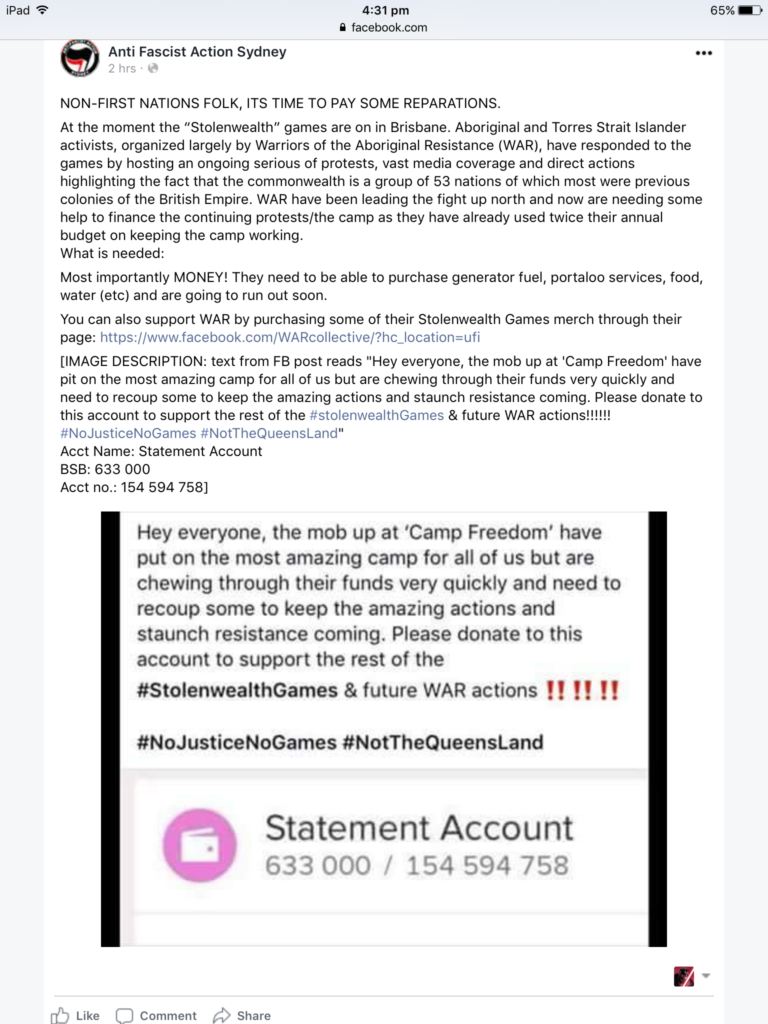 Anecdotally, someone mentioned to me recently that “a wise Asian friend” told them:

“To promote Australia you need to tell everybody that it is civilised, modern and safe, primitive black people in make up will scare tourists off”.

These communists should be aware that they are in a unique, unsustainable period, in which the rulers (for now) of this land have surrendered their moral authority to rule, and thus allow this sort of nonsense to occur. They should bear in mind that the people replacing us will soon rule us, as they are prepared to do what it takes to win, and will not stand for their nonsense one they have power.