Two years ago on the Easter long weekend thousands of ordinary Australians took to the streets to give those who love our country a voice.

In sixteen different towns and cities, mums and dads, grandparents and kids joined together under our nation’s flag. They joined to send a message to those in power. To tell those who think Australia begins and ends in inner city Melbourne and Sydney that the patriotic suburban and rural people they sneer at as “bogans” weren’t going to have their concerns ignored anymore.

They marched with heads held high and pride in their hearts. They sang and cheered and waved our nation’s flag. People who had never been involved in anything political, people who had never attended any demonstration before, people normally ignored by those in power and whose voices never make the ABC, joined together to try and make the powerful listen.

They were motivated by many issues, but one reason was at the front of most of the Reclaimers’ minds. That cause was resistance to mass Islamic immigration and the associated spectres of sharia law, halal certification and Islamic extremism that come with it.

The extreme left never knew what hit them. You can go back and read their publications and their social media posts at the time and sense their shock. On that day in April at every protest outside Melbourne the far-left had been outnumbered, shouted down and humiliated. For people used to being able to dominate the public square with impunity it was an outrageous experience.

Communists and Anarchists know that they will never be able to win seats in parliament or take government democratically; their political strength is entirely bound up in their infiltration of institutions and their ability to outnumber and intimidate anyone who disagrees with them on the streets. Without their threats of mob violence [implied or otherwise] the far left is unable to force businesses to fire people for having the wrong opinions, they are unable to decide who gets to speak and who gets has to pay $50,000 dollars for the privilege, in short, their power is gone.

When they were outnumbered in every city and town outside their southern heartland it terrified them. In the subsequent protests they fell into frantic activity to make sure that such a thing wouldn’t happen again, but outside of Melbourne they found that most mainstream leftists aren’t interested in protesting ordinary, proud suburban Aussies waving Australian flags no matter how loudly you call them Nazis.

As the initial buzz wore off and the momentum of the Reclaim rallies stalled the left were again able to regain their numerical advantage in most major cities, but the marching mums and dads had done something that hadn’t been done for a long time. It showed that even though they are far better organised and disciplined, the far-left has nowhere near the numbers that they like you to think they do. When it comes right down to it there are many, many more of us than them.

Reclaim Australia needs to be celebrated because it showed that even without any organisation, the spirit of this country survives in its people. The reason why the extreme-left were so shocked and alarmed by the number of Reclaimers was that there was no real organisation behind the rallies at all.

Far-left activists work every day to mobilise and recruit people for demonstrations and activism. They put an immense amount of individual and collective effort into getting people onto the streets in order to present both the public and their base with an image of strength. The fact that disorganised mums and dads with no activist history and a few Facebook e-celebs could so wrong foot them was a wakeup call and a shock to their systems. Any long-time observer of the extreme left has seen the subsequent ramping up of their rhetoric and the seemingly feverish increase in violence at their events. 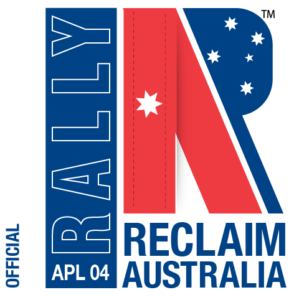 Reclaim Australia was special because it had no organisational core but it collapsed for the same reason. The German Communist theorist Rosa Luxemburg [before she tried to overthrow the government and ended up in a canal] postulated that there are two types of politics, the spontaneous and the organised, and that these two types must work together for any political movement to be successful. The Reclaimers were almost a textbook example of the former without any of the latter at all. In a way this helped as it gave the leftist media fewer targets to attack and left them figuratively punching fog. In another way it almost guaranteed that after the initial explosion of activity the movement would fall into infighting and personality conflicts which terminally sapped its momentum.

We need to celebrate Reclaim Australia because it led to a national awakening in right-of-centre politics that continues to this day. It’s hard for new people to understand just how barren the decade before the birth of the patriot movement was for those of us to the right of the Liberal Party.

Today we take it for granted that Pauline Hanson would get 14% of the vote in QLD and are almost disappointed it wasn’t more. Today we don’t even ask the question of whether a party to the right of the Coalition is possible but discuss which party it will be. Today we don’t even find it particularly noteworthy that even in “Red” Melbourne last month, paying attendees at the Milo Yianopolous event came out in their thousands and outnumbered the rioting extreme-left counter-protesters five to one.

This moment in time, this momentum towards national awakening, began with the patriot movement. It began with ordinary people standing up for their country, their culture and themselves. It began with Reclaimers taking to the streets to show their pride even if it meant being spat on, punched and kicked by the most degenerate anti-Australian scum in our society.

Don’t mourn that the moment of Reclaim Australia is over; there will be another moment and another movement like it. Celebrate that it happened at all and organise to make sure that the next time our nation has a “Reclaim moment” it turns into a tsunami that not only scares the anti-Australian traitors living amongst us, but washes them and their self-hating ideologies away for good.

After all, there are many, many more of us than them. If we get even half as organised as they are they won’t have a chance in hell.