Bill Cosby has today walked free after a jury failed to reach a verdict and the presiding judge declared a mistrial. I don’t really have a dog in this fight, but when it comes to the response of ugly Lena Dunham on Twitter, I do. She launched a series of tweets: 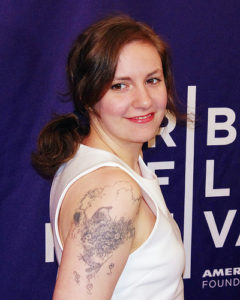 “Bill Cosby’s trial is about much more than Bill Cosby.”

“When women see justice served, their own fear & trauma are eased.”

“When they don’t, survivors of sexual assault have to watch every day as the legal system calls them liars and denies their truth. It is an unimaginable grind.”

“My heart is with every survivor reliving the erasure of their own experience today.”

“I see you. I love you. P.S. It’s okay to check out of the news and honor yourself today. Do whatever you need to feel whole.”

The world of feminism is replete with hypocrisy, and Lena Dunham is but the latest incarnation. Truth Revolt have documented this hypocrisy in great detail:

“In her newly published collection of personal essays, Not That Kind of Girl, Lena Dunham describes experimenting sexually with her younger sister Grace, whom she says she attempted to persuade to kiss her using “anything a sexual predator might do.” In one particularly unsettling passage, Dunham experimented with her six-year younger sister’s vagina. “This was within the spectrum of things I did,” she writes.

“Do we all have uteruses?” I asked my mother when I was seven.

“Yes,” she told me. “We’re born with them, and with all our eggs, but they start out very small. And they aren’t ready to make babies until we’re older.” I look at my sister, now a slim, tough one-year-old, and at her tiny belly. I imagined her eggs inside her, like the sack of spider eggs in Charlotte’s Web, and her uterus, the size of a thimble.

“One day, as I sat in our driveway in Long Island playing with blocks and buckets, my curiosity got the best of me. Grace was sitting up, babbling and smiling, and I leaned down between her legs and carefully spread open her vagina. She didn’t resist and when I saw what was inside I shrieked.

“My mother came running. “Mama, Mama! Grace has something in there!”

“My mother didn’t bother asking why I had opened Grace’s vagina. This was within the spectrum of things I did. She just got on her knees and looked for herself. It quickly became apparent that Grace had stuffed six or seven pebbles in there. My mother removed them patiently while Grace cackled, thrilled that her prank had been a success.”

To paraphrase Lena Dunham, if I believed in hell Lena Dunham would be going there.