Be it Christmas, capitalism, freedom of the press or the freedom to drink and party, since September 11th 2001 radical Islam has been at war with the West’s people, values and symbols. Politicians and the media may have forgotten, or may be unwilling to tell that story but the victims and the perpetrators sure haven’t forgotten. And until the attack is met head on with a serious political and military response, the war will continue and civilians of the Western world will be the victims. 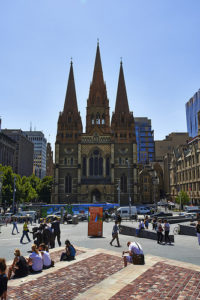 That’s why it should come as no surprise that seven potential terrorists were arrested on Thursday for allegedly conspiring to commit a terrorist attack on Christmas Day in Melbourne. It also shouldn’t be surprising that the alleged terrorists were from Middle Eastern backgrounds. The sad thing is… I was surprised. I was surprised by the truck attack in Nice on Bastille Day and the truck attack in Berlin at a Christmas Market. All attacks made by Middle Eastern terrorists on civilian targets.

Because bombs aren’t dropped overhead daily, major cities aren’t wiped out and we don’t have to contend with war rations, it can be easy to forget that we are at war. Inasmuch as the nature of war changed between the trenches of Gallipoli in the 1910s to the jungle warfare of Vietnam in the 1970s, the nature of war has changed again. Our enemy doesn’t wear a uniform, doesn’t have a flag and is aided by our ever-shrinking attention span.

It feels redundant to even say this in some ways. This isn’t new information. We’ve known this since 2001, when the war against us started. Be it civilians living our day to day lives, taking the trains or buses, going to a café for a drink or trying to buy our loved ones a gift at a Christmas market. We are the target.

So if you were surprised by these attacks like I was, don’t be. Pericles is quoted as saying: