Sorry kids, you’ll need to go around to the side exit if you want to enter your nation’s parliament, the home of your democracy, built and funded by your parents and grand-parents taxes. 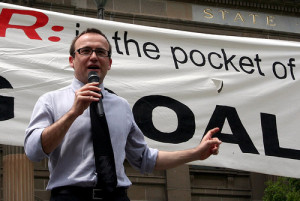 who helped stage a juvenile sit in that blocked access to Australia’s parliament house for over an hour, don’t really care how far you’ve traveled on your school excursion to observe your representatives at work in the people’s house. They’re so much more important than you. You can wait. Be a good boy and girl now, and stand in line over there will you.

Frustrated teachers can at least be glad that things aren’t as bad as a few years ago when Union thugs and other malcontents kicked in the glass doors because they didn’t agree with the result of an election, such is their contempt for their fellow Australians. Such is the contempt for others, like you boys and girls on your visit to Canberra, of the Greens.

One of them, Adam Bandt, sat cross legged on the marble floor like the child-politician he is, with a smug grin on his self entitled face, whilst you waited outside, refusing anyone else access to the nation’s parliament and hindering hundreds of others from going about their lawful business. He couldn’t care less if you, or anyone else, were inconvenienced. So do remember that won’t you, boys and girls, when it comes time for you to vote.