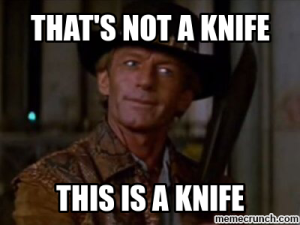 The despondent journalists at the Australian National Broadcaster have not had much material to work with when it comes to pouring scorn and contempt on the racist bogans whom they imagine populate the suburbs of Australian cities. There was not an anti-Muslim backlash in sight after the Paris attacks, not even an invented one, like the pitiful ‪#‎Illridewithyou‬ hashtag campaign (actually hoax).

But just as all seemed lost, and even as the Grand Mufti was comparing himself to the Son of God, along came one right wing nutter to provide the much awaited headline that would seem to verify what the cultural elites always knew – the public were barely literate racists. So it came as no surprise to read that the right wing anti-Islamic protesters planning to hit Melton (an otherwise unremarkable outer suburb of Melbourne) with a demonstration this weekend were armed to the hilt and dangerous. Or so the breathless headlines and media comment suggested. Here at last was the black heart of racist Australia. Or so the ABC and fellow travelers wanted to believe.

Just as we were being led to picture hordes of neo-Nazis storming the… well, a building in Melton of some description… chanting racist slogans and brandishing AK-47s, the somewhat less dramatic truth emerged – in the small print of course. The armed and dangerous ‘neo-Nazis’ keen to inflict violence on the Islamic community as imagined by the “progressive” media, actually surmounted to one renegade member of a nationalist group, arrested last week without incident. The group concerned promptly cancelled the guy’s membership. After an extensive police search the bomb squad came away disappointed. He was found to be in possession of five tasers, pleaded guilty, said sorry to his mum, and copped thirty days in the big house.

Now, this correspondent can’t claim any expertise when it comes to contemporary weaponry and small arms, but I’m willing to bet a few tasers stashed under the bed of a thirty something misfit still domiciled in his parents house is not quite in the same league as cells of Islamic fanatics armed with assault rifles, grenades, and sporting the very latest line in suicide vests as fashion accessories. One guy with a taser, even five tasers, just doesn’t seem to do it for me, insofar as the threat of imminent anti-Islamic violent perpetuated by armed ‘neo-Nazi’ thugs goes, especially when compared to the threat posed by actual (Islamic) terrorists. It’s a bit like bringing a knife to a gunfight, or facing off against a machete wielding Mick ‘Crocodile’ Dundee with a switchblade.

But the ABC and fellow travelers need not despair. The “Islamophobia” register is up and running, and somewhere across the great southern land it’s pretty certain a Muslim citizen had their feelings hurt by someone, somewhere, even if no taser was involved.