In the week since the Paris Terror Attack II, the “progressive” narrative, which has been building since Julian Burnside claimed that Islamophobia poses a greater danger than terrorism, has gone into overdrive, with everyone from Waleed Aly to the Grand Mufti to little known blogger, Steve Gray, effectively saying that Islamic terror attacks are the fault of the West, and more specifically, the fault of those on the right opposed to Islam. 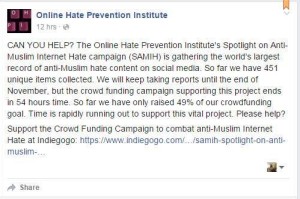 Amongst this guff, (see what we did there, Steve Gray,) one can add the rather over-officiously and slightly audaciously named Online Hate Prevention Institute.  The delightful fellows at OHPI appear obsessed with every “progressive’s” favourite passtime, the subtle art of speech suppression.  Our good friends at Islamodacity alerted us to a campaign they are running, which you can view in the featured image.

Islamodacity have summed it up well:

“Disgusting, inappropriate, callous, disingenuous are all words that come to mind when reading this post from the Online Hate Prevention Institute… Even after the Paris attacks this vigilante group that self determines hate is rallying their troops to raise money for their “anti-muslim-hate” campaign. This leaves us sick in the stomach…

“We encourage you to go to their page and let them know, that given the current events, you find them distasteful and inappropriate and you are very offended as it’s like a middle finger to the people that lost their lives in Paris.”

We heartily agree.  Who knows, you may even get the honour of being added to the list.