“Islam has nothing to do with Islam.”

You might have heard this rather sarcastic phrase. Despite its cynicism, it is however, a phrase that sums up rather well the presentation of Islam by our media and political leaders.

You might have also noticed that Islam most often has nothing to do with Islam when violence is involved.

Indeed, how could it when Islam is the “religion of peace”?

Islam has nothing to do with Islam even when people state clearly that their actions are motivated and acted on behalf of Islam and its interests.

The media tells us this, 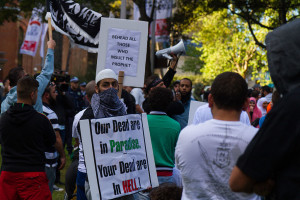 as it did yesterday in relation to a knife wielding attacker in Melbourne who claimed to be the “prophet of Islam.” But the authorities reassured us that the attack had nothing to do with religion or politics. The man was simply suffering from mental issues.

The same was said during the Sydney siege last year, where two Australians were left dead after Man Haron Monis took a shop full of hostages at gun point and forced them to hold an Islamic flag up to the window. Again, politicians and Islamic leaders were at pains to tell us that these actions had nothing to do with Islam. And this despite Monis’ being a self proclaimed imam with thousands of online followers soaking up his hate preaching. He of course had nothing to do with Islam.

When Muslims protest, as they have done in Europe and Australia, wielding placards that state “behead those who insult the prophet Mohammed”, that too has nothing to do with Islam.

We also can’t forget the Islamic State. The ISIS/ISIL has nothing to do with Islam, we are reassured by President Barrack Obama and world leaders. They simply believe in a ‘distorted’ and corrupt form of the religion of peace. Never mind the fact that ISIS closely emulate the life and teaching of Mohammed. But then again, perhaps Mohammed and all his warring, slaving and slaughter has nothing to do with Islam.

So you see, Islam has nothing to do with Islam.