The United Nations and the European Union have spent a lot of time lecturing mainly western nations, together with those member states in central Europe, on the need to accept more and more Syrian refugees. Most reasonable people are well aware that the Assad regime, together with the savages calling themselves Islamic State, have made much of Syria an apocalyptic wasteland, if not something resembling a Medieval vision of hell. Most reasonable people would, then, understand why the innocent population caught up in this horror might well want to flee Syria, and would consider it right for their government to offer sanctuary, and the chance of a new life, to people in this situation. This is, generally, the narrative being perpetuated by stern faced diplomats, a willing media, and the self-appointed guardians of public morality, around the western world. If it were true, one would have little argument with it. But is it true? Here are seven questions about the European immigration crisis that remain largely unanswered, if not actively ignored, by those running the prevailing narrative, and pursuing the UN / EU agenda for mass resettlement. Isn’t it about time that those telling us we need to open our hearts, and our borders, started answering questions like this, and stopped shouting down those asking them as racists and bigots? So here we go…

1. Why are so many of the Syrian “refugees” not actually Syrian? Reports based on the EU’s own numbers show that as many as four out of five claiming to be refugees fleeing the civil war in Syria are not actually Syrian (http://www.dailymail.co.uk/…/Number-refugees-arriving-Europ…).

2. Why are the vast majority young men? Surely men, fleeing their homes in fear of their lives, would be taking their loved ones with them? The men I know would be. So why are these men leaving their wives and children, and parents and grandparents, at home in the war zone? How can one with a straight face possibly claim that a group of many thousands made up almost entirely of young men are genuinely representative of a civilian population fleeing their home town in fear of their lives?

3. How can it be that is safe to return to the place you fled from? The world was stunned, and shocked, by images of a drowned toddler on a Turkish beach, and further shocked that the child’s father turned out to be the captain of the ill-fated people smuggling boat. As sad and as tragic as it was, the narrative that he and his family were fleeing persecution, and certain death, in Kobane Syria, was made a complete mockery of when he returned to Kobane Syria within days to bury his lost family. 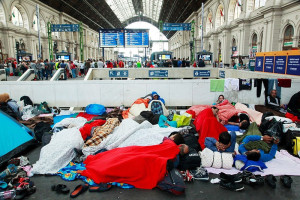 4. The very definition of a refugee is one who must flee their home country for the next safe place of sanctuary (http://www.unhcr.org/pages/49c3646c125.html). Turkey is an eminently safe nation. So too is Greece, as is Macedonia, ditto Romania. Bulgaria is not bad either, and Italy, Hungary, Slovenia and Slovakia all tick a lot of boxes. Austria is a veritable paradise compared to many other parts of the world, inclusive of Syria. So why would genuine refugees, fleeing persecution in a land thousands of miles away, cross multiple borders all over Asia Minor and eastern Europe, if not in order to reach a destination of choice, where the land is flowing with welfare milk and honey? Surely, at any common sense level, this makes them economic migrants not refugees? So why go on insisting they are refugees? Unless you are wanting to preserve a fiction and perpetuate a lie?

5. Why is it that only European and other western nations are being lectured by the UN and EU about accepting their “fair share” of these economic migrants? How many have Saudi Arabia, Bahrain, Qatar, Kuwait, the UAE, and the other Gulf States accepted? Surely the largely Muslim people fleeing Syria would be more comfortable, and assimilate more readily, into nations that already share their language and faith. The Gulf States are generally not short of a dollar either, and might easily match the welfare bonanza on offer in places like Germany and Sweden. So why aren’t the Gulf States helping? And why has the world’s media, perversely, singled out as not doing enough among all of the States of the Middle East, Israel? (http://www.latimes.com/…/la-fg-syrian-refugees-israel-20150…).

6. Why only the west? If it’s good enough for people who don’t speak a word of Swedish to be resettled in Sweden, or somewhere else in northern Europe for that matter, then why not Japan, or South Korea, or somewhere else in south east Asia? How many migrants did Iran, China, Mexico, Argentina, or Russia accept in the last year. Why is it only the western nations who are given the UN / EU guilt treatment?

7. How many among those claiming to be refugees are attracted to, or committed to, the expression of Islam favoured by Islamic State? How many want to see sharia law imposed on the country in which they are ultimately settled? How many are hardened jihadist’s already? How many are radicalised? How many will become radicalised in their country of settlement? What percentage is too high a risk? Can a western nations tolerate 1%, 2% or up to 10% of those resettled being sympathisers with Islamic State ? How many street shootings and random beheadings are we willing to accept by sighing and reminding ourselves it’s only a tiny unrepresentative minority? There are uncomfortable questions, but it is simply not good enough to refuse to answer and hope for the best. Our children and grandchildren deserve better.

Personally I would happily, and I do mean happily, welcome and embrace genuine refugees, fleeing genuine persecution, into my own country, and I fully support my government in doing so. But I will not be lectured to by a corrupt organisation like the United Nations, or the po-faced career bureaucrats of the European Union, about who and what a refugee is. Especially when the evidence is staring at you in face that the vast majority of those masquerading as Syrian refugees are opportunists, in search of a better life. And good luck to them for desiring and wanting better. But let’s not maintain the patent fiction of calling them refugees and giving them a free pass to the west ahead of countless other genuine refugees languishing in camps all over the world, when they are clearly not. Not only is that wrong, it is inherently immoral.

Until such time as these seven question can be adequately answered, I will not, and do not, support the mass resettlement of economic migrants using the Syrian conflict as a pretext for forced resettlement in the west.

Source: Four out of five migrants are NOT from Syria