The most cruel, barbaric, immoral and hateful thing you could possibly do to an aboriginal or a White person is to promote policies that would lead to their people going extinct or being erased in whole or in part. Antiwhites who shout ‘Racist’ the loudest are also the ones who want to erase aboriginals with Multiculturalism and mass third world immigration. They know that aboriginals only make up 3.3% of Australia so their policies to replace, erase, and destroy White children actually erase aboriginals first. The antiwhite sees the elimination of aboriginals as collateral damage in their war against White children.

It is very important for Antiwhites to try to trick aboriginals into being on their side against White people. They have to convince them that you don’t have to be black to be an aboriginal to delay the day that aboriginals notice what’s going on. When they realise that they will go white before they go extinct, the game will be over for the fake ‘aboriginal allies’. 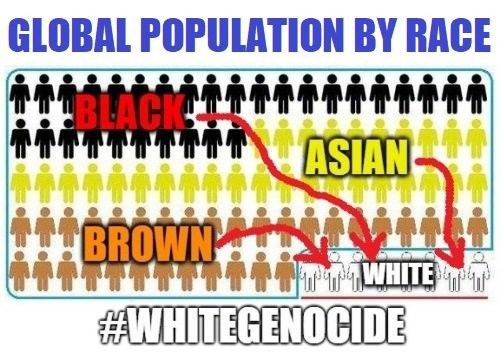 Here is an aboriginal at the Melbourne Comedy Festival who realises that White people are a global minority and she thinks it’s funny to call for our genocide because leftards came up with the word POC to describe nonwhites. Steph Tisdell is heavily promoted by the ABC. She still doesn’t get the fact that aboriginals are going extinct first due to their tiny population and lack of self discipline in the face of Multiculturalism.

It’s changed even recently. Now the politically correct term is to say “people of colour”. Again, I understand that, I will answer to that. P.O.C. Poc, weirdly sounds offensive. “You’re a poc, f—- you, like, y’know.

But here’s the thing as well right, I think there’s something so fucked up about how vague that is, ‘cause now we’ve grouped the world into White and nonwhite, and that feels f—-ed. ‘Cause I’m going to tell you something’s gonna f—- ya, right.

Across the world, White people, absolute minority. And if you wanna start grouping us all together as P.O.C. as poc, I’ll tell you what, we’re gonna rise up, get redy for the fucken apocalypse.

Yeah we’ll poc ya up. You gave us f—-en smallpox, we big f—-en pocs now fuckers.

When you meet an establishment drone, be they Cuckservative or Leftard, especially the ones who took an experimental vaccine because an authority figure told them to, keep in mind that these people are dangerous. They are establishment conformists. The old hippy term was ‘authoritarian’. The Milgrim experiment concluded that 65% of the population will conform to authority and commit murder or genocide if instructed to by an authority figure.

XYZ.net.au is the home of the free thinkers. We have a great responsibility to not only counter establishment propaganda and policies that promote the erasure of aboriginals and White people from Australia but we have to be aware that at some stage we will be the moral authority, so our policies must be well thought out when the 65% conformists join our ranks.