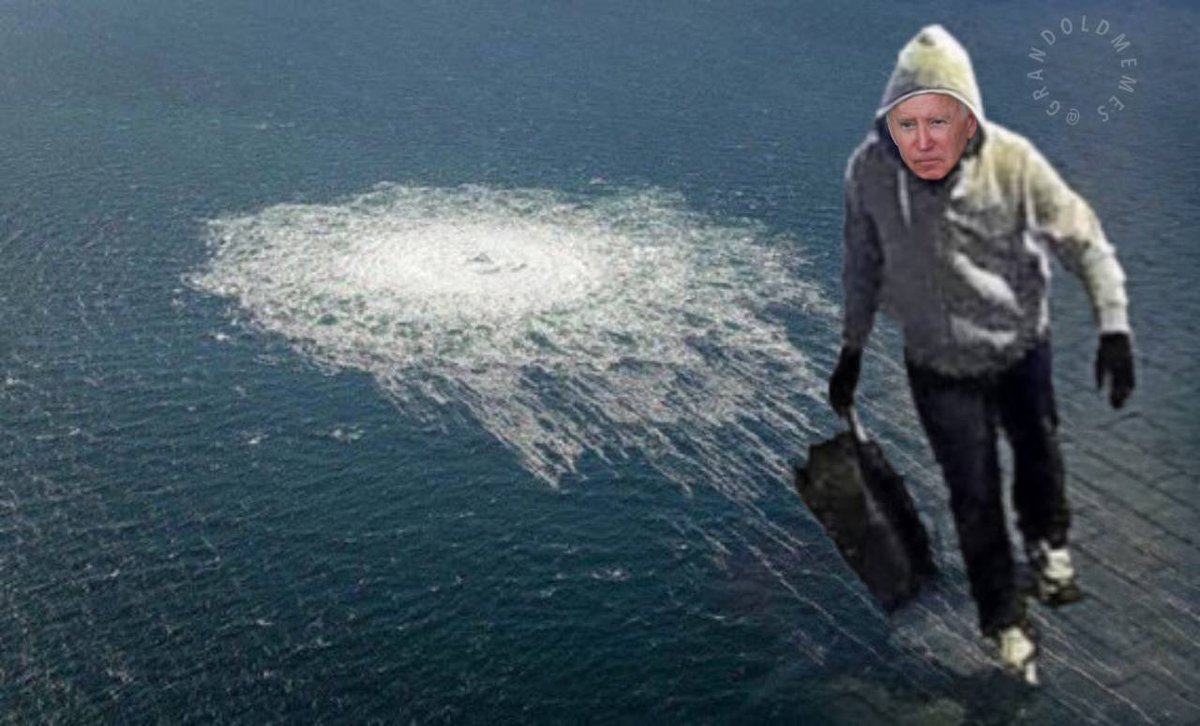 If you want to blame Russia, you have to ask why would Russia do it. The Nord Stream pipeline is a carrot and stick. If Russia gets what it wants, it can give Europe more gas, if not then the pipeline requires more … maintenance.

The two Nord Stream gas pipelines linking Russia and Europe have been hit by unexplained leaks, raising suspicions of sabotage.

The pipelines have been at the centre of geopolitical tensions in recent months as Russia cut gas supplies to Europe in suspected retaliation against Western sanctions following its invasion of Ukraine.

While the pipelines, which are operated by a consortium majority-owned by Russian gas giant Gazprom, are not currently in operation, they still contain gas.

The leaks occurred in underwater sections of the pipelines in the Baltic Sea.

Sweden’s Prime Minister Magdalena Andersson said on Tuesday that two blasts had been detected in relation to the leaks of the Nord Stream pipelines with information suggesting likely sabotage, though this did not represent an attack on Sweden.

Ms Andersson told a news conference the Swedish government was in close contact with partners such as NATO and neighbours such as Denmark and Germany concerning the developments.

“We have Swedish intelligence, but we have also received information in our contacts with Denmark, and based on this concluded that this is probably a deliberate act. It is probably a matter of sabotage,” Ms Andersson said.

“It is not a matter of an attack on Swedish or Danish territory. But that said, the government is taking what happened very seriously, not the least in light of the current security situation on our close proximity,” she added.

Sweden’s Maritime Authority issued a warning about two leaks in the Nord Stream 1 pipeline, the day after a leak on the nearby Nord Stream 2 pipeline was discovered that prompted Denmark to restrict shipping and impose a small no fly zone. 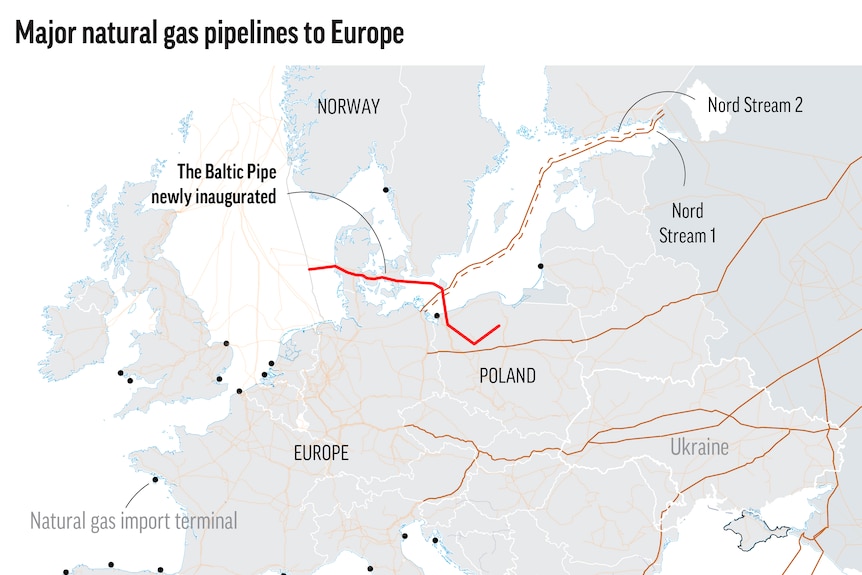 Russia said sabotage was a possibility and that the incident undermined the continent’s energy security.

A senior Ukrainian official called it a Russian attack to destabilise Europe, without giving proof.

Not sure how the editor let that one through. In the mainstream Lying Press the phrase “without giving proof” serves the same purpose as “baseless accusation” and “dangerous conspiracy theories”. They’re essentially accusing the Ukrainian official of lying.

The Danish Ministry of Climate, Energy and Utilities said it was too early to determine the cause, but Denmark’s Prime Minister Mette Frederiksen said sabotage could not be ruled out.

“We are talking about three leaks with some distance between them, and that’s why it is hard to imagine that it is a coincidence,” she said.

Russia said it was “extremely concerned” about the situation.

Kremlin spokesman Dmitry Peskov said at the moment “it is impossible to exclude any options” when asked whether it could be an act of sabotage.

Everybody is saying this is deliberate. Vox Day has shared an article pointing out:

“Such an attack on the seabed would be anything but trivial; it would have to be carried out with special forces – for example, by navy divers or a submarine, people informed of initial assessments said.”

The only question is who did it. Brandon’s threat in January this year is doing the rounds: 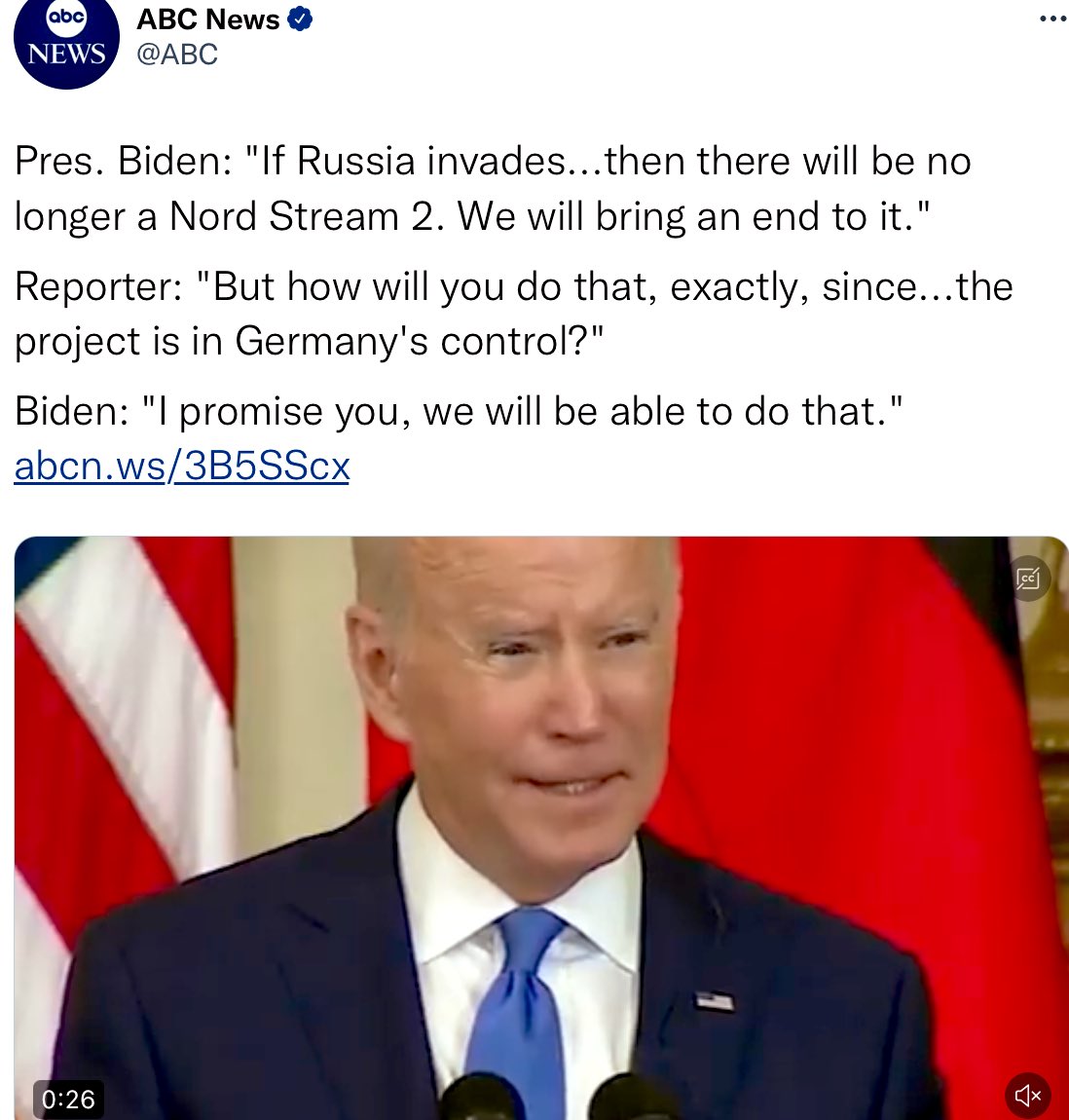 It goes deeper, as Adam Piggott recently pointed out:

“All of these and other factors will have the desired effect of propping up the tottering US economy for another five to six years. In other words, for the USA to continue to act as a giant global parasite, it has unfortunately run out of third world states to invade and must instead turn to destroying Europe in order to save itself.”

I would repeat my own assessment that this takes away Russia’s carrot and stick. Think of it like the Canadian trucker blockade. The Canadian government sent in the army and shut down the financial services of those involved. Yet its own Covid restrictions were having similar logistical effects to a blockade, as supplies lines were stretched and inflation increased.

The same principle applies to the Nordstream pipeline. Hungary is working toward a referendum on the sanctions against Russia with the aim of removing them. If other countries follow it would constitute a surrender to Russia. Removing Russia’s control over Nord Stream takes away its bargaining chip and leaves Europe with no option but to go all the way with the USA.

The American government has a history of manipulating events in order to intervene in the affairs of Europe. The sinking of the Lusitania was a clear false flag, while the attack on Pearl Harbour at the very least proved convenient.

However, this Nordstream attack does not necessarily mean World War III.