This is the attitude of all great leaders towards their followers.

It is also the exact opposite of how leaders of the Republican Party think and feel.

Look at the difference in Republican outrage over yesterday’s FBI search of Donald Trump’s palace Mar-a-Lago, vs. the diabolical travesty that was the verdict in the federal trial of Travis and Greg McMichael.

What happened to Trump is no different than what has happened to hundreds of other White Americans, who are better people than Trump, under Merrick Garland’s Jewish reign of terror.  Trump himself betrayed and abandoned the martyrs and prisoners of January 6th, and in the absence of unified leadership their legal defense and fight for justice has collapsed into a disorganized rout.

Meanwhile, FOX News hosts and Republican Party leaders were full of outrage and bluster last night, thundering about how Biden’s Justice Department is “criminalizing dissent,” while Trump himself complained about the “weaponization of the Justice system” by Democrats.  No kidding!  This fact has only been excruciatingly evident to about a hundred million oppressed White Americans for the past two years.

Meanwhile, neither Trump nor any other blowhards on FOX or cowardly Republican officials had two words to spare for the McMichaels.  What happened yesterday was a travesty of historic proportions:  the father and son pair, after having already been sentenced to life imprisonment with no possibility of parole plus 20 years by a Georgia court earlier this year, were each sentenced again to an additional life term by a federal court for hate crimes.

And in a ruling that can only be described as a deliberate attempt to inflict cruel and unusual punishment on the prisoners, George W. Bush-appointed U.S. District Judge Lisa Godbey Wood rejected the McMichael’s guilty plea in the federal trial just so that the father and son would be forced to suffer racial abuse and torture in Georgia’s notorious state prison system.  This fact was not lost on hundreds of anti-White commenters on YouTube and Twitter, who openly relished the prospect.

Of course, the McMichael’s verdict comes only days after another Republican-appointed judge in Akron drastically lowered the bail for the Blacks who murdered White high school honor student Ethan Liming.  The contrast between the cases of Ahmaud Arbery and Ethan Liming couldn’t be more stark:  Arbery was shot in a clear case of self-defense as he attempted to wrest the gun away from Travis McMichael, who was attempting to stop a burglary.  Liming, on the other hand, was brutally beaten to death after attempting to break up a fight.  Even the White man who filmed the Arbery incident was sentenced to multiple life terms, while the three Black murderers of Liming will likely not see ten years behind bars between them.

No defense by Trump or any Republican leaders or FOX News hosts for the McMichaels.  Trump himself set the tone early on by publicly throwing them under the bus and siding with the family of Arbery.

There was also barely any reaction from Republicans or FOX News hosts to the outrageous sentence handed down this week to 49-year-old Texas dad Guy Reffitt, a January 6th prisoner whose own son was groomed by the FBI to testify against him.  Reffitt was sentenced to over seven years in prison, despite the fact that he never even enteredthe Capitol building!  As Reffitt’s wife courageously pointed out, the verdict in her husband’s case was determined by the fact that Guy refused to take a plea deal, and the Justice Department is punishing him for his adherence to his political beliefs and refusal to compromise.

Trump did nothing to defend Guy Reffitt, he said nothing about the trial, at the same time he sided with the media-driven lynch mob against Travis and Greg McMichael and said not a word about the brutal anti-White killing of Ethan Liming.  Republican Party leaders and the disgustingly overpaid talking heads of conservative media followed suit.

Just as with social media censorship, neither Trump nor any of his sycophants in the establishment GOP give a whit about the rights of ordinary White people being trampled, or the murder, torture and abuse being heaped on thousands of White people every day.  Like the corrupt and greedy Scottish nobles portrayed in Mel Gibson’s “Braveheart,” they take the attitude that the oppressed masses of White America exist for the sole purpose of giving Trump and other Republican leaders power, position and privilege. 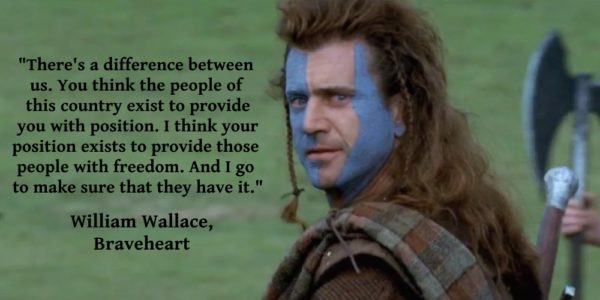 As long as Republican leaders will not fight just as vigorously for the “little people” being ground down under the iron heel of Garland’s Jewish tyranny as for billionaires and celebrities, they are unworthy of the loyalty and support of all decent White Americans.

If we have no leaders in the two-party system willing to stand up for those Whites without power, wealth and connections being targeted by Jewish tyranny, then we must lead ourselves.