Honestly, who writes this? 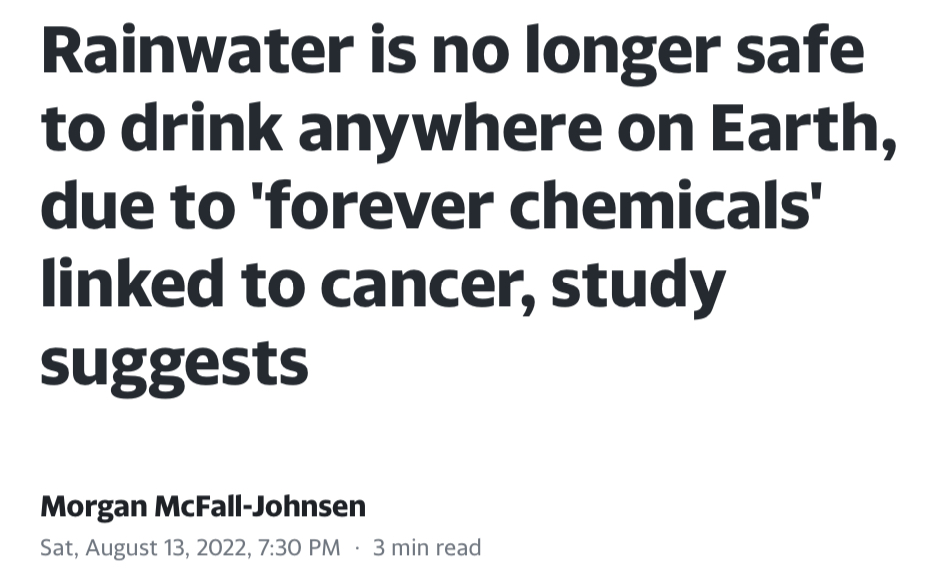 Rainwater is no longer safe to drink anywhere on Earth by US contamination guidelines, according to a team of environmental scientists.

That’s because rainwater across the planet now contains hazardous chemicals called per- and polyfluoroalkyl substances (PFAS). In a paper published in the journal Environmental Science & Technology on August 2, researchers at University of Stockholm, which has been studying PFAS for a decade, found evidence that these substances have spread throughout the entire atmosphere, leaving no place untouched.

There are thousands of PFAS, all human-made, used in food packaging, water-repellant clothing, furniture, carpets, nonstick coating on pots and pans, fire-extinguishing foams, electronics, and some shampoos and cosmetics. During manufacturing and daily use, they can be released into the air. They also leach into ocean water and get aerosolized in sea spray. From there, they spread through the atmosphere and fall back to Earth in rain.

The rain is poison. Don’t open your mouth and stick out your tongue next time it starts to drizzle. You could die, in like, 40 years or something.

They’re often called “forever chemicals” because they linger for a long time without breaking down, allowing them to build up in people, animals, and environments.

PFAS have been found in Antarctica and in Arctic sea ice. Their prevalence across the planet is a hazard to human health, since peer-reviewed studies have linked them to some cancers, decreased fertility, reduced vaccine response, high cholesterol, and developmental delays in children.

Brought to you by the same people who brought you “two weeks to flatten the curve”.

This stuff is totally unreadable, and utterly bonkers. Like telling us that homegrown eggs are full of lead and the introduction of CBDC’s, the intent is to reduce our independence from the grid and lock us into the system.

The globalists want us completely dependent upon government. They are planning to herd us all into 500 metre high mega cities where we are not allowed to drive and our every move will be monitored by AI.

If they succeed, Western humanity will be divided between the bug eating pod dwellers of these spaceship prisons and those of us who managed to get out.

It has become the norm to demand that government provides a solution to our every need, and for governments to promise they can deliver. In reality they are planning hell on earth. Bear in mind that during the Holodomor they had to post guards at cemeteries.

Personally I am looking forward to being so busy raising my chickens, hunting kangaroos and tending my crops that I have no time to check my social media feed.