Peter Fitzsimons, aka Pirate Pete, is a White Liberal who betrays his people for cold hard cash. Jacinta Price is a mostly aboriginal, genuine aboriginal nationalist who explicitly represents the will of her people.

This threatens Pete’s grift, as he exploits the poverty of aboriginals and allies with white City aboriginals to control the institutions and the dominant Narrative. Thus it is unsurprising that he has gone after her so hard:

Indigenous senator Jacinta Nampijinpa Price has lashed out at Peter FitzSimons, accusing him of being “very bloody aggressive” during a phone interview for a newspaper story.

The Country Liberal Party Senator said in a now-deleted Facebook post the Sydney Morning Herald journalist and columnist accused her of “giving racists a voice”. FitzSimons denies the claims.

Regardless of who said what, this is essentially true. The antiwhite globalist establishment of city aboriginals, White Liberals and jews is using aboriginal identity politics to destroy Australian culture, take complete power over every aspect of Australian life and deracinate both Australians and aborigines.

Although Jacinta Price does not represent White Australians, in genuinely representing the interests of her people she distinguishes aborigines from Australians, and offers a way in which we can approach the issue as two distinct peoples negotiating with each other from a point of mutual respect.

Globalists view any distinction between different ethnicities or races as “racism”, because they want to mix everyone together into a slave race… well, all except one. Hence, Pirate Pete is essentially correct but for the wrong reason. Price directly challenges his globalist proclivities:

“I don’t know if I’d do another interview with the bloke again. He accused me of giving racists a voice but that wasn’t printed,” part of her post, shared after the interview was published, read.

The post was removed on Sunday evening, according to The Australian.

It appears this was because Pirate Pete chucked a hissy fit: 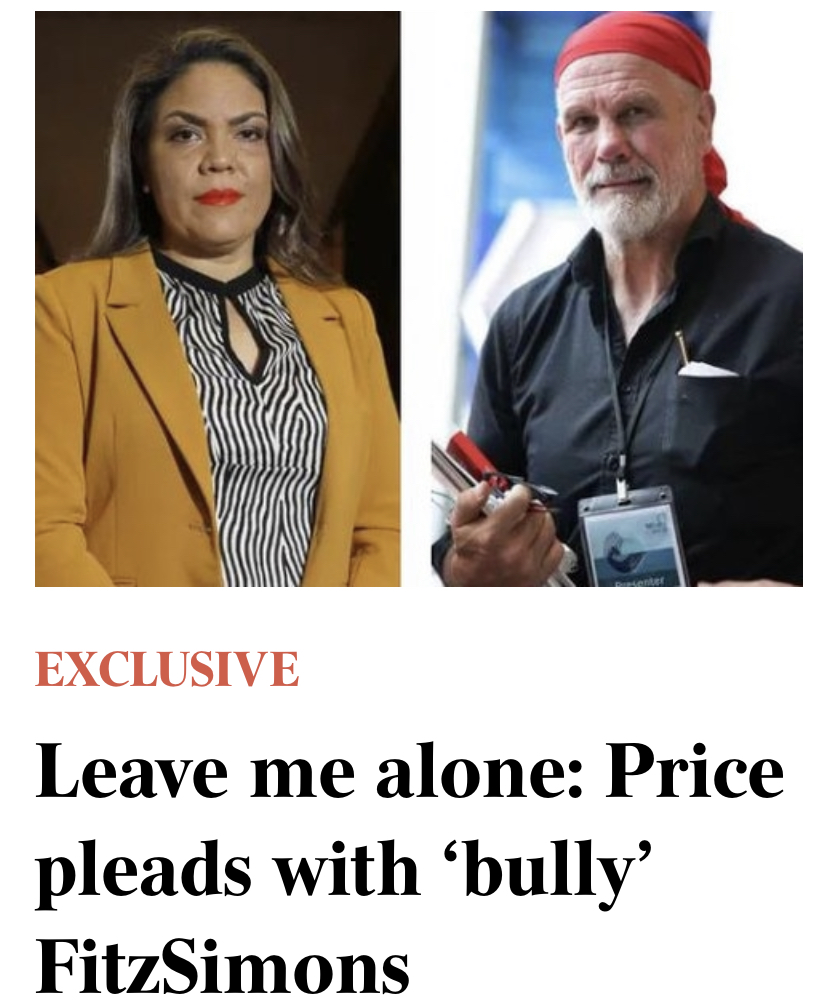 She has since told The Australian FitzSimons was “condescending and rude” towards her, however the author has firmly denied her allegations.

Their interview, conducted on Thursday, started off “quite well” but FitzSimons became “aggressive” as it progressed, Senator Price told the publication…

FitzSimons told The Australian her claims were “complete and utter … nonsense” and recalled their exchange as a “friendly interview, nice text exchange at its conclusion”.

He said he recorded the whole conversation, with her permission, and sought her approval before the interview, which covered the Indigenous Voice to parliament, the politician’s upbringing, colonisation and reconciliation was published.

Senator Price previously came to the defence of Pauline Hanson after she stormed out of the Senate during an Acknowledgement of Country.

She told Nine Radio she sympathised with “Pauline”, saying: “while I understand the need for acknowledgment is important, we’ve just been absolutely saturated with it”.

“It’s getting to the point where it’s actually removing the sacredness of traditional culture and practices. It’s become almost like a throwaway line.

Senator Price said she would “probably not” support the referendum when grilled about her controversial stance on ABC’s Q+A last week.

“I’ll be completely honest, there are more pressing issues,” she said, revealing her priority was to shore up education funding for Alice Springs and tackle alcoholism in Indigenous communities.

Here is the source of the latest battle in the Permanent Culture War. The globalists are making a play to alter Australia’s Constitution to create a third chamber of parliament and elevate one race above all others in Australia. They are using aboriginal identity politics as a proxy to further cement globalist control. Any opposition to this agenda is decried as “racist”.

For the upcoming period leading to the planned referendum, every element of the Permanent Culture War in Australia can be seen through this paradigm.