Queensland police and paramedics are finally getting their day in court to challenge totalitarian vaccine mandates. Yay. 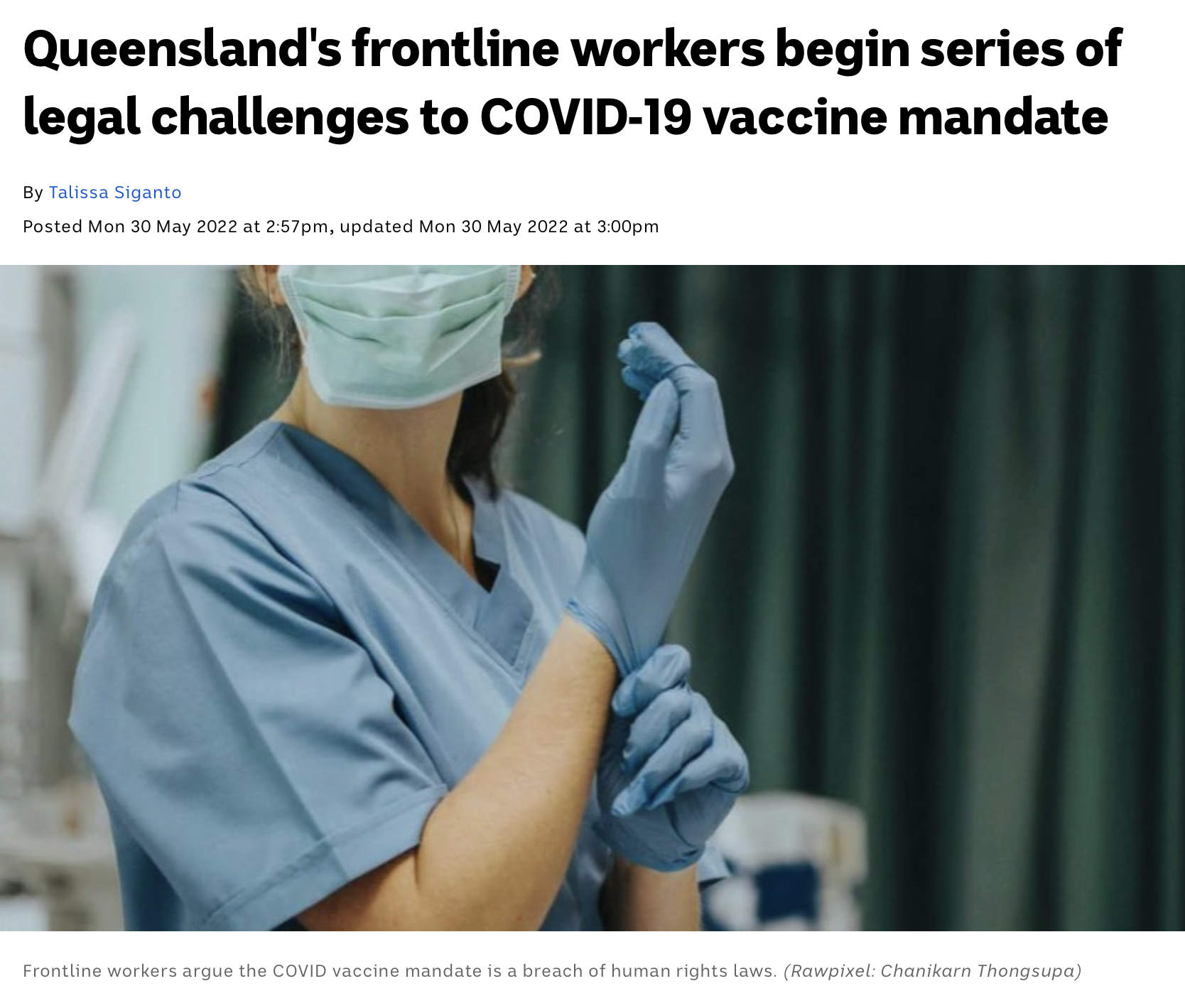 The first of several civil cases, brought on by dozens of Queensland frontline workers who are challenging their COVID-19 vaccine mandates, including police officers and paramedics, has begun in Brisbane.

More than 70 Queensland Police Service (QPS) and Queensland Ambulance Service (QAS) staff who have refused to comply with their employer’s directives, are testing the legality of the policies in the Supreme Court, arguing they are unjust or an improper exercise of power.

Some of the applicants, made up of three groups, have also claimed that similar directions made by the state’s Chief Health Officer last year breached human rights laws, but that matter will be heard at a later date alongside other similar legal challenges.

Queensland healthcare workers were required to have received two doses of the vaccine by December last year and the QPS staff deadline to be fully vaccinated was in January — unless an approved exemption was granted for medical and religious reasons, or exceptional circumstances.

During opening submissions on Monday, Dr Christopher Ward, who represents the group of QAS staff, told the court the workers were being “singled out” by the policy, highlighting the fact that mandates had lifted in other industries.

He also argued vaccines had “no measure of effect” on reducing transmissibility of the Omicron variant.

“Restrictions on liberties for the overwhelming majority of the Queensland population have been relaxed,” he said.

“Yet this small group of employees remain subject to what we say was… unjustified interference on their liberties and employment.

Dan O’Gorman, who is representing one group of QPS staff, told the court the Queensland Police Commissioner’s directive was an “impractical compulsion” and in effect was asking his clients to “commit a criminal act”.

“They’re required to sign a statutory form saying that you give full and free permission to undertake the medical treatment,” he said.

“They couldn’t say to the doctor that they give their free consent… They would have to lie.”

Enough of our civilisational infrastructure still exists that determined citizens can dismantle much of the Covid Tyranny system over the next few years. Legal battles challenging the mandates and Freedom of Information submissions are a good start.

Regarding the dissemination of information, the pattern emerging is that the issues highlighted by so-called “conspiracy theorists” are laughed off until they’re not, and the Lying Press starts trying to pretend that they were saying what we were saying all along.

Thus if the lunatics in the WHO and WEF can be held off, it is entirely possible that we could go back to the way things were before. I’m not just talking “Covid normal”, I’m talking normal. Who knows, there may even be a few show trials to sate the fury of the masses.

The problem is, normal already sucked.

In the current year it is legal to murder babies but illegal to hurt the feelings of those who murder babies. Groomers are allowed to brainwash your children into mutilating themselves but if you try to stop them you’re a terrorist. The replacement of White people in our homelands is routinely celebrated but if we point out that we don’t want to be replaced, suddenly it doesn’t exist, and what is “White” anyway.

More prescient to the vaccine mandate, over the course of a decade it is entirely possible that the slow gears of the Western court system allow us to completely revoke vaccine mandates and the intricate web of Covid restrictions which allowed the lockdowns and mandates to be implemented. Perpetrators can be punished, hell we might even be able to dismantle the digital surveillance system.

The danger will then be to think that the system works.

Hundreds of millions, if not billions of people have already injected a poison which is slowly killing them. The spike in heart attacks, myocarditis and pericarditis is alarming. The health crisis affecting Australia this year – a symptom of the devastation of not-vaccine recipients’ immune systems – is another thing altogether.

This collective AIDS caused by the not-vaccines could take decades off people’s lives. The vaccine is the bioweapon. We are potentially looking at the greatest genocide of all time.

The lesson is thus that our current system of government, our legal system, and most importantly the way we have been conditioned to respond to government power does not work. It’s all wrong. It’s inverted. We must completely rethink, destroy and rebuild it.

Put simply, if there had been mass revolt, if peaceful protest had been spurned for blood on the streets and destruction of entire cities in return for no mass injections, the long term consequences of what has been allowed to occur in the last two and a half years would have been less severe.