Violence is a part of every culture and it is necessary for self preservation. It is best when used according to a strict moral code and with a sense of proportion.

White people have been tricked into disavowing violence, while always being made to feel guilty for the violence inflicted by governments past and present which do not represent us.

There are multiple forms of violence. Violence is now being done to our Australian heritage via the AFL’s aboriginal round, (as if it had not been done already by a decade of woke.) It has gone beyond having a short ceremony at the start of the Essendon vs Richmond match. It now covers two entire rounds and every team is forced to play along.

The Melbourne Football Club changed its name to “Naarm” for the two aboriginal rounds. Melbourne is named “Naarm” in all media reporting, all all commentators are expected to refer to Melbourne or even “the Deez” as “Naarm”.

Presented as a gesture of respect, it is cultural violence against Australians. A name denotes ownership. Naming a city in 1937 after the British Prime Minister William Lamb, 2nd Viscount Melbourne, granted ownership of the city to Australian subjects of the British Empire.

Naming Melbourne’s most important sporting club “Naarm”, the aboriginal name for the territory on which Melbourne was founded, implies a transfer of ownership of Melbourne back to aborigines. Like every other woke policy of the last 77 years, this has been done without any consultation of the Australian people. Inflicting this on the Melbourne Football Club for a fortnight implies that identity politics activists intend to continue the cynical strategy of the slippery slope in order to achieve a transfer of ownership of Melbourne from Australians to aborigines.

This reveals the true motive of aboriginal round and the identity politics behind it:

This cultural violence goes further. Every AFL club is expected to change its guernsey for aboriginal round. Each year a different design is chosen, meaning merchandisers can profit from identity politics. Collingwood did a reasonable job playing along, overlaying their jumper with a few gumleaves and making the black prison bars look like tree branches. 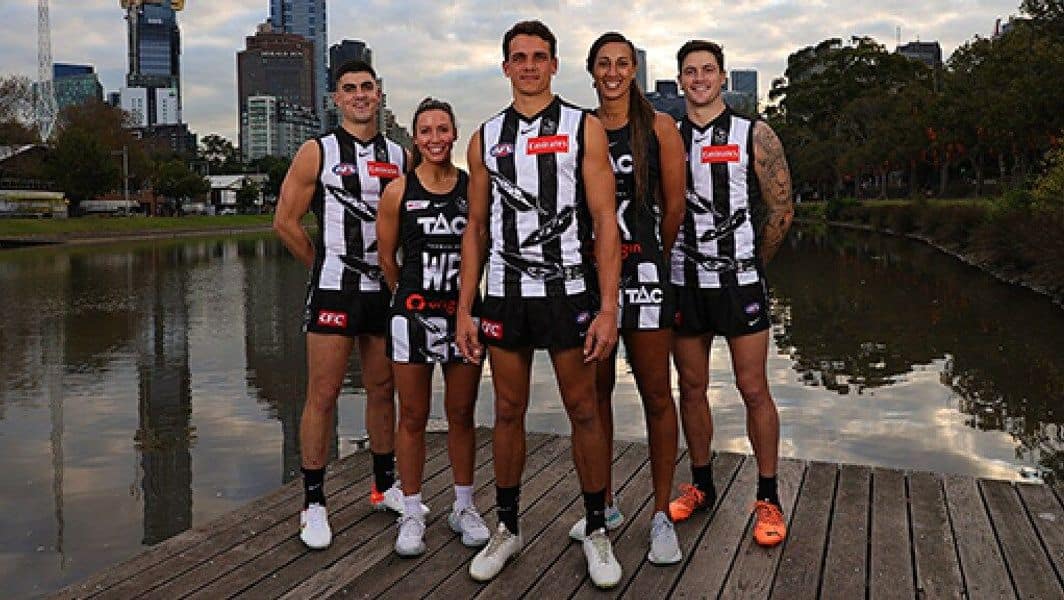 Melbourne’s jumper was an utter desecration. The jumper worn by all our great teams of the 50’s and 60’s is warped beyond recognition. It looks like something Dr. Huxtable would wear to Christmas. 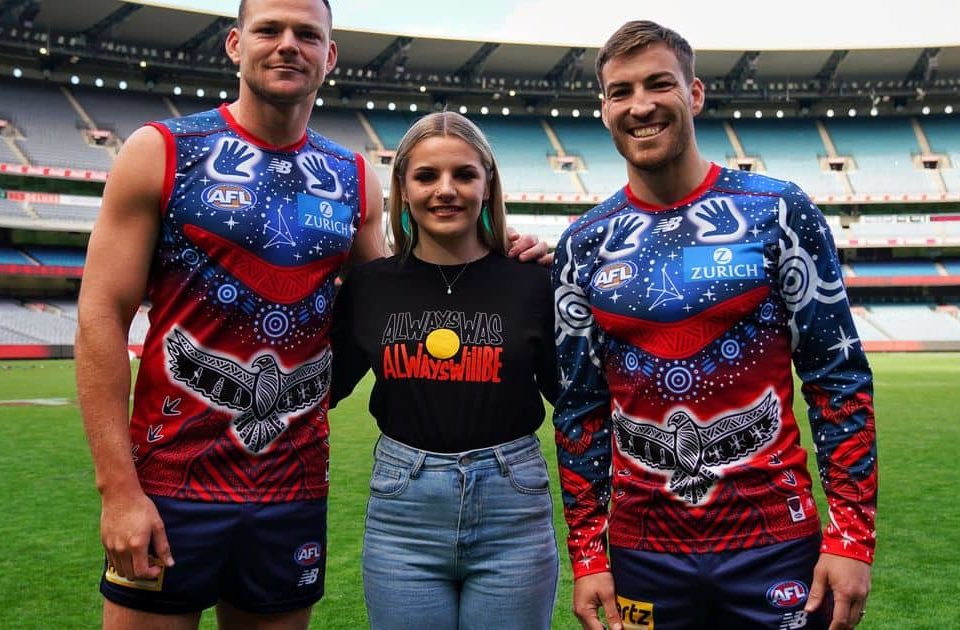 Notice that Jack Viney can’t even stand straight in that jumper, and the deliberate inversion of the colours. The players posed with a woman wearing a t-shirt emblazoned with the aboriginal flag, with the slogan “always was, always will be” embedded in the flag. The completion of that slogan is “aboriginal land”.

The politics of aboriginal round – the transfer of ownership and power – is unmistakable.

The wearing of “away” jumpers by AFL teams is bad enough. Presented as just doing what European soccer clubs do is deliberately misleading. This is deliberate change for the sake of change, and it alienates us from our past and from our heritage in the same way as does knocking down beautiful old buildings and replacing them with ugly ones, replacing simple words with other, longer, more confusing words, or changing our national anthem and then changing words in that anthem.

Even without the identity politics overlaid, change for the sake of change is designed to disconnect us from our past and any sense of who we are. 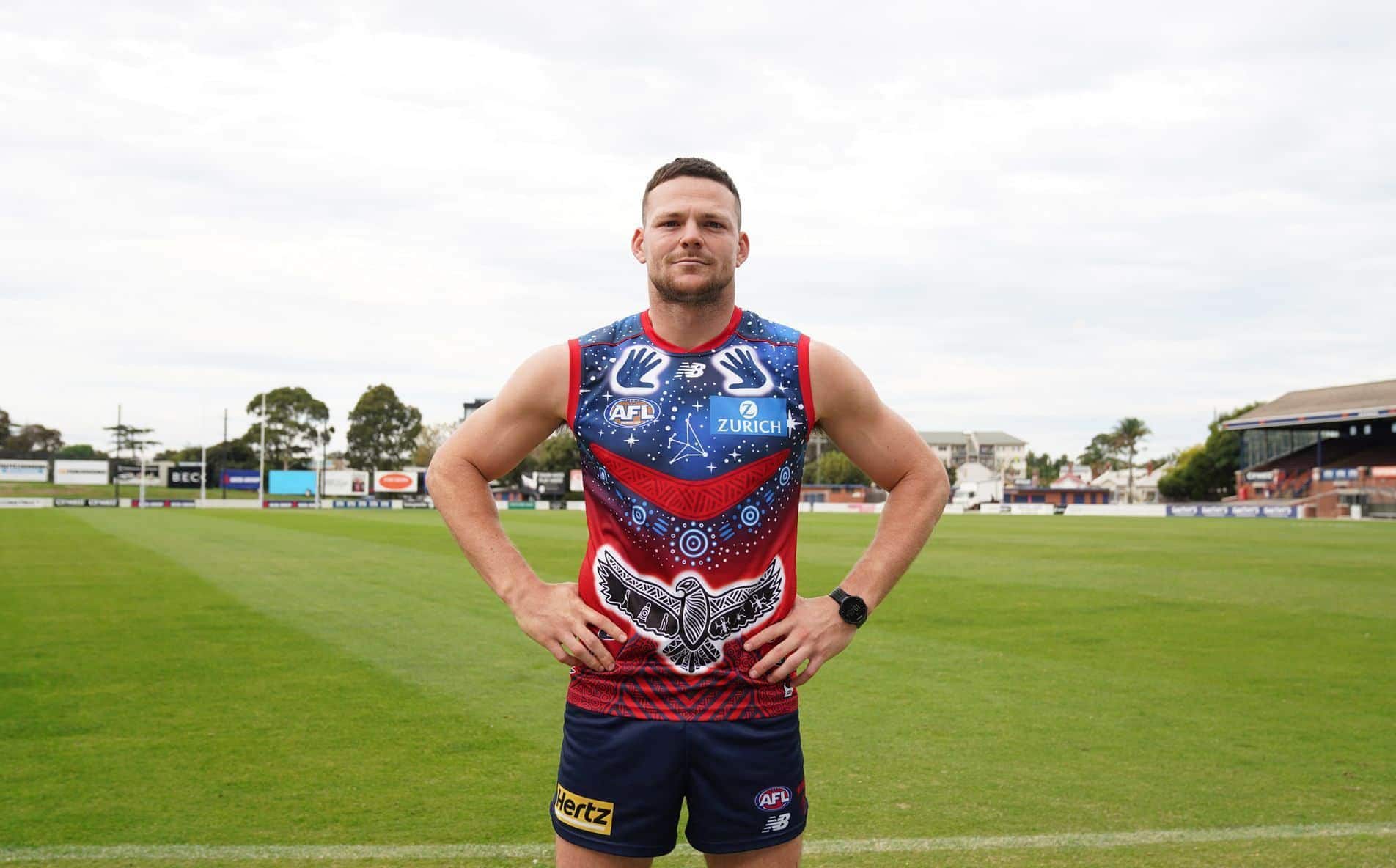 Considering the political context, it is the equivalent of burning the Australian flag. Worse, all players are expected to wear the desecrated jumper and represent their renamed club for a fortnight.

This is deliberate cultural humiliation of White Australians.

But we just take it. People still go along to the football. The distraction of bread and circuses was nothing compared to this. This is the perversion of something we used to do for fun on the weekend which over the course of a century became a genuine celebration of our culture, into a form of ritual abuse where we are expected to celebrate our own slow, invisible suicide.

On the subject of the violence of aboriginal culture itself, aboriginals conducted a coming of age circumcision ritual typical of tribes which subsisted in environments with limited resources. The literal torture of the ceremony and mutilation of the genitals was intended to limit birthrates. The practice of spearing the legs is a punishment still carried out in aboriginal communities allowed to practice “traditional justice”.

However, these forms of ritual violence pale into comparison with the disfunction of aboriginal communities. It has led to high incarceration rates and more attention to aboriginal deaths in custody (although they die at similar rates to non-aboriginal prisoners.) The politicisation of this issue hampers policing of aboriginal crime. Police and the courts are hesitant to enforce the law, enabling further aboriginal lawlessness.

The root cause of this disfunction is actually the one thing aboriginal identity politics activists are correct about:

Australia was invaded and conquered by the White man.

Our ancestors merely did what literally every other race on the planet has done, including the aboriginals themselves, who wiped out the pygmies and megafauna which came before them.

This caveat does not change the fact that aboriginal people are a defeated people living on conquered land. It must be incredibly demoralising. Neither conservatives nor the left have a solution to this problem. Conservatives effectively want to make aboriginals the same as us, accept their conquest, start their own business or something and become part of the homogenised globalist hell that is the modern West. The left merely want, as stated, to transfer ownership back to aboriginals and make White people the defeated, demoralised people.

Under these circumstances, I feel no obligation to offer a solution. I merely point out the facts.

We cannot expect any of this frank acknowledgement of the facts with regards to the violence which erupted at the MCG at the match between Essendon and Richmond on Saturday night. Over 50 people were arrested, and a didgeridoo was used as a weapon in an assault. That is important. It is forbidden to bring an umbrella to the MCG, under the explicit pretext that it may be used as a weapon. Yet on the one night of the year when you can take a didgeridoo into the MCG, it gets used as a weapon.

Already the debate is being framed in a format designed by our enemies to distract from the real issues. Pithy comments about “aboriginal culture” are labelled “insensitive”. Both sides are trained to view the other side’s response as revealing a two-dimensional understanding of the issue.

However, Adam Piggott’s Ode to Perth (whose Don’t welcome me to my own bloody country is also essential reading) reveals that one does not preclude the other:

“The exception to this were the aboriginal kids. The town versions were trouble, big trouble in a very dependable way, so you avoided them and if something became unavoidable you stepped up and gave it your best shot to finish it as fast as possible. The country versions were the opposite side of the coin, great kids with intimate knowledge of the paddocks and brush swept forests and scrub land, such that a day spent in their company was a continual process of acquiring knowledge of the land in which we were born.”

Put simply, we must dispense with the term “racism”. It is a term designed to make us view the world and our perceived opponents through a two dimensional lens and keep us at each other’s throats via a false dichotomy, to prevent us from viewing the world as it is and finding solutions accordingly.

When Melbourne won its first premiership in 57 years last year, the consensus was that the “Melbourne Curse” was lifted. I’m not convinced. The nickname of the Melbourne Football Club is “the demons”, shortened to “the deez”. C.S. Lewis pointed out to us the danger of minimising the threat from creatures against whom we should eternally be on our guard. This nickname has thus eaten away at us for decades.

A part of me wonders if the devil did not go, “Okay, I will let Melbourne fans have their precious premiership, but I will make them wish it never happened.”

I was unable to watch Melbourne’s premiership in person with those closest to me at our beloved MCG, because it was played on the other side of the country. Two resourceful gentlemen who tried to circumvent the ridiculous Covid restrictions were jailed for months for their troubles. This year the club is at the forefront of our cultural humiliation.

I don’t regret our premiership, nor that we currently have the most dominant side I have ever seen. However, a name gives ownership. I believe we need to drop the nickname of “the demons” and do a lot of prayer.