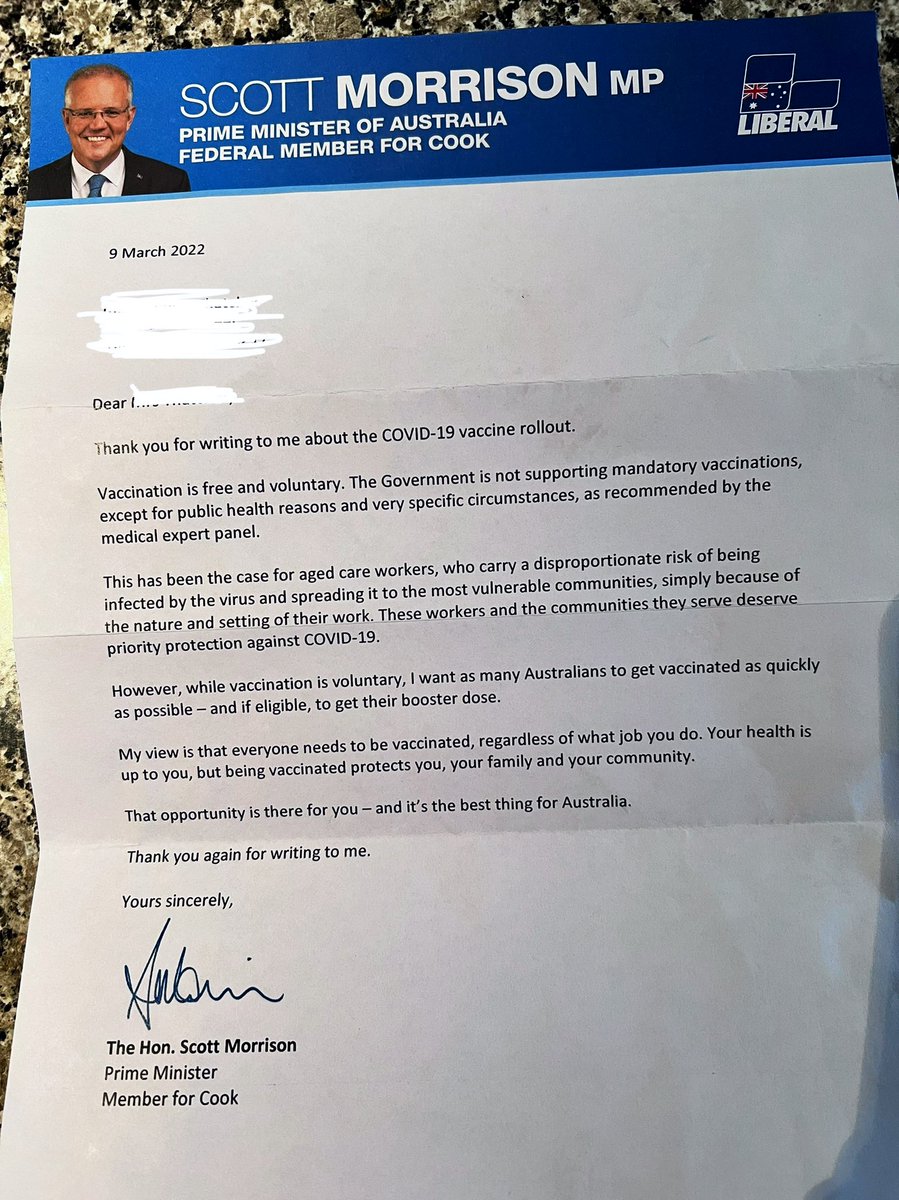 There was conjecture as to whether this was the official line, or perhaps an intern had just done a cut and paste without telling anyone.

It turns out it’s official policy. Scott Morrison is sticking to the excuse that because he is only the Prime Minister, he has no power to prevent state premiers and employers from forcing people to inject poison if they want to keep a roof over their heads. (Second video):

@ScottMorrisonMP Your government fully supports these state vaccine mandates,
That’s why you used the state’s to implement them at national cabinet.
If you want to prove your government’s innocence just release the national cabinet minutes for the last two years? pic.twitter.com/sZPRVSrJWs

“The Australian government, my government, has only supported vaccine mandates for aged care workers, disability workers, and those in high-risk health settings.”

“Every other vaccine mandate has been imposed unilaterally by state premiers, with no endorsement of the Commonwealth government.”

The hypocrisy is obvious. When the unvaccinated Novak Djokovic was lured to Australia so the federal government could deport and humiliate him in order to look tough on border security, Daniel Andrews said it was the federal government’s call, not his. Thus federal and state governments work in tandem to enforce vaccine mandates while conveniently shifting blame to the other whenever questioning gets too close to the mark.

More fundamentally, the so-called National Cabinet is unconstitutional. In Victoria, Question Time in state parliament was cancelled, and Premier Daniel Andrews did deals with minor party members and independents to grant himself emergency powers. People were censored and arrested for things they wrote on the internet and police used unprecedented violence against peaceful protesters. Coercing people to undergo “medical” treatment against their will goes against the Geneva Convention.

Keep in mind however that this is exactly how democracy is supposed to work. The idea of “checks and balances” in a democratic system assumes the existence of competing gangs of armed thugs vying for supremacy. These competing gangs drive the country into debt by bribing the populace to like them every time they need their vote, while reassuring us that this means we are a democracy and thus have the best system of government in the world.

In 2022 we are discovering a reason the mandates were introduced was to help create weaknesses in the food distribution chain. The War in the wheat-rich Ukraine will place further pressure on food prices, supplies and distribution.

A period of chaos is coming, followed by the restoration of a Monarchy which answers to God. I still cannot say whether or not it will be preceded by a genocidal period of starvation and digital totalitarianism.